Today, Starbucks is becoming a media company. The company this morning debuted its first-ever original content series called “Upstanders” which aims to inspire Americans with stories of compassion, citizenship and civility at a time when our nation could use a reminder of our core values. The series features podcasts, written word, and video, and will be distributed via the Starbucks mobile app, online, and through the company’s in-store digital network.

There are 10 episodes in the series, which was written and produced by Starbucks Chairman and CEO Howard Schultz along with Rajiv Chandrasekaran, Starbucks executive producer and a former senior editor of “The Washington Post.”

The company’s plans to delve into media were previously reported, when Chandrasekaran left the newspaper in order to form a new production company in Seattle, where Starbucks is headquartered. Starbucks didn’t invest in the company, but backs select projects tackling social issues. 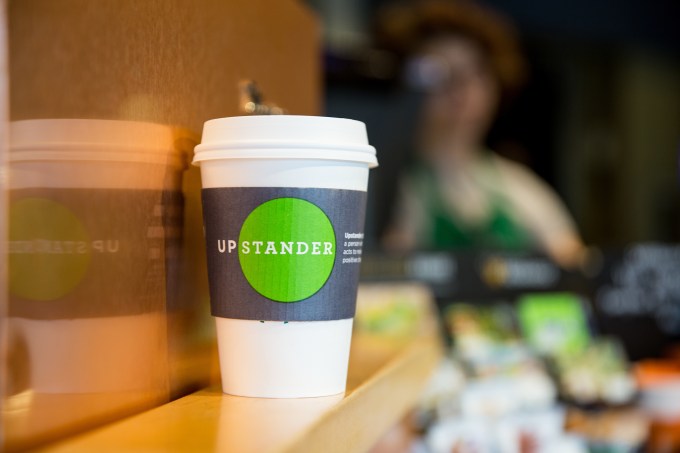 “We’ve asked ourselves what is the role and responsibility of a public company and, as citizens, how we can catalyze hope in a time when we need more optimism, empathy, compassion and leadership,” said Schultz, in a statement about the new series. “The upstanders featured in this series are inspiring individuals whose actions are emblematic of the American spirit and what is missing from so much of today’s national dialogue. We have always been storytellers at heart, and more of these stories need to be heard. We are using our scale to share them as broadly as possible.”

Starbucks is no stranger to offering its customers an array of digital content, of course.

The company partnered with streaming music service Spotify last year, allowing customers to influence the music played in-store, as well as save those songs to your own Spotify playlists. It also teamed with Google to power its in-store Wi-Fi and digital network, which features content from a variety of partners. And the Starbucks brand has historically promoted movies, books and music inside its stores for many years.

However, it’s still unusual to see a retailer like this jump into original content – one that involves producing its own media and developing an audience for that media. The series, after all, isn’t a coffee ad. It’s a set of stories that Starbucks says are often “ignored by traditional news organizations.”

“When we turn on the news or scroll through our social media feeds, we are inundated with stories of discord and dysfunction,” explains Chandrasekaran. “But there is more to America than that. In cities and towns across the country, there are people who are courageously, selflessly, collaboratively, and thoughtfully creating positive change.”

Starbucks, at least, already has the means to distribute this new content to viewers. 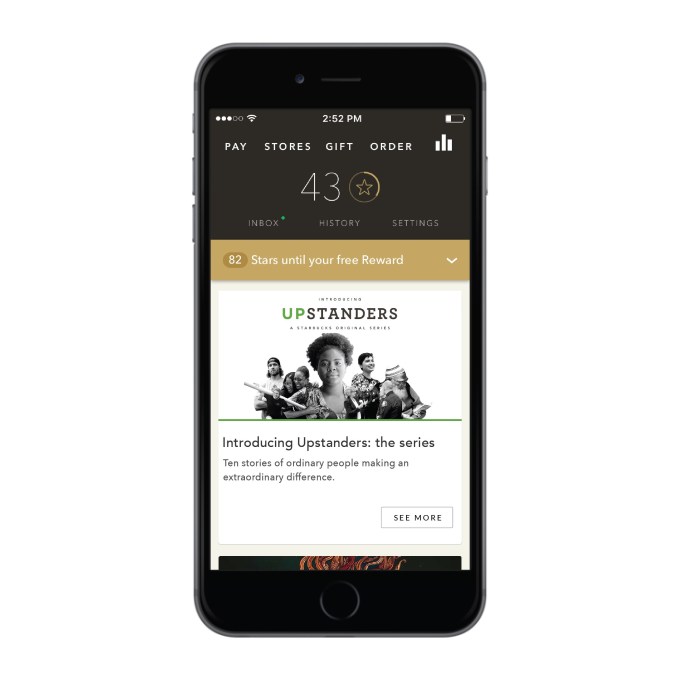 With nearly everyone who visits a Starbucks store jumping on the free Wi-Fi, it has a captive audience it can market to via its digital network; and its mobile app is today regularly launched for mobile payments at point-of-sale, card management, loyalty rewards, and mobile ordering.

Starbucks will also be promoting the new series throughout the month by hosting local Town Hall events in select markets, including Memphis, Dallas, Deerfield, FL and Washington D.C. Led by Chandrasekaran, the events will invite both local citizens and civic organizations to join, and will focus on how we can do more to create positive change in our communities.

As for the series itself, “Upstanders” includes ten stories that touch on topics like homelessness, food waste, the role of police, autism, wounded warriors, poverty, hostility towards Muslims, and more. Each week, an audio version of each story will also be made available for download through the Upstanders website, as well as on iTunes where they’re published as podcasts. These audio versions feature Schultz and Chandrasekaran discussing the current episode and sharing their own personal reflections.

The website additionally includes a social campaign, powered by Fotition, which encourages visitors to nominate others in their community making an impact as well as upload a photo of themselves to join the movement. TurboVote, is featured on the site, too, to help visitors get registered to vote in under five minutes.

The Mosque Across the Street: When an Islamic center purchased a plot of land opposite a church in Memphis, Tennessee, the local Muslim community expected hostility. Pastor Steve Stone had something else in mind.

Breaking the Prison Pipeline: Susan Burton, who spent years in prison, is determined to keep other female ex-convicts from returning to prison by giving them a place to live that’s free of drugs, alcohol and abusive relationships. She has helped hundreds of them start new lives.

Homes for Everyone: Faced with a growing homeless population, Utah changed the way it provides shelter to those on the streets.  Under Lloyd Pendleton’s leadership, the state has reduced its chronic homeless population by 91 percent.

Scholarships for Every Student: In Baldwin, Michigan, college wasn’t in the cards for most high-school graduates — until residents did something remarkable: They banded together and raised enough money to provide every student with a scholarship.

The Kids Who Killed an Incinerator: Seventeen-year-old Destiny Watford’s decision to stand up for her community and oppose the construction of an incinerator led to an improbable series of events that would stun her neighbors and everyone connected with the project.

The Hunger Hack: In the United States, 40 percent of the food supply is wasted. College student Maria Rose Belding created a web-based solution that saves tens of thousands of pounds of food each year.

The Empathetic Police Academy: Susan Rahr is transforming the way police officers are trained in Washington State. Instead of preparing them to wage a war on crime, she wants them to become guardians of the community.

Employing the Full Spectrum: John D’Eri set out to find a job for his autistic son, Andrew. His journey led him to open a car wash where 85 percent of the employees are on the autism spectrum — and business is booming.

A Warrior’s Workout: Former pro football player David Vobora gave up a lucrative career in private training to work with wounded warriors. His workouts have brought them new strength and inspiration.

Building Homes. Building Lives: After spending his teenage years in and out of jail, Robert Clark turned his life around. Now he’s committed himself to helping the at-risk youth of Newark do the same, by leading them in building homes for poor families.