We already know that it’s water resistant, has stereo speakers, and has a brand new camera (because Apple accidentally tweeted about it earlier today). But Apple is finally unveiling the next-gen iPhone officially, and everything seems fairly in line with what rumors have been suggesting all summer.

The body is quite similar to the iPhone 6s, but it’s SHINY! Essentially, they used robots to spin the aluminum bodies through sand to make it insanely shiny. They call it “Jet Black.” It comes with a stainless steel Apple logo and the body is supposed to merge seamlessly with the glass display. 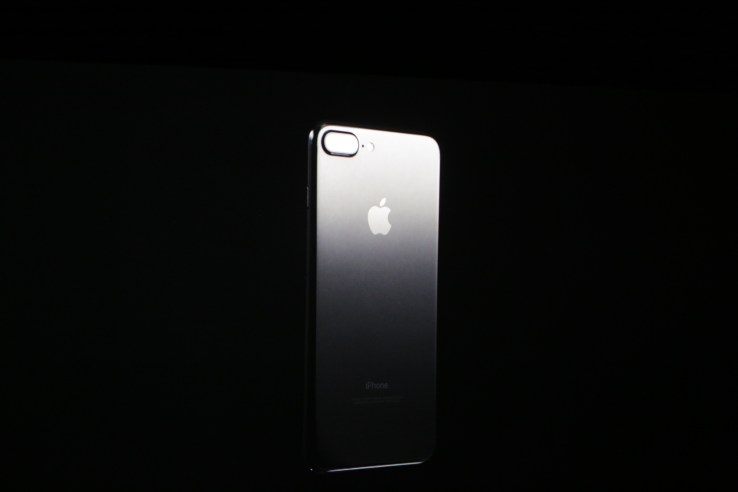 There’s also a “black” model, which comes with a black Apple logo, along with your standard gold, rose gold and silver options.

Essentially, the black will come in both matte and glossy. 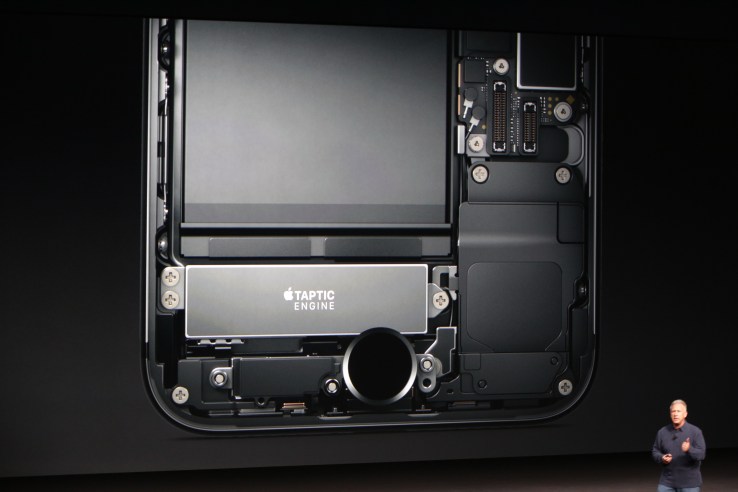 The new iPhones will be more durable than any that have come before, at least when it comes to serious corruption from water and dust. The next-gen models meet the IP67 protection standard, which is good enough to briefly drop it in a pool (or, more likely, a toilet) but not good enough to shower with regularly. 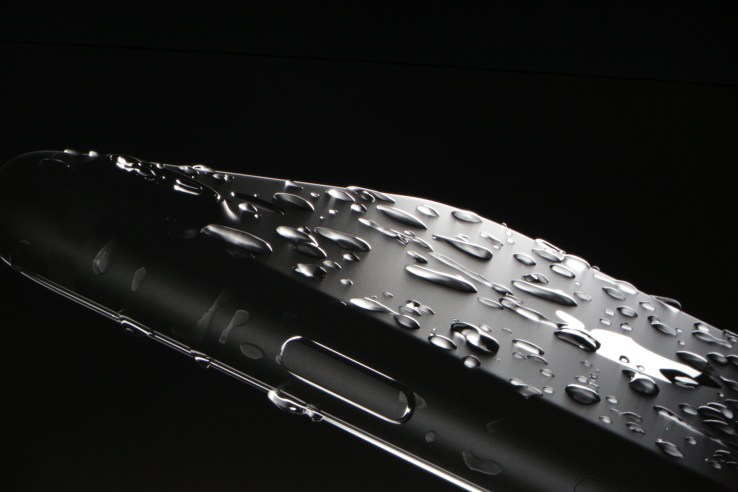 The new iPhones will have optical image stabilization, allowing for up to 3x longer exposure. The iPhone 7 camera has a six-element, 1.8 aperture lens, a 12 megapixel sensor that is 60 percent faster, with a quad-LED flash with 50 percent light output. Plus, the iPhone 7 will have a 7-megapixel front camera, up from a 5-megapixel camera on the iPhone 6s.

But, as I’m sure you’re wondering, that doesn’t account for all those dual-lens camera rumors we heard all summer.

Enter the iPhone 7 Plus, which comes with two 12-megapixel cameras on the back. The dual-lens setup allows for both wide angle and telephoto — one lens handles 1x zoom and the other hands 2x zoom.

Users can simply tap on the screen of the camera app to zoom 2x, automatically focusing on the region that was tapped. Beyond 2x zoom, you head back into the realm of digital zoom. All in all, the iPhone 7 Plus will go all the way to 10x zoom.

The dual-lens camera, and a forthcoming “Portrait” feature, will offer DSLR quality bokeh, or shallow depth of field (that blue you get behind someone when you take their portrait with a high-end camera).

Let’s just get the display info out of the way, since there isn’t much news there. The new iPhone displays will be 25 percent brighter, with wide color range and continued support for 3D Touch.

Now to the good stuff:

The new iPhones now come with stereo speakers, and we’ve finally confirmed that the 3.5mm headphone jack is gone. Instead, Earpods will connect via the Lightning port. Lightning Earpods will be included in the box, and so will an adapter for folks who are invested in 3.5mm compatible headphones.

In short, Apple needs more space for things like taptic engines and dual-lens cameras, and needed to get rid of the 3.5mm port for something more versatile, like the Lightning port.

More importantly, Apple is introducing a wireless option with the AirPods.

You can double-tap the AirPod to activate Siri, and the AirPods offer up to 5 hours of playback before needing a charge.

This is all made possible by Apple’s first wireless chip, the W1, which will also be featured in a new wireless Beats headphone. Apple hasn’t yet announced pricing for the AirPods, nor have they said whether they’ll be included with the iPhone 7. (That’s doubtful, seeing as the iPhones have Lightning-based EarPods included in the box.)

The biggest piece of news here is that the next-gen iPhones will support felica, the NFC technology used in Japan. Japan is a big mobile payments country, and Apple’s rollout of Apple Pay there is a big step towards the progress of mobile payments as a whole. 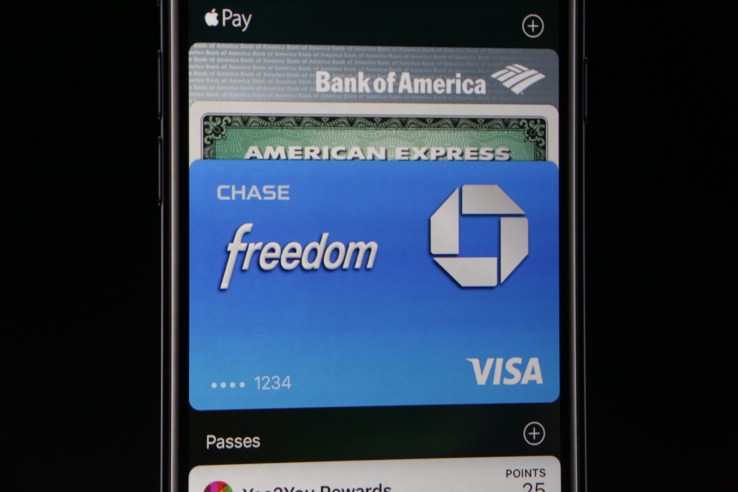 With each new iPhone comes a new processor, and the iPhone 7 is no diffrent. The new A10 fusion has a four-core CPU: two high-performance CPU cores (each 40 percent faster than the A9) and two high-efficiency cores that run at one-fifth the power to save battery life.

A new performance controller determines which apps run on which core.

And far more importantly, the new iPhones both have the best battery life of any previous iPhones.

Here is the read-out on hourly battery usage based on activity: 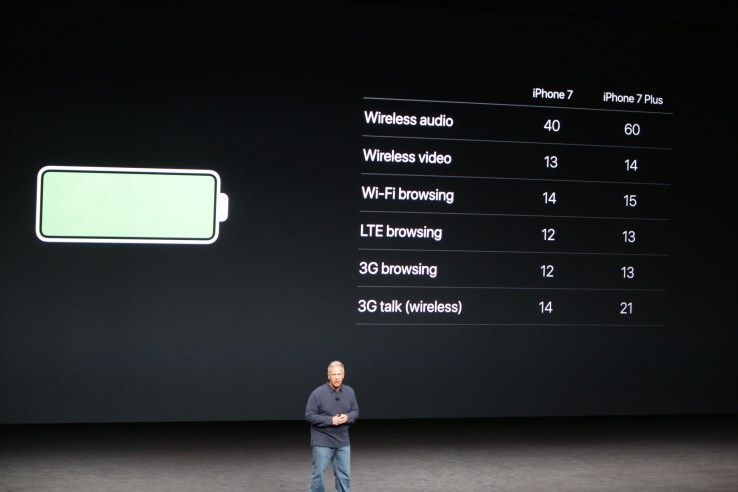 The iPhones are staying at the same price points, but upgrading storage capacity. The 16GB model is gone, and the configurations now go from 32GB to 128GB to 256GB. The iPhone 7 starts at $649 unlocked and iPhone 7 Plus starts at $769.

The iPhone SE will be the only 16GB model, while iPhone 6S and iPhone 6S plus will now start at 32GB. Pre-orders start on Friday, and store availability starts on September 16. 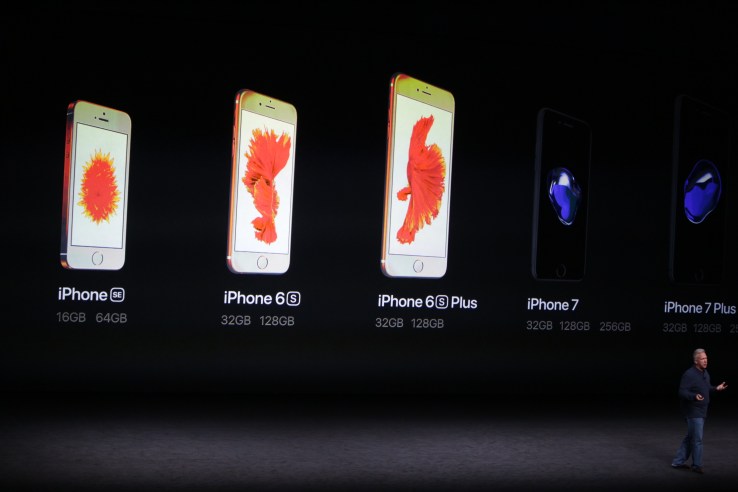 We’ll be updating the post as we learn more. Please refresh.