Nonagenarian cover girl, designer and fashion icon Iris Apfel turned 95 yesterday, and spent part of her birthday sharing with TechCrunch her thoughts about creativity and technology.

If you think you’re not familiar with Apfel, you probably are. Her influence in textiles, interior design and fashion is longstanding. As The Metropolitan Museum of Art wrote of her:

“Her originality is typically revealed in her mixing of high and low fashions – Dior haute couture with flea market finds, 19th-century ecclesiastical vestments with Dolce & Gabbana lizard trousers. With remarkable panache and discernment, she combines colors, textures, and patterns without regard to period, provenance, and, ultimately, aesthetic conventions.” 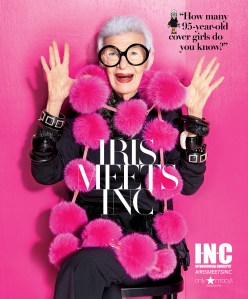 Apfel is also an entrepreneurial success story. Along with her husband, Carl Apfel, who died in 2015, she co-founded a luxury textiles manufacturing business called Old World Weavers now owned by Stark.

Recently, Apfel partnered with Macy’s I.N.C. International Concepts’ fall line, and along with the clothing, created a digitally forward-thinking accessory, Iris Meets I.N.C. emojis and stickers. The emojis are available for free download on iOS and Android.

And the emojis and stickers go right along with that look. They are mostly illustrations marked by few bold colors, depicting Apfel herself in her over-sized, round eyeglasses, or the clothing and accessories she’s designed and included in her work.

Apfel admitted, in a video produced by Macy’s, “I’m a little old for emojis and I didn’t know what they were. But everybody seems to like them, so I want everybody to have a good time.”

In a separate TechCrunch interview, she said that new technology hasn’t impacted her design work much over the years, or allowed her to be more creative — not when the internet or 3D printing came along, not when emojis or Instagram did, either.

“No. Big no,” she said to that question.

The only technology she’s longing for today isn’t some new wearable or design app.

“[I want] something to stop young people from pressing so many buttons. Why are people so lazy? Someday, there’s going to be technology invented to do everything for you. You won’t even need to think anymore,” Apfel said.

She did really like her old mobile phone. Smartphones? Not as much. 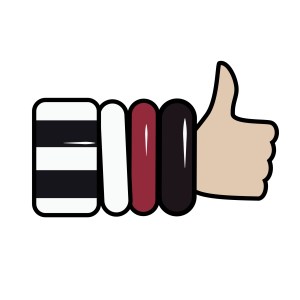 “I used to have a nice little clam shell phone, and it fell in a bucket of water, so people rushed out and got me this iPhone, which has so many things that I don’t need. It’s too smart for me. It does everything but dance.”

Happy belated birthday, Ms. Apfel. We will take your comments to heart, and try to ignore our phones today in favor of offline interactions.

Although, admittedly that’s harder to do now that your emojis and stickers are in hand.

By the way, we’re not the only ones enjoying the Apfel emojis and stickers — Macy’s reports that the emoji keyboard has been downloaded 20,500 times and counting since it debuted early this month.