Google is kicking off registration for its first-ever festival aimed at celebrating indie games on Android. The company is now taking sign-ups for those who want to attend the Google Play Indie Games Festival in San Francisco, and it’s announcing the exhibitor line-up. This includes 30 games, half of which have yet to be released to the general public, or are still in a limited beta.

The company unveiled its plans for this event earlier in the year, explaining how the festival would allow developers to show off their titles to the public, network with others in the industry, as well as compete for prizes which include things like Google ad campaign support or even tickets to its annual developer conference, Google I/O.

Admission to the event is free, and the public will get the chance to vote on their favorite games at the event, says Google, as well as play the yet-to-launch titles.

Submissions were opened up to U.S. and Canadian game developers who had 15 or fewer people on staff – which is how they qualified as “indies.” Google says over 200 developers applied for the event.

In addition to votes from players, a panel of judges will help select the festival winners.

The event is also being emceed by veteran game designer Richard Lemarchand, who was lead designer at Crystal Dynamics and Naughty Dog, and is now Associate Chair and Associate Professor at the University of Southern California, School of Cinematic Arts, Interactive Media and Games Division.

Promoting indie app developers is something that both Google and Apple have been focusing more heavily on in recent months. Google, for example, launched a section on Google Play called “Indie Corner.” And “Best Standout Indie” was one of the awards handed out at this year’s inaugural Google Play Awards held at I/O. That event aimed to highlight some of the best, new games and apps on Google’s app store.

Apple, meanwhile, launched a developer site this year that teaches newcomers how to navigate the app business through guides, videos, and case studies; it opened a design and developer accelerator in India and one in Italy; and it’s revamping the App Store with things that could help developers get their apps better exposed, like Search Ads and personalized recommendations.

The companies are making these efforts because building a sustainable, profitable app business has become more challenging over the years, where big advertising and marketing budgets are often required to acquire the users an app needs to become successful.

Google Play’s store, in particular, has a large role here – over the past year, more than 65 billion apps and games were downloaded from the store, the company says.

Google’s festival is being held September 24, at the Terra Gallery in San Francisco. Below, are the 30 exhibitors: 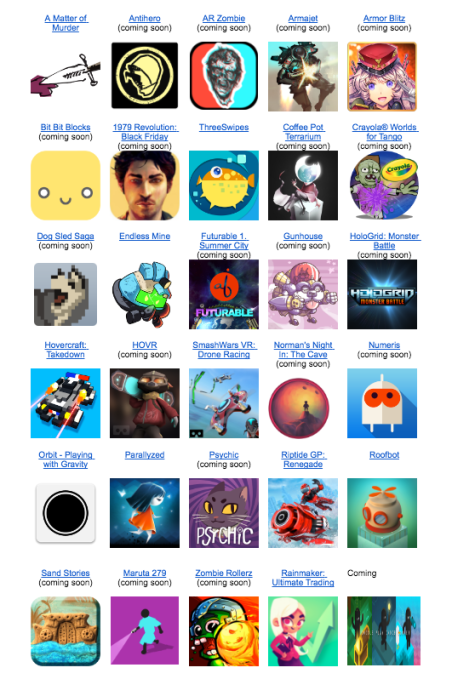 Google previously held a similar, but smaller, event in South Korea last month. Following September’s event, however, it plans to run more in other regions. Google also tells us that it believes a live event helps developers expand their network of fans, which is better face-to-face, as well as get real-time feedback and improve discoverability for their game by building buzz.