For the first time, astronomers have discovered a planet orbiting our sun’s nearest neighbor. The newly identified exoplanet (a planet outside our solar system) is officially the closest known exoplanet to Earth, located at a distance of 4.25 light-years away.

They’re calling it Proxima b, and it orbits around our nearest stellar neighbor, Proxima Centauri, every 11 days.

Astronomers believe Proxima b is a rocky world that’s a bit more massive than the Earth. Best of all, it’s at the right distance from Proxima Centauri to support liquid water on its surface. For these reasons, Proxima b may just be the closest planetary host for alien life. 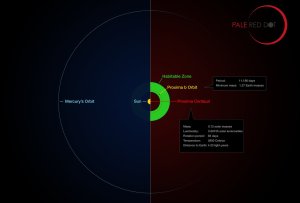 Compared to our Sun, Proxima Centauri is a smaller, cooler star. In the infographic above, you can see the area highlighted in green, which marks the Goldilocks Zone where liquid water could exist on a planet’s surface (an important ingredient to support life). This zone represents an area that’s not too hot and not too cold, but just right to allow for liquid water to exist.

Compared to Earth, Proxima b’s orbit is unique. It takes about 11 Earth-days for Proxima-b to complete one orbit around its star and astronomers believe that it’s very unlikely that Proxima b has seasons. 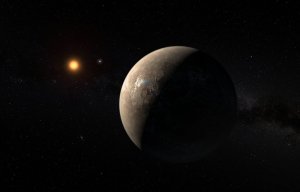 Also, because it orbits so closely to its star, it’s possible that Proxima b is bombarded with ultraviolet and X-ray flares from its host star, making the existence of life (as we know it) potentially more difficult.

Proxima b is far from the first exoplanet to be discovered. Astronomers around the world have confirmed the existence of over 3,000 exoplanets to date.

But Proxima b is special. It’s a planet similar in mass to the Earth in the Goldilocks Zone that we discovered around the solar system’s nearest star in our galaxy.

“Many exoplanets have been found and many more will be found, but searching for the closest potential Earth-analogue and succeeding has been the experience of a lifetime for all of us.” Guillem Anglada-Escudé, led the team of astronomers in the Pale Red Dot campaign to observe nearby stars

Not too long ago, astronomers weren’t sure how common exoplanets in general were – let alone ones similar to Earth, which were assumed to be unique and probably very rare. And now we’re finding an Earth-like planet in the next stellar neighborhood?

All of this makes the search for life elsewhere in the universe more exciting and more plausible than previously thought.

Discovering the existence of Proxima b is just the first step. Astronomers will now go to work to conduct follow-up observations of the Earth-like planet. With what they know now, scientists believe that Proxima b is one of our best targets to hunt for evidence of life elsewhere in the universe.

And if they find anything? Well, 4.25 light-years is a long distance away, but projects like StarShot are already working on the technologies to travel to nearby stars like Proxima Centauri. So, in case we ever do answer the age-old question “Are we alone?”, we just might have a chance to go check it out for ourselves.