Many of today’s fashion applications are targeted toward women, but a new app from Looklive wants to help men look great, too, without needing to be a fashion expert. Instead, the company – which is now also available as an iOS application – lets men shop the looks from their favorite celebrities and other style influencers. They can then buy exactly what those celebs are wearing or something similar, but more affordable.

If that concept sounds familiar, that’s because the recently revamped app Craves is doing the same thing, but for both women and men. It also uses a visual search technology to find items like the ones in photos you snap and upload.

Looklive, however, focuses only on men’s fashion and celeb style to drive purchases, along with its content channels.

To find the fashion items in question, Looklive crawls the web for celeb photos, then aggregates the best for use in the app, as also determined by human editors. It then uses both data mining and image analysis to compare the celeb photos to those from a more limited number of brands the celeb is known to favor, as a starting point to matching the item to a SKU.

Of course, celeb fashion is often out of reach for most of us with more modest incomes, which is why Looklive is also assisted by an editorial team who helps to choose the bargain versions of the fashion items it features.

Today, Looklive has over 60,000 products and 10,000 images of celebrity fashion looks. The service has reached roughly 1 million monthly users, and revenue is growing at 25 percent per month. The company has reached over $120,000 monthly GMV, too.

The startup generates revenue through affiliate income, as well as from drop-ship deals with specific brands which set aside some of their inventory for a limited time, then ship directly to Looklive customers. These deals have a higher margin. And in the future, Looklive may work directly with celebs on products where it will receive the full retail markup.

Looklive has an interesting backstory, too. The company is actually the combination of the teams, technology and content of different businesses, Looklive, Curateurs and UpscaleHype.

It was Curateurs that grew to 1 million users, but then acquired Looklive, merged with them, and integrated their technologies. It also took on the name “Looklive,” to replace Curateurs. And Looklive bought UpscaleHype.com, a high-end online lifestyle magazine, to create the content channel for its new celeb-driven men’s fashion app.

Looklive (formerly Curateurs.com) was founded by Cedric Rogers, Greg Selkoe and Dr. Paul Judge. Rogers is a 10-year Apple veteran who worked on the App Store; Selkoe founded the men’s e-commerce company Karmaloop which grew to over $100 million in annual sales for six years; and Judge was a co-founder and executive at several technology companies including CipherTrust, Pindrop and Luma.

While Karmaloop had a major cultural impact in the fashion space, it eventually filed for bankruptcy. Selkoe acknowledges that the experience taught him a number of lessons about running a business.

While Karmaloop was criticized for its management style and hiring choices, Selkoe says that what he did well at Karmaloop – viral marketing, understanding the pulse of a niche and what they wanted to wear – is where he’ll focus at Looklive. 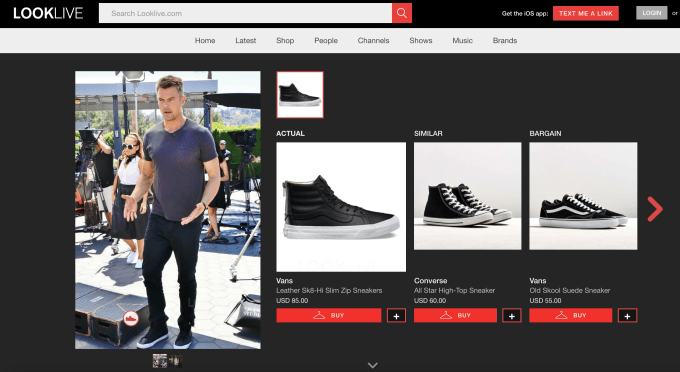 “I’m not the CEO of this company…areas where I wasn’t as strong, I’m not doing this time,” Selkoe says.”If there’s anything I learned from Karmaloop, it’s making sure we have a really well-rounded team and shared responsibilities.”

“And from a business model perspective, we learned we don’t need to carry inventory. [At Karmaloop], we got so big, in order for us to get the clothing we needed for each season, we had to outlay 15 to 20 million bucks at the time, which was always at risk. We’re not going to do that [at Looklive,” he adds.

The company has also now partnered with youth media brand Complex Media Group, which was recently acquired by Verizon (disclosure: TechCrunch parent) and Hearst in a $300 million deal. The site is known for being the fashion voice for young men, as well as being a lifestyle site focused on pop culture trends and entertainment.

With the partnership, the Looklive app will feature a “Complex” channel where images from its media library will be shoppable. This will go live in the app in the near future.

Looklive is currently participating in Y Combinator, which invested $140,000 into the business along with Judge Ventures, run by Looklive’s co-founder. The round is a seed stage investment of under $1 million, but the startup will raise again after YC’s Demo Day.

The Looklive app is a free download on iTunes. The Android version is a few weeks away.