Here’s something I asked myself a lot last weekend: Am I really a serious Star Trek fan?

The obvious answer: Well, sure. I’ve watched hundreds of hours of Star Trek on TV, I’ve seen all of the movies multiple times and I pride myself on being able to recall more random Star Trek trivia than almost (almost!) anyone I know.

And if I didn’t love Star Trek, what was I doing in Las Vegas, wandering the halls of the Rio while surrounded by thousands of costumed fans?

The reason for my visit was the Star Trek Las Vegas convention, organized by Creation Entertainment. This year marks the 50th anniversary of Star Trek’s first broadcast (on September 8, 1966), so the convention seemed like a good opportunity to take the pulse of Trek fandom. Plus, I’d get a chance to sit in the same room as Trek legends like William Shatner (James T. Kirk) and George Takei (Hikaru Sulu), and to check out some impressive costumes.

Probably the strongest feeling permeating the whole event was nostalgia — it was the kind of convention where every guest was reliably asked, “Can you share some memories?” The feeling was intensified by the absence of stars or writers from the new movies, or from the upcoming TV show, Star Trek Discovery.

That’s understandable, since the latest movie, Star Trek Beyond, was released just a few weeks ago, while Discovery is ramping up for production. And it’s hard to imagine how you throw a convention commemorating a TV and film franchise’s 50th birthday without a healthy dose of nostalgia. But it can also be worrying (at least, if you’re the kind of person who worries about things like Star Trek‘s place in pop culture) when a group of fans who are ostensibly interested in the future become obsessed with the past. 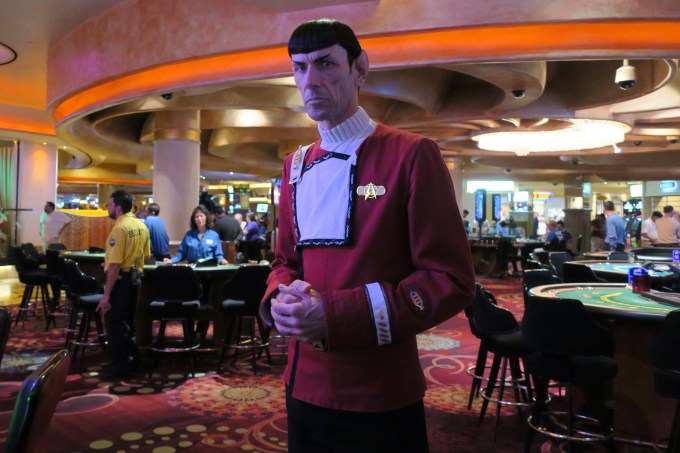 And in the case of Star Trek, it’s also no secret that some fans remain ambivalent about the new movies.

Sure, J.J. Abrams’ 2009 film made hundreds of millions of dollars and brought the franchise back from the dead. But it also created a sense that the things that made Star Trek special (the progressive ideals, the hope for the future and yes, the occasionally dull talkiness) had been replaced by a dopey plot and big-budget explosions.

Star Trek Into Darkness added insult to injury by all-but-remaking the best and most beloved Trek film, The Wrath of Khan. Again, it brought in a lot of money, but the fans at Creation’s 2013 event loathed Into Darkness so much that they ranked it as their least favorite film — even below notorious stinkers like The Final Frontier and Nemesis.

If you read my review of Star Trek Beyond, you probably got the sense that I’m one of the old fogies who’s skeptical about the Abrams films — except for Beyond. Maybe it’s just because I was so desperate for a movie that was worthy of Star Trek’s big anniversary, but the new film (directed, this time around, by Justin Lin, while still produced by Abrams) really seemed like a return to form, blending the original series’ sense of adventure and exploration with 21st century production values.

Anyway: What kind of presence did the latest iteration of the franchise have at the convention? Minimal. Like I said, the stars weren’t there, and the topic only came up glancingly in the on-stage discussions.

Takei, for example, described Beyond as “a rip-snorting soap opera, I mean space opera,” while also acknowledging that he disagreed with the writers’ decision to reveal that his character Sulu (now played by Jon Cho) is gay.

Some might see that a tribute to Takei, previously a closeted gay actor himself. But in his view, the classic show and movies provided “a lot of evidence of Sulu as heterosexual,” so changing that now distorts the character. Instead, Takei said the creative team should have introduced a new, gay character to the Enterprise.

“Be as bold as [Star Trek creator] Gene Roddenberry would have been … that’s the person that you have to pay tribute to,” Takei said.

Takei first made his feelings known on the issue before Star Trek Beyond’s release. Now that he’s seen the movie, he described the scene in question as just “a whisper.”

“If you blinked, you’d say, ‘What was that?’” he said. “That’s the new liberation we have to deal with the LGBT issues? … This is the new freedom that we have?” 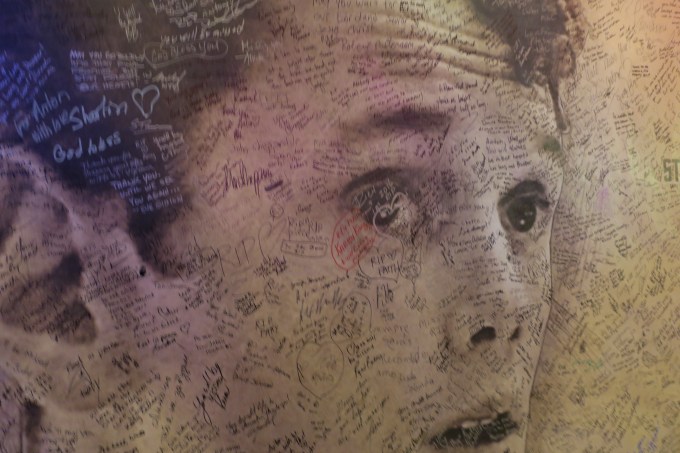 The new movies didn’t have much of a presence on the fan side, either, with the vast majority of costumes coming from the older series and films. If anything, the more obscure outfits (like the Vulcans from the Original Series episode “Amok Time,” or the man with a Ressikan flute from Next Generation’s “Inner Light”) often drew the most enthusiastic crowd.

But the fans were still interested in new Star Trek. I saw at least one woman dressed as Jayla, the major new character in Beyond. And when Gene Roddenberry’s son Rod was on-stage, everyone seemed intent on questioning him about Discovery (where Rod is one of the executive producers).

Roddenberry was quick to assure fans that the members of the creative team “get it” and will make a show that lives up to Star Trek’s legacy. But he was short on details — to the point where he actually apologized for not being able to share more. (Showrunner Bryan Fuller revealed a bit more in a conversation with the Television Critics Association a few days later.)

Instead, we got lots of reminiscing about the production of each of the shows, spiced up by hints of drama, like the much-discussed acrimony between Shatner and Takei — something Takei dismissed as “a sweet fiction” that gets brought up “whenever Bill needs to gin up some publicity.”

Don’t get me wrong — the stories were fun, but you get the sense that they’d been told plenty of times before. In fact, when Shatner was on-stage, his interviewer (Creation co-founder Adam Malin) was so obviously familiar with many of the anecdotes that the actor good-naturedly demanded, “How did you know that?” 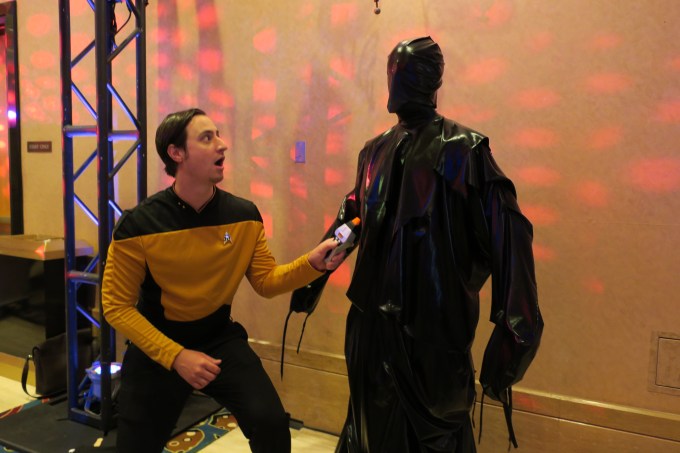 Besides the glimpses of backstage drama, the event felt most energized when it acknowledged the world outside of Star Trek. Reflecting on the grimness of recent headlines, Brent Spiner (Next Generation’s Data) argued, “As the world becomes more complicated and difficult, when you look at Star Trek and the values of Star Trek, that’s where we should be.”

Most of Star Trek Las Vegas’ energy seemed to come from the fans themselves. While Shatner was casual and relaxed on-stage (no surprise, since he’s reportedly making 31 convention appearances this year), it was clear that his presence meant a lot to the audience. One of the fans assured Shatner that he had “more friends in this room — in this world —than probably anyone,” while another shouted excitedly at the crowd, “This is William Shatner, guys! I can’t believe this! You are Star Trek.”

It was a sweet moment, but looking back on it now, I’m not totally on-board with the sentiment. Shatner was important to the show, but so was Leonard Nimoy, so was Takei, and so were many of the actors and writers and directors and other crew members who came after them. 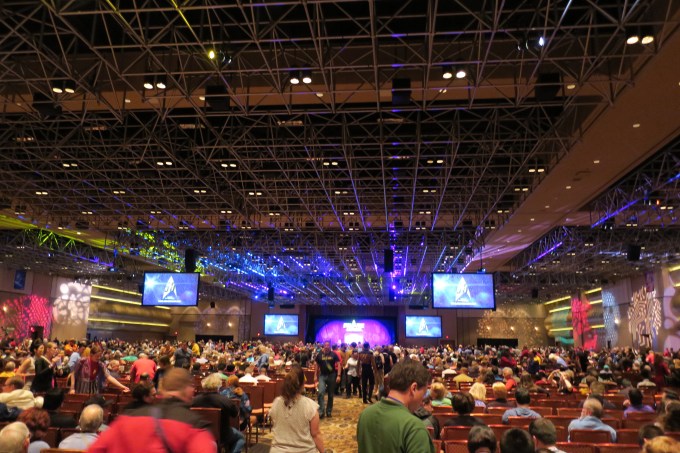 While I was in Las Vegas, I was also reading the first volume of The Fifty-Year Mission, a new oral history of Star Trek. (That weekend, I’m pretty sure every thought I had was  Trek-related in some way.) And if there’s a single idea that comes across clearly in the book, it’s the fact that no one person can claim full responsibility for Trek’s success — not even Gene Roddenberry.

I brought up this point with Marc Cushman, a screenwriter whose credits include an episode of Next Generation, and the author of These Are The Voyages, a multi-volume chronicle of the original show. By getting access to behind-the-scenes memos, Cushman said he saw clear evidence of Roddenberry’s genius — but also of the important roles played by folks like producer Bob Justman and writers Gene Coon and D.C. Fontana.

“You take any of them out, it wouldn’t have been as good,” Cushman said. “It was like God was smiling on that project.”

Of course, Star Trek has grown to be much more than a single TV show. For one thing, there are the four spinoffs (so far). One of the most enjoyable moments of the weekend involved a panel hosted by Jordan Hoffman, where fans argued among themselves to create a list of the top 10 episodes across all five shows.

While I didn’t actually take the mic, I participated from the wings as enthusiastically as anyone. I cheered as bona fide classic “City on the Edge of Forever” took the top spot, joined by favorites like “Amok Time” and “The Visitor.” And I groaned as the list was filled out by more questionable choices, driven by fans who seemed to have a mysterious love of Enterprise and the Ferengi.

While I certainly grumbled about some of the results, the arguments were fun, and they drove home how enormous the Star Trek canon has already become. Even if the franchise were to stop right now (and it won’t), there’d be more than enough material for fans to argue over for years and years.

And beyond the five shows and 13 movies? Well, there was also the convention’s exhibition hall, full of merchants selling everything from T-shirts to Star Trek beer. At one point, Brian Gardner of the local fan club USS Las Vegas tried to imagine Roddenberry walking through the aisles and saying, “Oh my God, look what I started.” 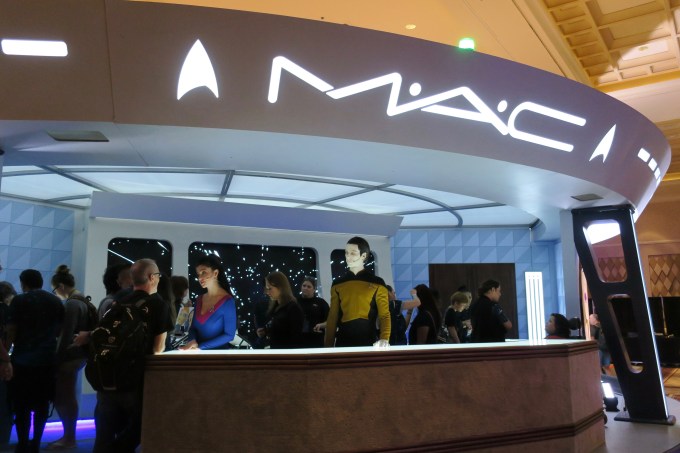 Perhaps the most surreal element of the whole event (even more surreal than nightly performances by the tribute band the Roddenberries, or the evening of Klingon Karaoke) was the giant booth set up by Mac.

That’s right, Mac the makeup company, which is releasing a line of Trek-inspired cosmetics later this year. Not only did Mac offer reenactments of scenes from the original series, but it also gave attendees the opportunity to get made up like the Trill, those many-dotted aliens from Deep Space Nine.

For most of my two days in Las Vegas, I debated whether to get the dots myself. Finally, I decided to go for it.

As soon as the friendly Mac employees started to apply the makeup, I knew that I’d made the right choice. Of course, I probably looked a little goofy as I marched out of the booth — not to mention deeply, deeply nerdy. But for the first time that weekend, I looked unequivocally like a Star Trek fan. And that’s exactly what I was proud to be.