At 1:26am ET, SpaceX launched their Falcon 9 rocket from Cape Canaveral and, once again, recovered the first stage of that rocket on a drone ship floating in the ocean. More importantly, SpaceX successfully completed the primary mission of today’s launch by inserting their payload, the JCSAT-16 satellite, into Geostationary Transfer Orbit (GTO). 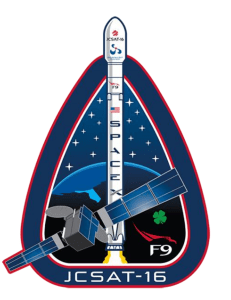 Tonight’s booster was brought back to a drone ship because their payload needed to be deployed at an incredibly high altitude in GTO. To date, the only time SpaceX has made a rocket recovery attempt back on land has been on missions to the much closer altitude of Low Earth Orbit (LEO).

The successfully deployed payload is known as JCSAT-16 and is a commercial communications satellite developed by Space Systems Loral for the SKY Perfect JSAT Corporation. It will become part of a 16-satellite constellation used to provide data-transfer communications and video distribution in the Asia-Pacific region.

With tonight’s booster included SpaceX has made a total of eleven rocket recovery attempts, six of which have been successful. Two of these boosters were recovered on land, and now four have been recovered on a drone ship out at sea. Sea-based landings are considered more difficult, but depending on SpaceX’s mission parameters, the drone ship is often their best (sometimes their only) option for a recovery attempt.

Over the course of the last year and a half, SpaceX has learned a lot from their failed recovery attempts. Sometimes the rocket came in too hot, didn’t have enough hydraulic fluid left to control its descent, or one of the landing legs didn’t lock properly causing the rocket to tip over.

But if the last five months are any indicator, SpaceX has learned quickly and is starting to get the hang of it. Since April, Musk’s company has successfully executed five out of the last six rocket recovery attempts.

So far, none of the recovered rockets have been reused on a second mission into space. However, last month one of their recovered boosters went through a test fire, SpaceX’s first test fire of a recovered rocket. While this particular rocket test will provide SpaceX with useful performance data, it won’t have the honor of flying again. That privilege will be given to the recovered booster from a May mission to the International Space Station on a yet-to-be-determined date later this year.

This year is an especially important one for SpaceX because they’ve set out to triple the number of missions they can get off the ground compared to last year. Back in March, SpaceX president Gwynne Shotwell stated that they hope to launch a total of eighteen times this year. By itself, eighteen missions may sound like a small number, but considering there were only 82 successful orbital launches in the entire world in 2015, an increase from six to eighteen launches from a single company is pretty remarkable.

Tonight’s launch was SpaceX’s eighth mission this year, meaning they’ll have to pick up the pace if they want to meet their lofty goal. With their next launch just a short three weeks away, it seems that Musk and company are already working to do just that.