The Perseid meteor shower, which comes around every year at this time, will peak tonight and early tomorrow. This year’s event is particularly special because astronomers are predicting an outburst of shooting stars at twice the normal rate. The best time to watch the show is between midnight tonight and dawn Friday morning.

Before finding a good place to lay down and look up, there are a few apps worth downloading to make your stargazing experience even better. Although, keep in mind, you don’t actually need any equipment or app to enjoy the spectacular light show, just a relatively dark location and a clear sky.

But, if you want to know what you’re looking at in the sky, find the point from which the meteors will generally radiate, predict how the sky will change throughout the night or impress your friends by pointing out planets, satellites and the location of the International Space Station — then there’s a few astronomy apps worth checking out. All the apps below were reviewed on an iPhone 5.

A great free app that will help you identify stars, planets and constellations is SkyView Free.

Like all the other astronomy apps in this article, you can point your phone to the sky in the direction you’re facing and the star-studded sky in the app will move to match it. This helps you identify objects you see in the sky just by comparing it to the real-time star map on your phone.

What’s particularly unique about SkyView Free is that it has an augmented reality function that overlays stars and constellations over the sky as seen through your camera, making it easier to match the celestial objects in the map to the real ones in the sky.

You can even hover a circular pointer over a star and it will tell you its name, what constellation it’s in and where it will move throughout the night.

Better yet, look around a bit and find the International Space Station. If you click on it, the app will show you where it’s heading. If it’s above your horizon, you might be able to look up and spot it.

If you’re searching for planets, SkyView Free has an “increase planet size” feature that makes it relatively easy to identify where they are in the sky. And, like everything else, if you click on a planet, the app will show you its path around the sky over the course of the day and night.

For $2.99 you can get an app with a few additional features. Essentially, you’re paying for the ability to find the point from which the Perseid meteors will radiate, a more visually stunning user experience, an easier way to search and identify objects in the sky and, in some cases, the opportunity to “fast-forward” and watch how the sky changes throughout the night.

Star Walk 2, Star Chart (which is free, but the Meteor Shower add-on is $2.99), Sky Safari 5 and Sky Guide are all great and generally do everything mentioned above. 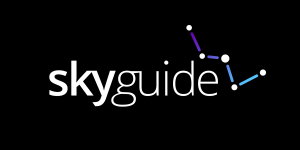 However, if I were only going to pay for one app, I would get Sky Guide. The interface here was simple, and easier to use than all the others. The two aspects of Sky Guide that I like the most are the fast-forward function and the search feature.

In order to fast-forward through the night, you need to go to your Menu, select “Time & Date” and then check “Select Time.” Simply go back to your home screen and use the buttons at the bottom to move forward or backward in time. This is useful if you want to know which constellations, stars and planets you’ll be able to see later tonight during the meteor shower. 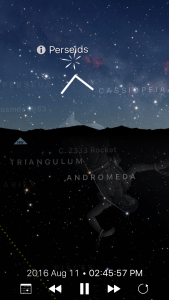 Screenshot of Sky Guide app after searching for Perseids

The search feature in the app also works really well. If you want to find the point from which the Perseid meteors will radiate, simply search for Perseids and an arrow will pop up directing you toward the location.

However, you don’t actually need to identify this location because the meteors should be visible all across the sky. It’s just interesting to locate because meteor showers are named after the constellations the meteors appear to fall from. In tonight’s case, the Perseids appear to come from the area is the sky near the Perseus constellation. 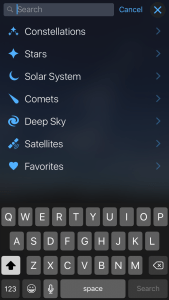 Screenshot of the search function in Sky Guide

The search feature can  be used to find just about anything else, including planets, asteroids, comets, satellites and the International Space Station. Once you select what you’re searching for, an arrow will pop up, directing you toward its location. Keep in mind that, depending on your sky conditions, it’s unlikely that you’ll find everything in the sky with your naked eye that you can see in the app.

Of course the best way to watch a meteor shower is in a dark location away from light pollution while looking at large patch of sky with minimal cloud cover. If you’re serious about finding a particularly dark location in your city, you could get the Scope Nights app for $5.98 ($0.99 to download, $4.99 to upgrade to the Dark Sky Locations feature). 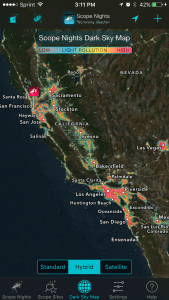 Screenshot of the Dark Sky Map in the Scope Nights app

What if the light pollution is too bad or the weather is terrible in your area? Luckily, if you can’t see the meteor shower at home tonight, you can watch it on the NASA livestream.