JD.com, Alibaba’s closest rival in China, is targeting profitability after reported its Q2 2016 earnings which, while on target with expectations, saw its revenue growth continue to flatten.

JD.com, a Fortune 500 company since June, is posting rising revenues, but the rate of growth is slowing in line with reports that Chinese consumers, while growing in number as more people come online, are spending less as the economy slows. That’s impacting companies across the board and placing emphasis on overseas growth, with JD.com courting international brands with the promise of reaching China via its platform.

The company announced net revenue of RMB 65.2 billion (US$9.8 billion) for the three-month period, up for 42 percent year-on-year.

That’s down from 47.3 percent annual growth in the previous quarter, and JD.com is forecasting that the next quarter will continue to see slowing growth. Its revenue estimate of RMB 59 billion to RMB 61 billion would be between 34-38 percent year-on-year growth. 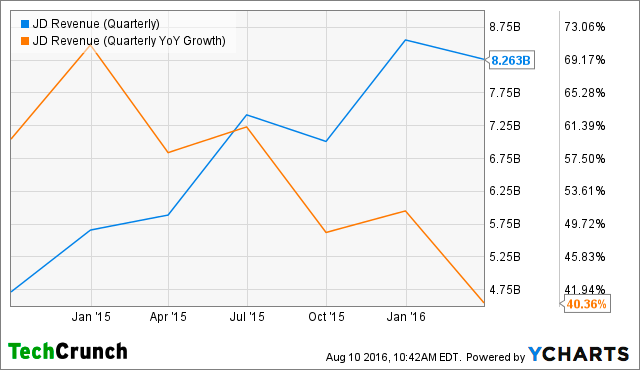 Also in its favor, it compared Q2 2016’s non-GAAP net income of RMB361.5 million (US$54.4 million) to the non-GAAP RMB246.7 million loss from one year previous. Its free cash flow hit a record of RMB 8.1 billion for the quarter and RMB 11.0 billion for the previous year of operations, and its JD.com Mall marketplace increased its operating margins nearly three-fold.

But the apparent slowdown also impacted other areas of business.

“We are pleased to record another strong quarter of healthy growth, with improving operating performance driving customer satisfaction,” said Richard Liu, JD.com CEO, in a statement.

Nasdaq-listed JD.com struck a deal to buy Walmart’s Chinese e-commerce business — Yihaodian — in June, a move that may have paved the way for the U.S. retail giant to purchase Jet.com to focus on home soil. That deal boosts JD.com’s grocery and delivery business, and that one was development highlighted in the earnings report.

“With our reputation for high-quality online shopping and same-day delivery already cemented with Chinese consumers, we are taking steps to further extend that advantage through efforts like our new strategic alliance with Walmart and Chinese online supermarket Yihaodian,” Liu added.