The change in perception you experience as a player coming back to your ship after a long trip on foot for the first time in No Man’s Sky is astounding.

I crested a ledge and saw the ship I’d left a couple of hours ago sitting exactly where I’d left it, but from above, making it look small and almost insignificant among the colorful alien landscape. When I set out, it seemed like the center of a game world mostly bounded by a cave mouth and small clearing; when I came back, it was the fly on the back of which microscopic me would explore an inconceivably vast universe.

And I’ve never been more excited about being insignificant.

A game that stretches the definition

No Man’s Sky is a new game out for PlayStation 4 today, which is coming to PC on August 12. It’s a first-person science fiction game, but it’s hard to define its category beyond that. Calling it a “space exploration sim” probably comes closest, since a lot of what you’re doing is forging a pioneer’s path through worlds randomly generated by the game’s engine, tagging flora and fauna no other human player of the game is likely to ever see.

But you could also play without doing any real identification of things you find – I actually didn’t even discover the mechanic until after about an hour and a half of exploring the surface of the planet I started off on. And you don’t really have to fight anyone to play either: I ran from virtually every confrontation I came across and made out just fine. 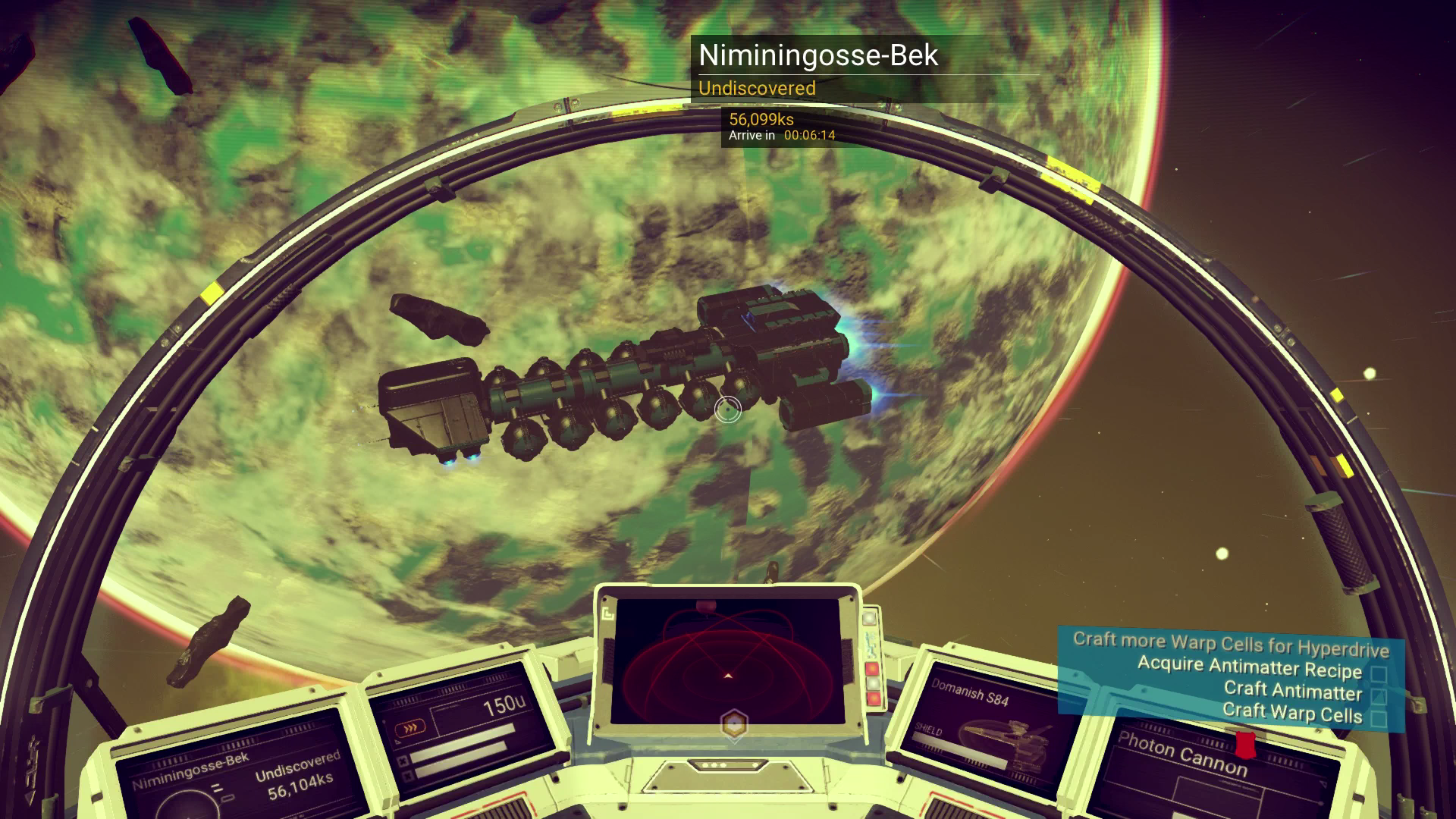 The worlds in No Man’s Sky are, as mentioned, randomly generated, 18,446,744,073,709,551,616 planets to discover. That’s not a typo, either. And those planets could host alien animals and planets, or they might not; you basically have to travel to them to find out. The universe is also populated by aliens with their own ships, and you can trade with and fight them.

It sounds complicated, and it kind of is; dropping into the game with no real knowledge about how it works or what was expected of me meant it took a while to get my space legs, so to speak. But soon enough, I was mining raw materials like a pro, collecting the ingredients necessary for me to effect repairs on my broken ship, fuel it up and broaden my horizons.

Because of how much resource-gathering and crafting you do, No Man’s Sky is similar to survival games like Rust and Don’t Starve. But basic survival isn’t too hard to manage; it’s upgrading your gear and devices that take time, and that relies on a decent amount of repetitive action.

Getting there is most of the journey

No Man’s Sky also significantly limits your travel capabilities when on a planet’s surface: You do a lot of walking. You can shorten travel between points on a planet with your ship, but you still have to get in and drive – there’s no way to fast travel between locations, even after you unlock checkpoints that serve as respawn locations. 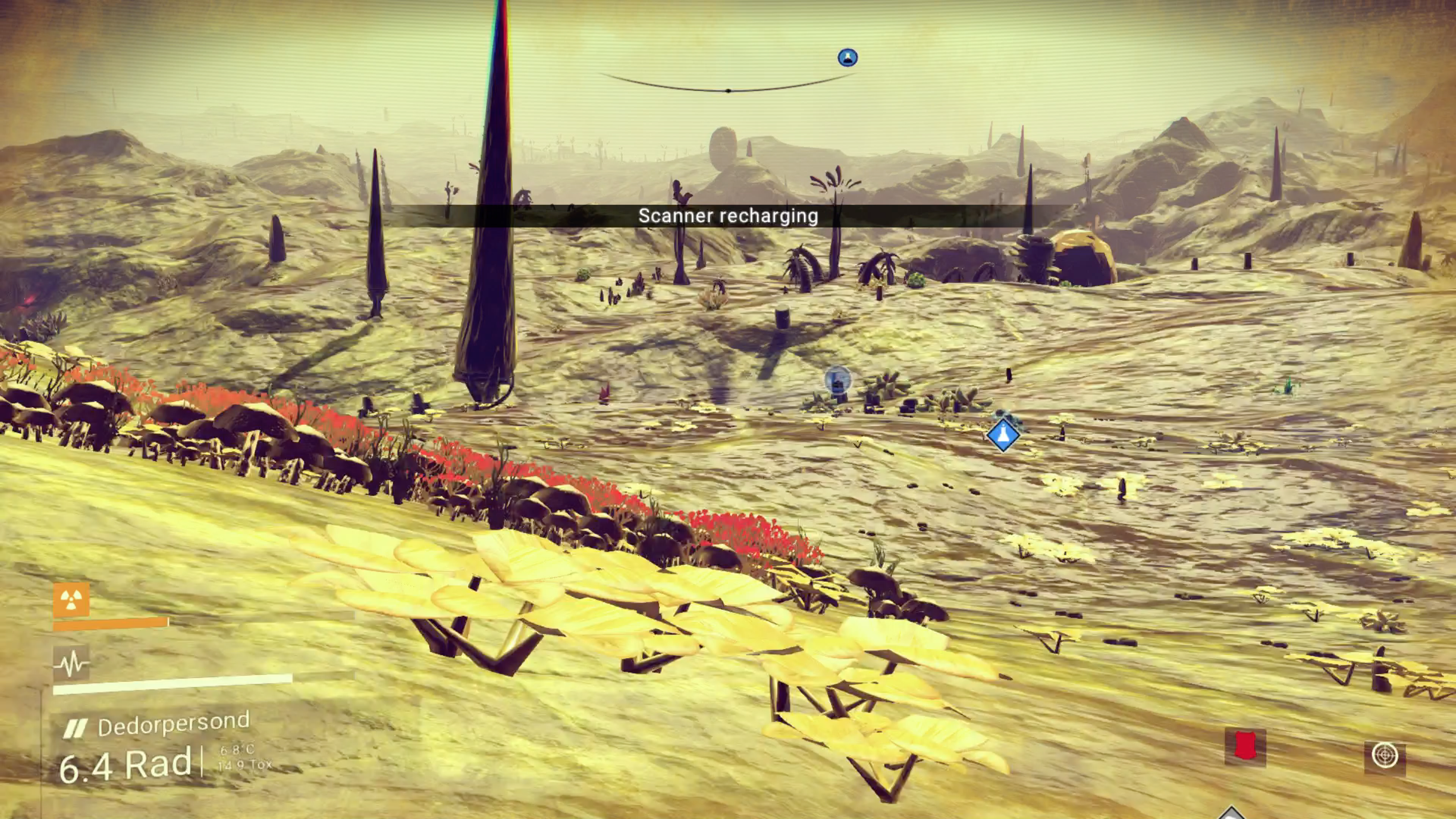 Basically, No Man’s Sky involves a lot of work – and it’s lonely work, too. This is that rare thing in today’s console gaming world: A purely single-player experience. You can’t fly the endless skies with your pals, but there is an online component because players upload their discoveries to the No Man’s Sky servers to track their exploration That means there’s a (slim) chance you could find a planet among the quadrillions that someone else has already discovered previously.

Generally speaking though, it’s you, computer-controlled NPC aliens, and your ship. And that’s what makes this game so great – it’s almost more of an exercise in guided, solitary meditation than it is a video game.

No Man’s Sky’s loneliness is where this title is likely to divide players. For me, it’s a welcome reprieve from the frenzy and chaos of multiplayer shooters, including yes, even the vaunted Overwatch. And even though it’s a wildly different type of game in almost every way, No Man’s Sky is a kind of anti-Pokémon Go, providing a way for a solitary player to focus inward and satiate their curiosity without any kind of social pressure or acknowledgement that they’re playing a game. If Pokémon Go encourages players to ‘get out and play,’ No Man’s Sky encourages players to ‘retreat within and contemplate.’ 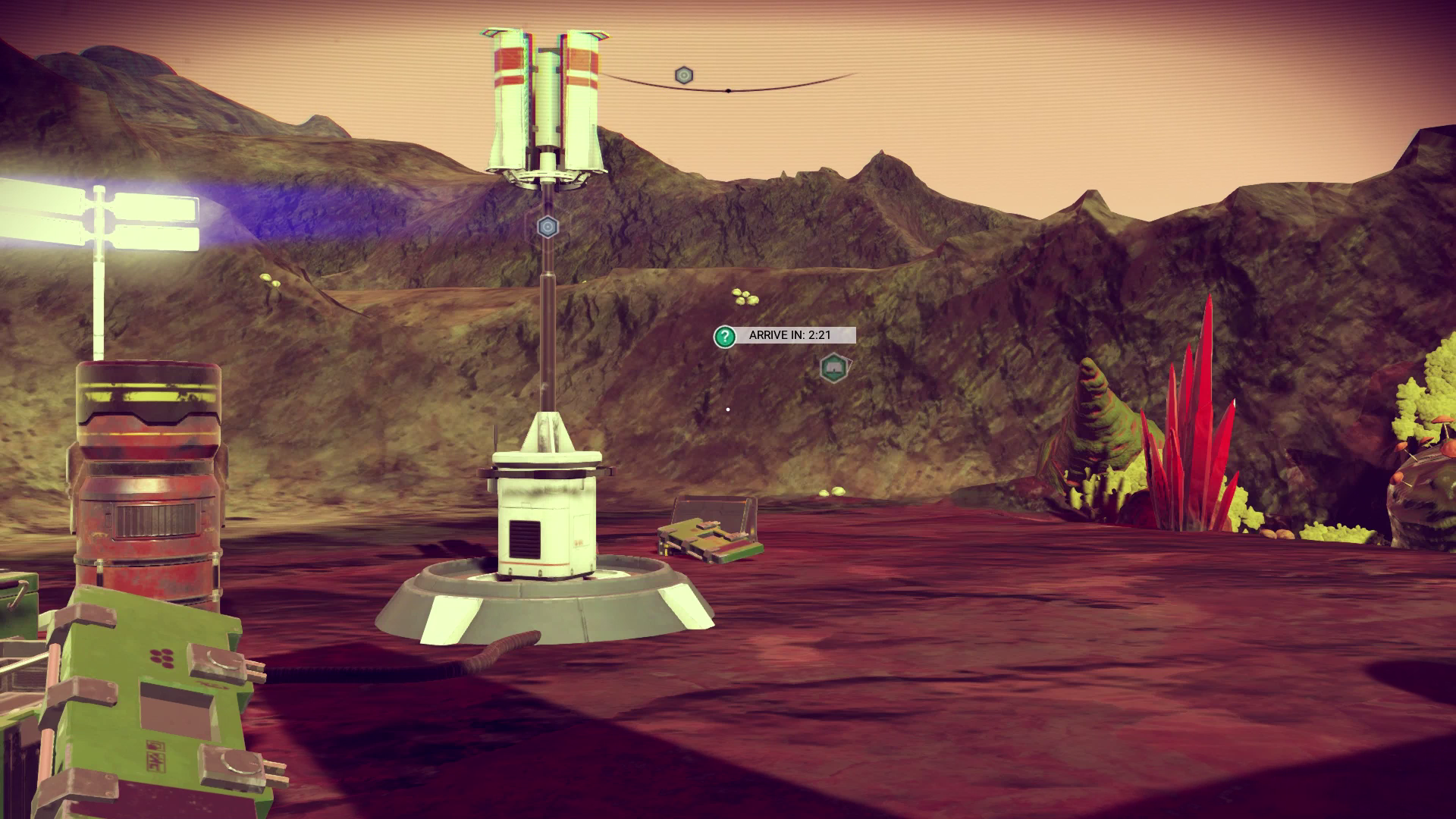 Despite the lack of online synchronous multiplayer, No Man’s Sky also doesn’t have a storyline, which is generally a key feature of single-player titles. But it also doesn’t need one – a story in a universe this ripe for exploration would feel tacked on at best.

It makes sense that a game where you spend most of the time wandering the surface of planets as the only bipedal humanoid being around would seem lonely, but No Man’s Sky makes this a virtue thanks to rich environments and color schemes that benefit because they don’t strive for false realism. The music is soothing and atmospheric, an ambience that brings the isolation to a place where it feels comfortable.

Know what you’re getting into

In the end, this is a game that a few players, including myself, will love intensely and sink many, many hours into. You might fall into this camp if you spent a lot of time playing Skyrim while ignoring or after completing the main quest line. Or if you were a fan of the Escape Velocity series, and cared little about the plot. Non-gamers might also find something to love here, as a way into interactive media that diverges so stridently from other ‘games’ with more conventional mechanics.

I haven’t played enough of No Man’s Sky to know for sure how long it’ll keep my attention, but I love what I’ve done so far, and I look forward to being able to continue feeling like a mite lost in a desert where every grain of sand has something unique and exciting to offer.