Kids, let’s nerd out for a minute and look at the names in the ending credits of Stranger Things. If you’re like me, you’ve been watching the Netflix original series and obsessively talking about it with literally everyone you know. I’m not going to spoil the show, but there are a few things that stood out for me and I wanted to share them all with you.

Let’s start with the awesome opening title design. With a red neon-like design and an amazing retro font, creative studio Imaginary Forces is introducing the show with a strong show identity. The company is also the studio behind the opening title for Jessica Jones and many, many other shows. Chances are you’ve seen quite a few of their designs.

The subtle animation with imbricating letters as well as the black background is a modest opening full of mystery. You don’t really know what to expect, and yet, you’re able to say in a fraction of a second that you’re watching the opening title of Stranger Things.

And of course, it’s hard not to think about the Lucasfilm neon logo that we’ve all seen at the beginning of Star Wars movies. While Star Wars is a timeless movie franchise, the first three movies were released between 1977 and 1983. By referencing the Lucasfilm logo, Imaginary Forces is instantly projecting us back to the 1980s.

What about the font? The Telegraph interviewed Ed Benguiat, the 88-year old typographer who created ITC Benguiat back 1977. It’s an iconic font that you may have seen on the covers of the “Choose Your Own Adventure” books. Benguiat doesn’t have anything to do with Stranger Things, but it says a lot about his wide reach. He has created some of the most iconic fonts of the 20th century as well as some long-lasting logos — Ford, The New York Times or Estée Lauder logos were all created by him.

Imaginary Forces settled on this font after the Duffer Brothers handed out 15 book covers as an inspiration — most of them were Stephen King novels, who also happens to be a big inspiration for the show. Back in the 1980s, cover designers used ITC Benguiat to write Stephen King’s name on many book covers at the time.

Let’s switch to the soundtrack for a minute. If you go on Netflix’s Spotify profile, the Stranger Things playlist is by far the most popular. With 108,000 subscribers at the time of this article, it’s clear that many people want to hear The Clash, Joy Division or New Order more often.

But I’ve been more intrigued by the original soundtrack, including the track in the opening title. Kyle Dixon and Michael Stein have been in charge of this retro-leaning synth soundtrack. The two artists are part of the Austin-based band S U R V I V E and set the right mood for the most tensed scenes. I can’t wait for their new album this fall.

Finally, the artwork of the show is like a time travel machine to the 1980s. It’s hard to believe that Drew Struzan didn’t draw it himself. Struzan designed the artworks for Star Wars, Blade Runner, Back to the Future, E.T., Indiana Jones and many other popular movies.

Kyle Lambert created the artwork for Stranger Things, mixing together Struzan’s style with a sort of comic book vibe for the character design. Lambert also designed the iconic Super 8 artwork. Interestingly, Lambert started drawing this artwork on his iPad Pro using Procreate and an Apple Pencil. He later exported the artwork to Photoshop. 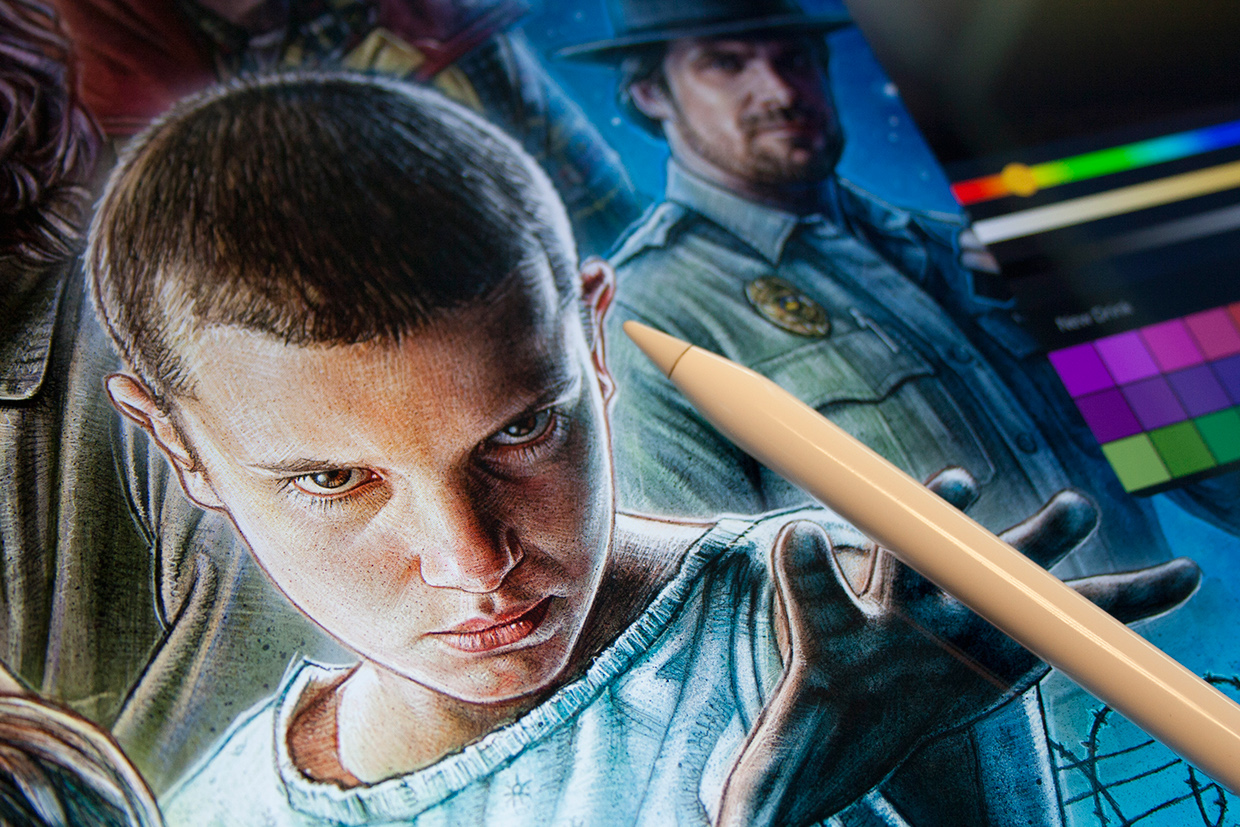 You can’t make a show like Stranger Things without a big cast and crew with too many names to name — Malgosia Turzanska and Kimberly Adams-Galligan have done a great job on the costume design for example. But it’s nice to break out these little touches that make the series so special.

And if you haven’t watched Stranger Things yet, go and watch it now. 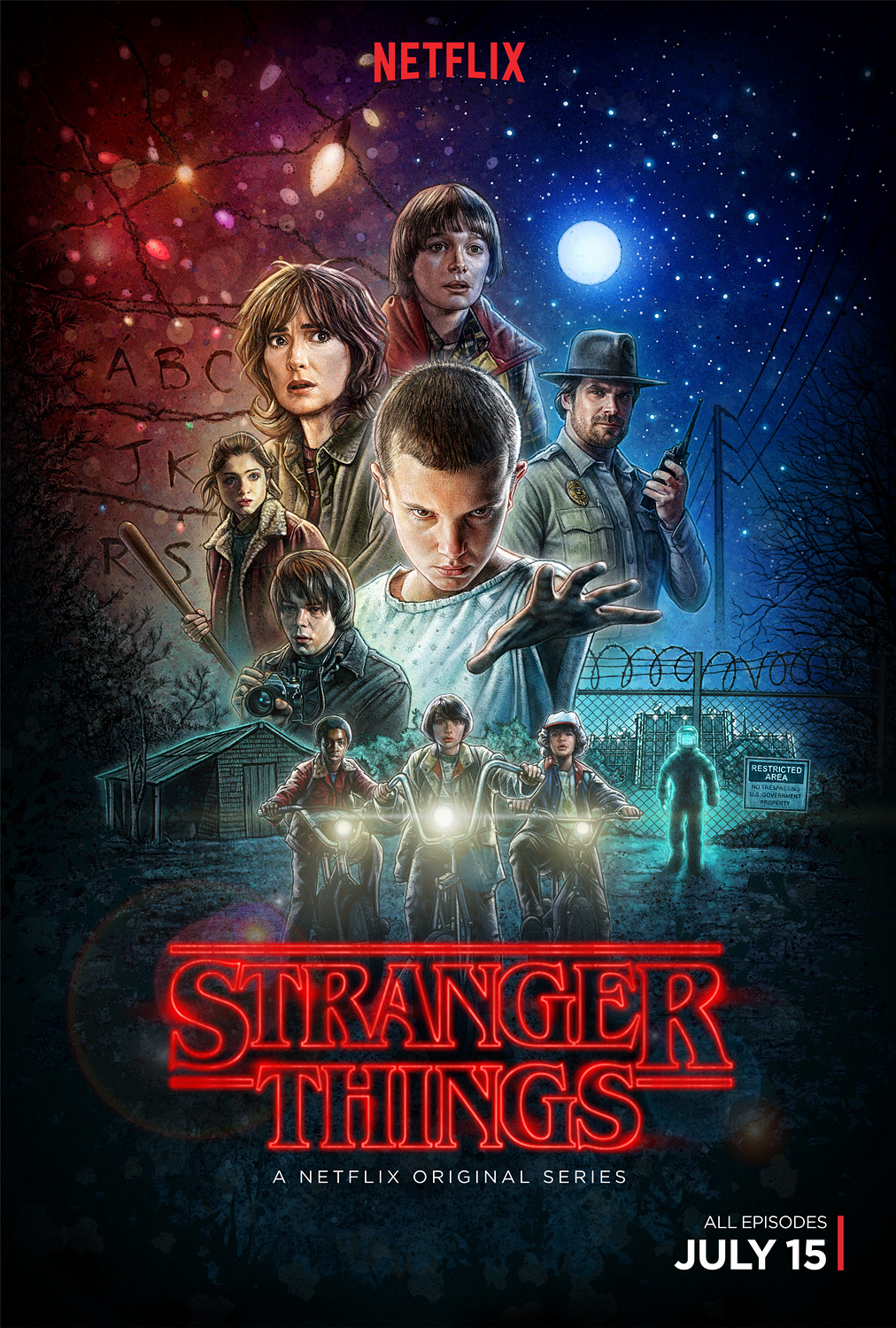