We’re about to enter an era of true drone magic.

With smarter systems, better materials and powerful cameras we’re gaining access to a world once only available to Estes rocketeers and jet pilots. Nowhere is that more clear than with the Yuneec Typhoon H, a camera platform that is also a drone that is also incredibly fun to fly.

First let’s get one thing out of the way: this thing costs $1,300. For the faint-hearted that price is surprisingly high. It includes a surprisingly powerful – if confusing – remote control and a full 360-degree 4K camera that is mounted under the drone like a sort of gimbal-powered webcam. The body is made of carbon fiber tubes, and the build is quite solid – one major crash didn’t take out much more than an LED cover on one of the six props. In short, if you’re going to get a drone this is a very strong candidate and can handily match anyone else in the space.

The first thing you notice about this monster is its size. The six arms can fold down for easy storage, but it’s a lot more fun to have this sitting around like a giant flying face-hugger waiting to unleash havoc. Once you get over the initial shock of the drone’s size you’re surprised by its simplicity. Except for a fiddly gimbal under the legs, it is about as elegant a piece of consumer electronics as I’ve seen in a long time.

This six-rotor flying machine is actually a camera platform. The webcam-like ball camera on the rotating gimbal records video in 4K UHD 30fps or 1080p 120fps. It can also take 12-megapixel photos.

Charging the battery takes a few hours and it lasts for about 15 minutes of hard flying. There are multiple warnings when you’re about to run out of juice, and the drone will lower itself toward the ground if it’s about to hit empty. You can lift the landing pads up and out of the way with the flip of a switch and you have full 360-control of the camera.

But how? With a huge, complex controller, that’s how. Color me simple but take a look at these: 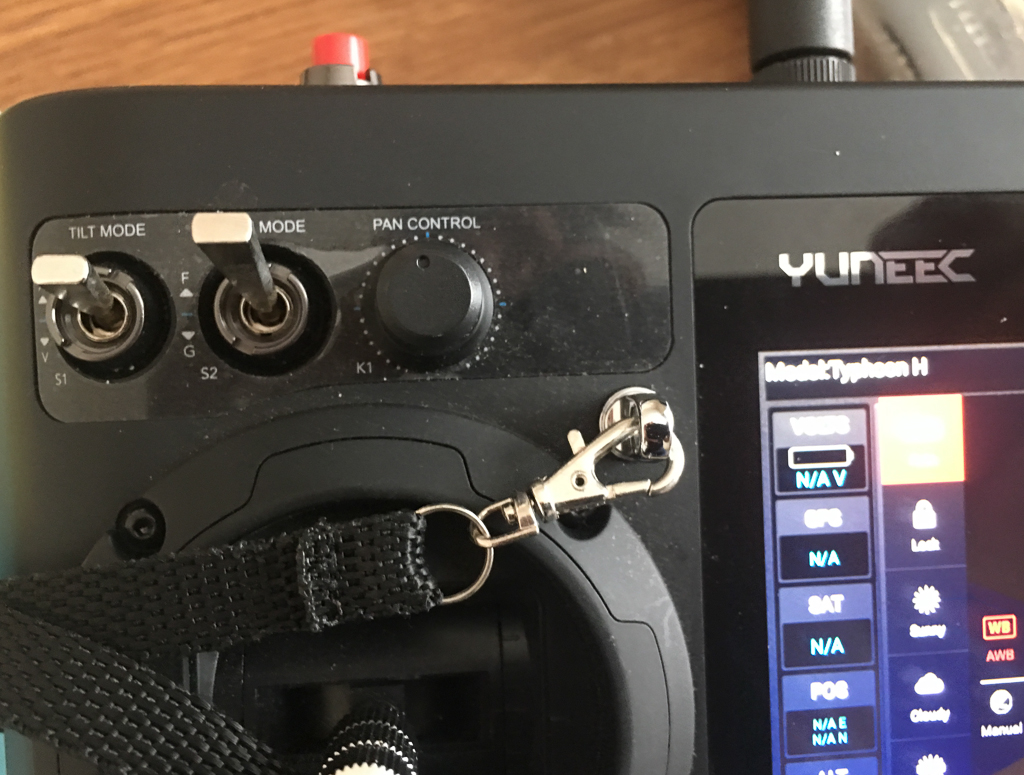 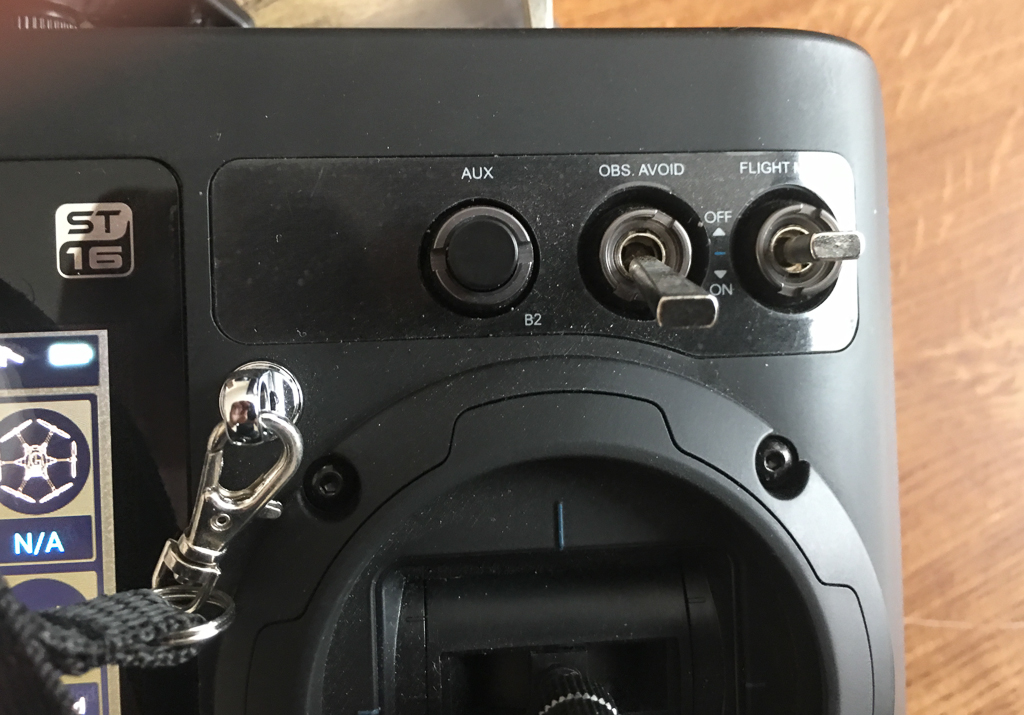 Those are some of the buttons on the very complex-looking remote control. In fact the controller is the scariest thing about this drone. It’s actually an Android tablet with built-in cooling fans, and there are more switches and knobs than a 1980s boom box. Luckily the controls aren’t very difficult to master.

After turning on the drone all you have to do is go outside, connect to the camera, and press the big red button. The drone will start up with a satisfying whirr. Then just push the left control stick up and you can soar to 400 feet in about 20 seconds. The drone can fly about a mile away from the operator, although in practice, that’s not recommended. 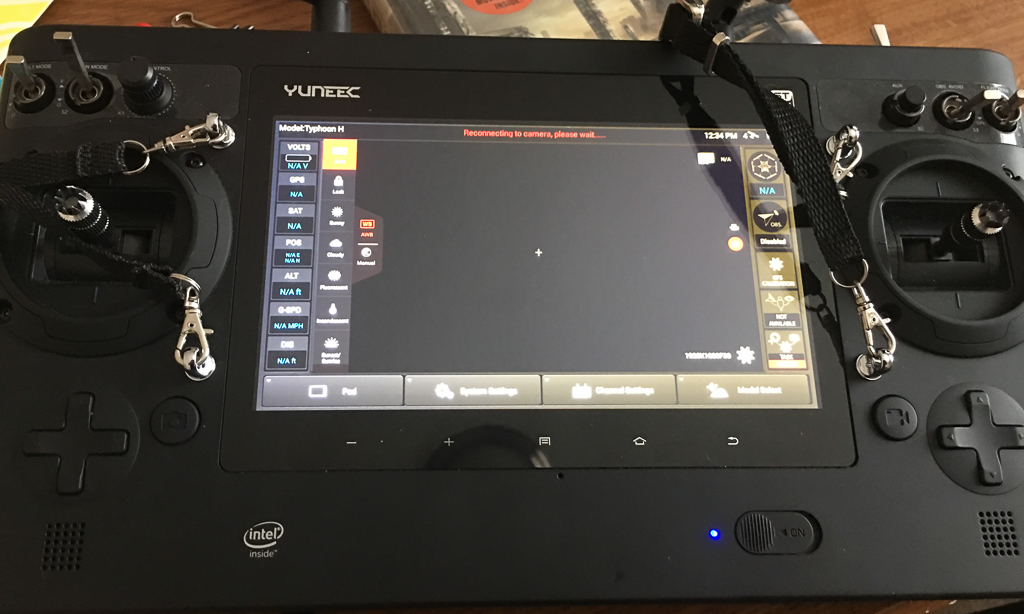 There is also a little “wizard” controller that lets you point the drone in different directions like a Wii controller, allowing for one person to control the flight pattern and another to record images and video.

The drone also has obstacle avoidance and a fairly robust landing system. When it gets too close to a tree or building, the drone will tend to move away from the obstacle. And when you bring it down it will, for the most part, slow itself down. In many cases, however, I noticed that the drone experienced a bumpy landing on almost every surface including cement. Unless you slam down the power button as quickly as possible, the thing will tip and you’ll be out a few propellers. 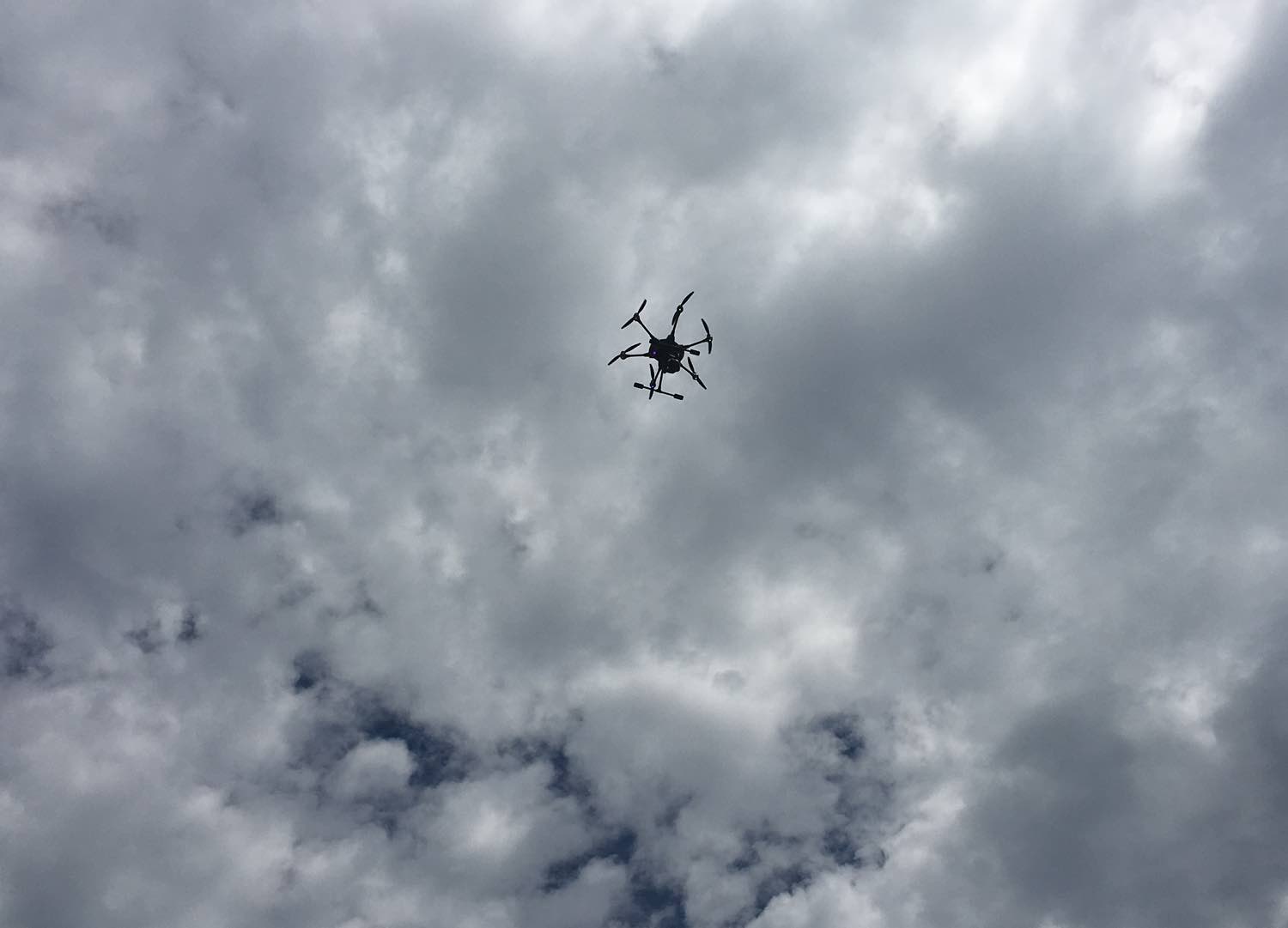 How are the images and video? Sadly I couldn’t get this thing into a place that could do the 4K video justice and an initial crash rendered the video a little shaky anyway. The crash was caused by the aforementioned “bumpy landing” where the drone touched down briefly and then quickly rose up right into a tree. This is not common behavior in the least and can be chalked up to operator error and the fact that I first flew this thing in crowded Brooklyn. Once I took it out into the wide open spaces of Ohio I found everything quite responsive.

Trust me, though: the images and video are amazing. You can see some below but in general you’re looking at a high-resolution view of your world from 400 feet up. It’s great. 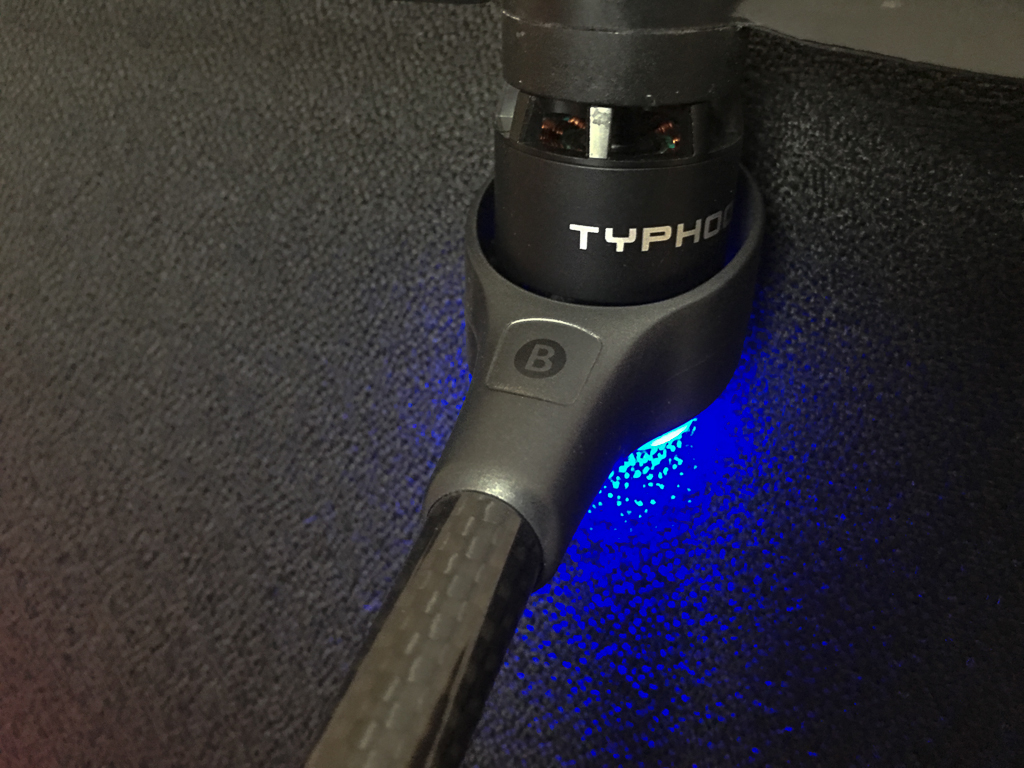 The Typhoon H is amazingly easy to fly. Getting it up into the air is as simple as pressing a button and the controls are unique if a little odd in that, when set in their default configuration, forward is always forward for the drone. In other words, if you’re facing North and push the left stick forward the drone will fly north. If you turn to face East and you press forward, the drone will fly East. It’s an odd experience.

You can also set up the drone to rotate around a target or follow a route between points of interest. This means you can set it up to fly in a Goodfellas-esque tracking follow from one place to another. It’s a bit complex to set up but it works well.

Finally, once I moved the drone out of Brooklyn I found it amazingly easy to land. An automatic landing feature calls it back to you automatically without many issues, or you can simply turn the camera down and set crosshairs on an empty spot. Then press the left stick down and down you go, slowly approaching the ground with grace and aplomb.

The Typhoon H controller looks complex at first but there’s not much to worry about when you’re taking the drone through its paces. In short, you’re basically dealing with a powerful drone with a powerful internal computer and you practically can’t crash it unless you’re reckless. 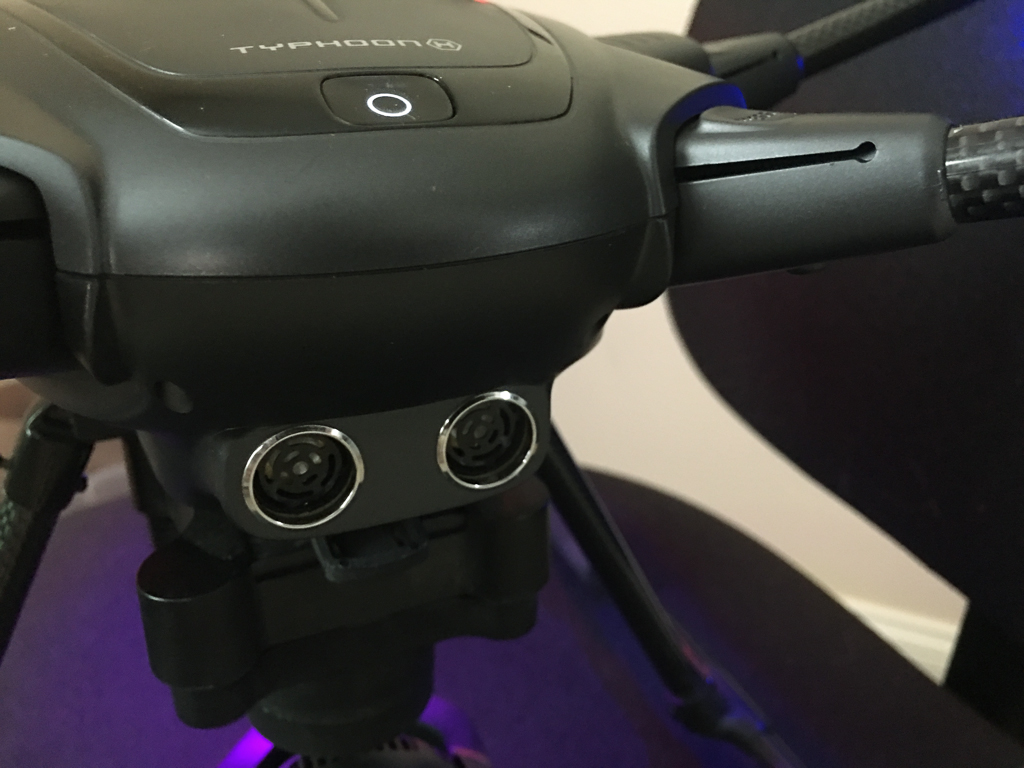 The obvious worst thing about this drone is the price. At $1,200 you could get a few Parrot drones or an old DJI. However, the features and power of this drone make it well worth a look if you’re in the market for a mobile camera platform.

I’d also worry a bit about the camera and gimbal. The entire enclosure is made of plastic and it cannot survive a direct hit with the ground unscathed. Luckily the big landing gear bears most of the weight when the drone comes down too fast but a direct hit on the camera with a tree branch or overhang can cause some major damage. It’s easy enough to replace the pieces but it’s a bit frustrating.

I’m also slightly concerned about support. Yuneec is a smaller company in California and I’d be concerned about follow-up support if your drone goes into the drink. I didn’t have trouble getting a new landing gear after a crash, though, so they’re definitely doing their best to be responsive.

Drones are magical things. They are model airplanes, flying cameras, and alien spacecraft all rolled into one. There is nothing more exhilarating than watching a drone like this one take to the air, and there is little more exciting than firing this thing up for the first time. It’s really fun.

But this drone is also a tool. In the right hands this is a flying camera station and a unique tracking system. If you’re a cinematographer you can use this to take shots you wouldn’t normally be able to get and, with Yuneec’s immersive headset, you will soon be able to watch the sky in VR video mode. It’s a prospect that should give every budding aviator chills, and it’s an exciting product coming out at an exciting time in the industry. 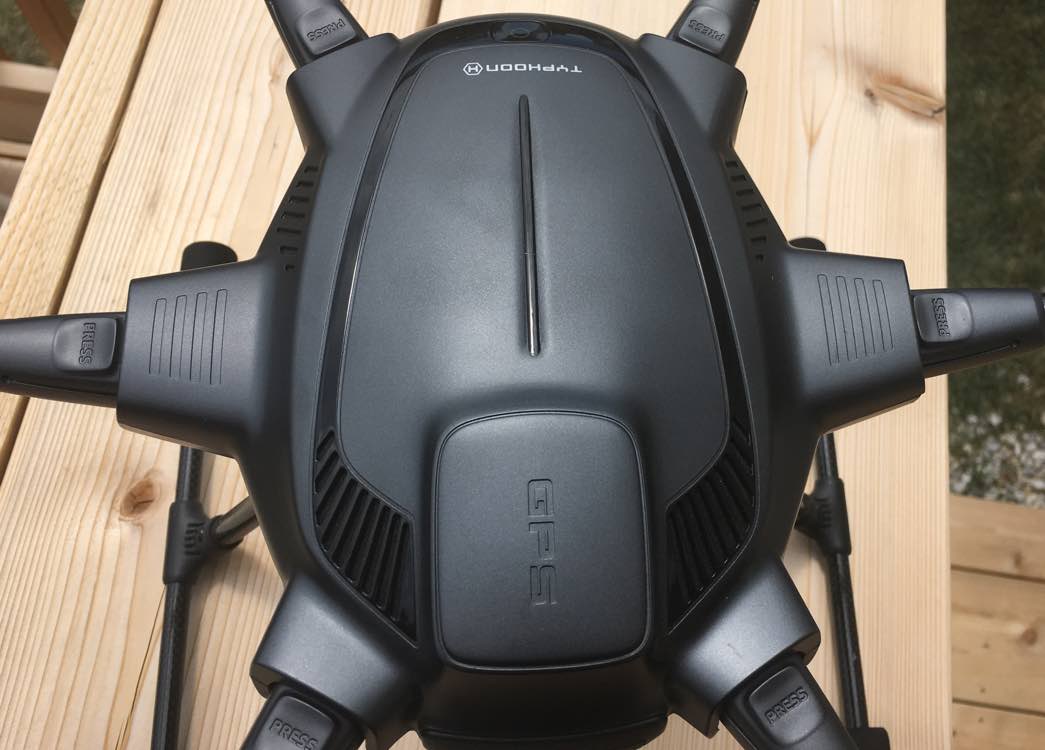