There are signs that a growing number of Brits are feeling overwhelmed by the never-ending demands of digital technology, with many web users attempting to reset the balance between their online and offline lives by taking a temporary break from connected devices.

The finding comes from U.K. telecoms watchdog Ofcom’s 13th annual Communications Market report, which offers a yearly deep-dive into the domestic digital and media consumption landscape. (You can read the full report here.)

Ofcom found that one in three UK internet users (or some 15 million people) have, in 2016, deemed there’s too much tech in their life — going on to take a so-called ‘digital detox’ to try to regain control over their devices.

A quarter of these reported spending up to a day internet free; a fifth took a week off; and 5 percent somehow managed to be web-free for up to a month. 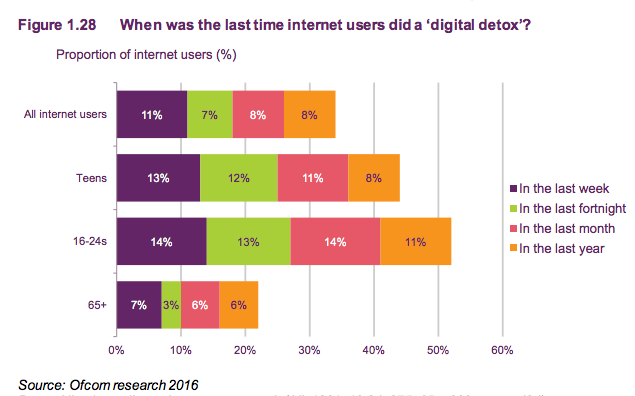 One in 10 had apparently even taken a self-enforced break from their screens in the past week alone. The figures were extrapolated from a study of 2,025 U.K. adults and 500 teenagers, conducted by Ofcom.

The watchdog also found that many internet users relished their self-enforced breaks, with a third (33 percent) reporting they felt more productive; and 27 percent describing it as “liberating,” while a quarter said they “enjoyed life more.” Not exactly a great verdict for tech.

On the negative side, 16 percent of detoxers reported experiencing FOMO during their break, 15 percent described themselves as feeling “lost” and 14 percent as “cut-off.”

The report also unearths some distinctly addict-style behavior among U.K. tech (over)users, with almost half (49 percent) reporting time spent online eating into hours originally intended for other tasks. More than a third (37 percent) said the same was true of their use of social media.

Activities being neglected because Brits are overusing the internet include housework (reported by 48 percent); sleep and rest (47 percent); and spending time with friends and family (31 percent). So technology is making Brits more messy, tired and antisocial.

One in five (22 percent) internet users also admitted to being late for a meeting with friends or family because they’d been sucked into stuff online, while 13 percent said they’d been made late for work because of their use of tech. 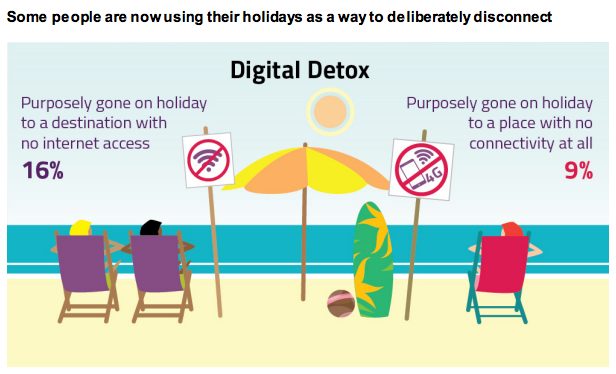 Tech’s attention-sucking ways appear even more pronounced for U.K. teens, with a quarter (26 percent) reportedly being late for school as a result of web use, and the majority (60 percent) of teenagers neglecting school work to spend time online.

Unsurprisingly, Ofcom also found many U.K. parents are limiting children’s time online, with 61 percent of teens who use a connected device reporting being digitally grounded, having their device taken away or its usage restricted. Although you can imagine teenagers fuming about hypocritical parents as a result.

For adult Internet users in the U.K., Ofcom found they’re spending an average of one day per week (25 hours) online, with 42 percent reporting they go online or check apps more than 10 times a day, and a truly addicted one in 10 (11 percent) accessing the internet more than 50 times daily.

While Brit web users are clearly very wedded to the internet, they are at least not in denial about their addiction: a majority (59 percent) of Internet users describe themselves as “hooked” on their connected device. And a third (34 percent) admitted they find it difficult to disconnect.

The Ofcom report also charts a particular rise in the use of instant messaging in the UK, which is likely to be contributing to the feeling of being overwhelmed by time-sapping tech, given the ceaseless demands of open-ended real-time messaging chats which — unlike other comms technologies — don’t have clear or natural cut-off points.

Ofcom found that the proportion of U.K. adults using services such as Facebook Messenger and the Facebook-owned WhatsApp messaging app at least once per week rose from under a third (28 per cent) back in 2014 to approaching a majority (43 per cent) in 2016 — which it flags as the biggest increase across all comms and media activities it charts in the report.

It notes that instant messaging is also considered the single most important means of communication among 16- to 24-year-olds, with 36 percent citing it as their top comms medium.

Also on an uptick in the U.K.: photo or video messaging services, such as Snapchat, which are now used by a fifth (21 percent) of U.K. adults on a weekly basis, up from 14 percent in 2014.

Other findings from the report include: 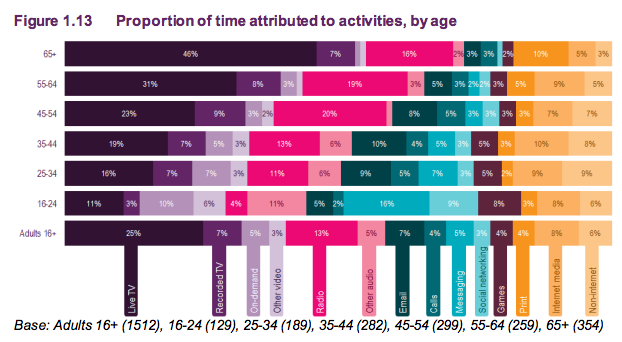