With plans for a new brewery and aggressive expansion in the biggest craft beer market in the world, Scottish brewery BrewDog* turned to BankRoll to raise investment to, er, bankroll its U.S. expansion plans, with a hefty $50 million round of equity crowdfunding.

The brewery has secured 42 acres of land in Winchester, Ohio (don’t worry, I had to look it up, too), where it is building a 100,000-square-foot brewery that is to become the epicenter of its U.S. operations, with a taproom, a restaurant, a visitor center and — of course — an industrial-sized brewery to start filling bars and bottle shops around the land.

To fund the expansion, BrewDog is launching its equity crowdfunding campaign, for the first time inviting U.S. investors to join its existing 40,000 European investors.

This isn’t the company’s first foray into tapping its drinkers for cash; since being founded in 2007, the brewery has leveraged its against-the-grain branding in every aspect of its business, including how it raises money. Over the past decade, the company has run four “Equity for Punks” crowdfunding campaigns in Europe. The most recent campaign closed in April, raising £19 million ($25.3 million) at a valuation of $400 million, among some murmurings that it might be tricky to get a return on that particular investment. 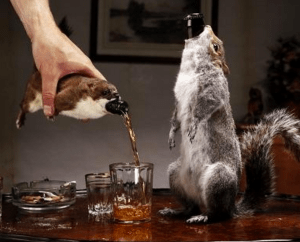 The brewery has been operating in the U.K. for a number of years, and put itself on the map with a series of nutty PR stunts, including launching “Never Mind the Anabolics,” a beer that would have gotten athletes in trouble had they drunk it; a $600 bottle of beer sporting 55 percent alcohol served inside a stuffed squirrel; and generally making a high-profile nuisance of itself whenever it steps on the toes of regulators, which, as you might have already guessed, it does often.

With great success, I hasten to add; the BrewDog brewery and its eponymous brewpubs are popular and apparently very profitable indeed, according to its own reports. It describes itself as “Europe’s largest craft brewer,” raising some eyebrows among beer lovers, wondering how big a brewery can get before they’re no longer creating craft beer.

Taking on the U.S. crowd-equity world

Beer is fun, and BrewDog’s IBU-laden beers are sure to mesh nicely with the IPA-loving American market — but what’s really interesting to me is the mechanism for raising money. There is no shortage of investors in the food and drinks market (and there have been some huge acquisitions in this space recently) — so turning to the crowd for equity investing is a strong move; it is certainly injecting some of the spirit we’ve been seeing in European crowd-equity investing into the more tightly regulated (and, frankly, more uptight) U.S. market.

I hope for BrewDog’s sake, however, that it’s able to stay on the right side of the (far more stringent) investment laws in the U.S. Brewing another 0.5 percent alcohol “Nanny State” beer to “apologize” for the 32 percent alcohol Tactical Nuclear Penguin beer isn’t going to cut it as an apology on this side of the pond.

In any case, the company’s pitch for cash is below, and if you’re a sophisticated investor interested in this space, this would be a good place to start your research.

* Disclaimer: I participated in an early equity crowdfunding round, making me a shareholder in BrewDog.