Many executives and employees have need for a role that’s basically a “chief of staff” — someone who keeps track of all the details about everyone they encounter and are headed off to meet in their professional careers. But there’s plenty of information that they might be missing out on, and as you head downstream to smaller companies those roles are just as important but missing. And all that data is basically already out there on the Web in some fashion, if you know the right places to look.

And that’s basically Accompany in a nutshell. After working on Accompany since its launch in 2013, CEO Amy Chang and her team are finally ready to pull the trigger on releasing its relationship management tool into the wild. Accompany finally today launches in an open beta today.

Accompany picks up the information from a user’s email, contacts, social, professional feeds, and calendars in order to build a comprehensive database of all the relevant information to all the people most who are most important to a person’s professional social graph. Think of it as a complete download of everything you know about a person, from public sources to notes you’ve left yourself, delivered to you directly right before you’re ready to get in touch with them.

And when I say a complete download, that’s not a huge understatement. For example, when taking a meeting with someone at a publicly-traded company, you might see the company’s most recent stock price and earnings information, people you know there, board members, nitty gritty about the company and everything in the news related to them. You’ll see some of their social interactions — like activity on Twitter — but it’ll be distilled down from the raw feeds they have to find the most important information.

When meeting someone for the first time, or the first time in a while, having that idle small chat to built rapport is absolutely critical. That’s why having all the relevant information about a person heading into contacting them or taking a meeting is important. That’s also especially true when it comes to business-related meetings where either side is trying to close a transaction. And with all that new information about your contacts coming it, it can help figure out the right moment to reach out and get in touch with someone.

“If one of your friends just announced his product and you’re super excited, and you’re the first to say congratulations I’m so happy for you, that leaves a mark,” Chang said. “There’s a warm fuzzy feeling. That’s a big deal. Kind of want to reach out, you shouldn’t awkwardly out of the blue be like ‘hey do you want to have lunch.’ You can use that as an entry, it takes out that anxiety out. It’s like entering a room of 500 people, you feel anxious walking in, you want to feel prepared.” 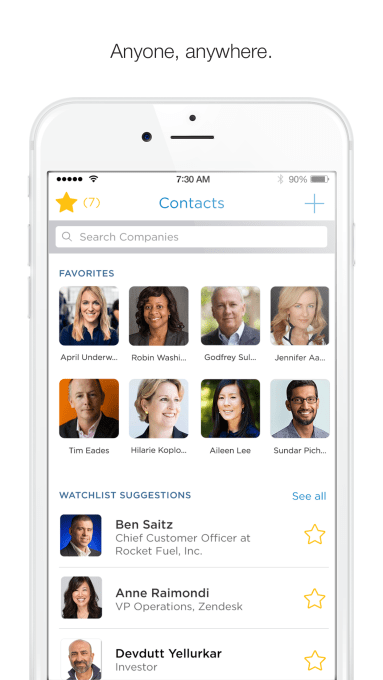 There’s an underlying theme to all the work Accompany has done over the past three years of its development. Yes, you read that right: three years. That’s because the problem that Accompany is facing is one of making sense of an immense inbound amount of unstructured data. I’ve experienced this first-hand when poking around in the internals of SEC filings when looking to pull out relevant data for stories about company earnings reports. Accompany also has to constantly add new signals in order to keep up with emerging enterprise tools.

“Some data are more dirty, some are much more user generated, others are official sources like government sources that have been verified,” Chang said. “Depending on the quality of that data and how structured it is we determine how to treat it, and we have to automate that.”

But it’s something that nonetheless is kind of a microcosm of the challenges that Accompany faced when sourcing all the data it does for its pre-meeting briefings. The core problem here is giving not just a complete download, but the right complete download ahead of a meeting or a continuing conversation. If you’re running into a product manager at Amazon, you probably want to know how the company is doing. If it had a crappy earnings report, you might want to tread carefully, and vice versa. You’ll see when the next company earnings call is, in order to keep tabs on what’s going on ahead of a meeting.

“We’ve been testing these signals, sometimes we go aggressive in terms of the number of signals we use, then respond to users by backing it off, then push it more aggressively, then back it off again,” Chang said. “We’re constantly tuning it.”

That’s just part of the whole experience, too. After all, it’s not like you’d want such a powerful set of algorithms to go toward just pre-meeting briefings. Accompany includes a whole additional daily experience that’s geared toward understanding the most recent behavior of the people that are “closest” to you — that is, people that essentially sit on the closest nodes to your professional social graph. That, too, isn’t an easy problem. It requires making sense of all the signals, like recency and prevalence in news, to figure out where to stick those faces and in what order on your feed.

To say this is a tool that I would be using constantly is an understatement. As a reporter, you are meeting tons of people throughout the course of the day. It can be hard to keep track of everything simultaneously — you want to understand every person’s place in the universe to get all the context relevant to the stories that you’re looking to put together. It’s easy to see the capabilities of something like that expanding to most, if not all, industries.

Accompany isn’t lacking interest in the venture community, either. The company has raised $20.6 million in funding from ICONIQ Capital, CRV and Cowboy Ventures. In 2014, the company raised its last $15 million financing — and despite still being largely under wraps with a small user base, it’s been able to continue working.

There’s plenty of competition coming up for Accompany. This is basically a big point when it comes to customer relationship management software. You can find some similar tools in plugins for things like Gmail. You can also see flashes of interest in an automatic digital assistant, in the form of startups like Clara — which is starting off with a natural language approach to scheduling, but have a natural path to other things like relationship management as they collect more data. There’s a chance that Accompany, spending so long in development, may have missed the boat — and it’s going to depend on the strength of its algorithms to justify its existence.

And there’s plenty more work to do. Chang wants to constantly add new elements, like authored works. That’s the point of bringing it to the world in a beta in order to figure out how people at a much broader scale than its core alpha users have been using it. And we’ll see if there really is room for a full-suite digital “chief of staff” that works well enough to start making the process of meeting and talking to professional contacts more seamless.