Carousell, a four-year-old startup from Singapore behind a listings app that enables peer-to-peer selling in Southeast Asia, has closed a $35 million Series B round to grow its reach into new countries and increase product development.

The company is seen as one of the darlings of Singapore’s nascent startup ecosystem, given that founding trio Lucas Ngoo, Marcus Tan and Siu Rui Quek all graduated NUS (National University of Singapore) while in their early twenties having spent some time in ‘regular’ jobs. Added to that, this is certainly one of the more notable (largest) Series B rounds for a startup out of Singapore.

The financing was led by existing investor Rakuten Ventures, with participation from returning backers Sequoia (via its India fund which is used for Southeast Asia deals), Golden Gate Ventures and 500 Startups. The startup previously raised a $6 million Series A round in 2014, and an $800,000 seed round in 2013, so a new round was seemingly on the cards before too long.

Indeed, TechCrunch last December reported that Carousell was trying to raise as much as $50 million from investors for this round. The company declined to comment then and, this time around, all Quek (CEO) would say of that report is that Carousell is “super grateful and happy that we have the support of our existing investors.”

The app started out in Singapore as “a passion project to solve our own problems,” Quek said in an interview with TechCrunch. The simplest way to describe Carousell is a Craiglists for mobile via its iOS and Android apps. It uses a chat-style interface with photo uploading options to connect consumers who are interesting in buying-selling items together. The onus is on the individuals to arrange the sale and payment, since, right now, Carousell does not make money from its service. 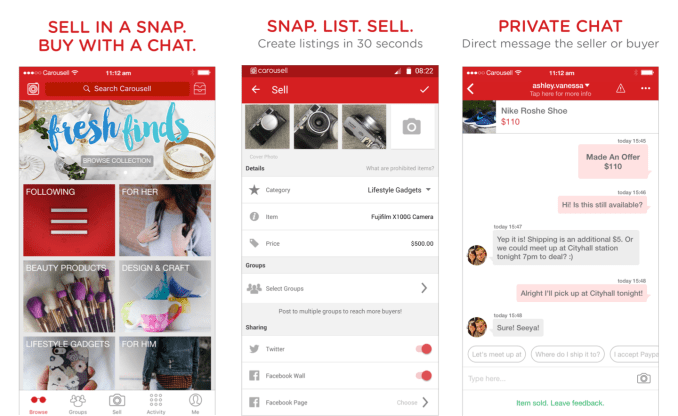 The company claims to have 35 million listings on its service with 70 new listings added per minute and active users spending 17 minutes inside its app on average. (Not bad, Facebook recently revealed its users spend an average of 50 minutes a day across its core app, Instagram and Messenger, and that’s three apps.)

Today, Carousell spans five countries — Singapore, Hong Kong, Taiwan, Malaysia and Indonesia — with plans to increase that footprint further. That may also include a foray outside of its existing focus on Southeast Asia, Quek said.

“The problem we are solving is a truly global one,” he explained. “So we’re not bound by any region per se. Other markets [that we expand to] will be outside of Southeast Asia, but we’re doing work to finalize those.”

The company nabbed JJ Chai, who was running Airbnb’s business in Southeast Asia, earlier this year to manage its international expansion plans.

There’s plenty of competition for e-commerce dollars in Southeast Asia, a market where online is estimated to account for less than three percent of all commerce. Aside from Lazada, which took a $1 billion investment from Alibaba this year, there are country-specific players like SoftBank-backed Tokopedia and Matahari Mall, run by retail conglomerate Lippo, in Indonesia, while informal commerce on social networks has grown to the point that even Facebook has dived in. The U.S. giant is testing a social payment system that, alongside a new Facebook Shop feature, encourages users in Southeast Asia to buy and sell items without leaving Facebook’s walls.

“We did not know about the launch of Rakuma,” Quek previously told me. “Rakuten is an investor through their venture capital arm. Rakuten Ventures’ investment in Carousell is non-strategic in nature. We operate independently and are not aware of their strategic plans.”

Tough competition indeed, so perhaps it isn’t surprising that Carousell isn’t thinking about money too much right now. Quek said that the company (and its investors) are focused on scaling its app and that, while open to monetization potential in the future, there’s no immediate plan to do at this point.

He did however emphasize that he is bullish that, once the time comes, Carousell won’t have problems bringing in cash.

“The Carousell business model is essentially the classifieds model, which traditionally has [around] 50 percent margins,” he said. “We’re not reinventing the business model just reimagining the experience. We will eventually bring in monetization.”

“Our immediate focus is on channeling all our energy to expanding internationally and making sure we have a strong product and engineering team,” he added.

On that last note, Carousell currently has over 90 staff of whom around 24 are engineers. Quek said he hopes to double that engineering headcount by the end of this year. The big focuses for that team, he said, included improved search and buyer-selling matching, and a reduction in spam listings.

As for an eventual exit strategy, such as Southeast Asia’s first notable startup IPO? You guessed it, no comment on that for now.

“We haven’t really discussed exit options, the focus is always on making the largest impact,” Quek told TechCrunch. “We’re just getting started, international expansion will be one of our top most focuses.”