The impacts of the U.K.’s Brexit vote to leave the European Union will undoubtedly be playing out for years and years to come. But here’s one short-term effect: the HTC Vive VR headset is now £70 more expensive — rising from its original pricing of £689 to £759 (+ P&P) from today.

In a blog post HTC blames the price hike (it calls it an “adjustment”) on “recent currency valuation changes and the current value of the GBP” — a.k.a. Brexit, which triggered a massive fall in the value of the pound (which remains very far off a recovery on that front). 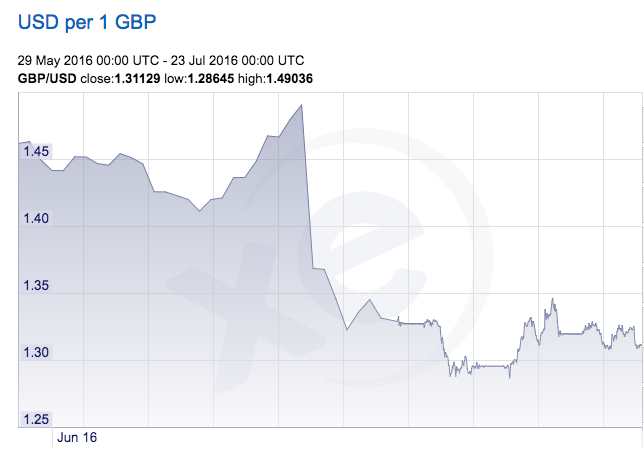 The Vive price hike is perhaps good news for the rival Oculus Rift VR headset, which is priced at £499 in the U.K. — at least until the Facebook-owned company decides it also needs to reconfigure pricing, post-Brexit. (As Engadget notes, phone maker OnePlus increased the price of one of its smartphones in the UK last month, also blaming currency fluctuations.)

It’s also worth noting that Vive rival Rift’s price-tag is just for a VR headset; Oculus’ delayed Touch controllers are due later this year, and will cost extra (how much more is not yet clear). Whereas the Vive is an all-in price — you just need to already own a powerful enough PC to drive the thing. And now, from today, be willing to stump up even more cash to dive into virtual reality.