Zoosk, the online dating company with 38 million members, is today launching a new application called Lively, aimed at a younger demographic. The app is meant to be Zoosk’s answer to Tinder’s success, but it moves beyond the “hot or not” swiping mechanism Tinder popularized in favor of something more original: stitched together photo and video collages that tell the stories of its users’ lives.

The app is the first to emerge from Zoosk’s in-house incubator, Zoosk Labs, where the company has been experimenting with ideas that could expand its core business.

According to Zoosk’s Vice President of Product Management Behzad Behrouzi, Lively is not intended to eventually replace Zoosk, but will rather live as a standalone offering.

“We continue to experience an increase in demand for digital dating services and have reached the point where we are able to build and take a product to market that is focused on more specific demographics or dating approaches,” Behrouzi says of why Zoosk wanted to build a new app.

The real reason for Zoosk’s expansion, however, is that it’s being killed by Tinder. The company laid off a third of its staff earlier this year, which followed other layoffs the year prior, as well as the exit of its founders and a ditched IPO.

However, the company claims it has been EBITDA profitable for the past six quarters, and has just seen its second consecutive quarter of revenue growth. Still, it has had to achieve these numbers the hard way – it needs a new and popular app to remain competitive.

What makes Lively different from not only Zoosk, but also other dating apps on the market today, is the way it uses media to enhance users’ profiles.

The app automatically compresses the photos and videos users upload, then turns them into moving “story” collages, which feature transitions and movement.

These stories are meant to better show off someone’s personality, lifestyle and interests, without requiring that potential dates swipe through a dozen some photos to get a sense of the person in question. Their animated look-and-feel give the app its name. 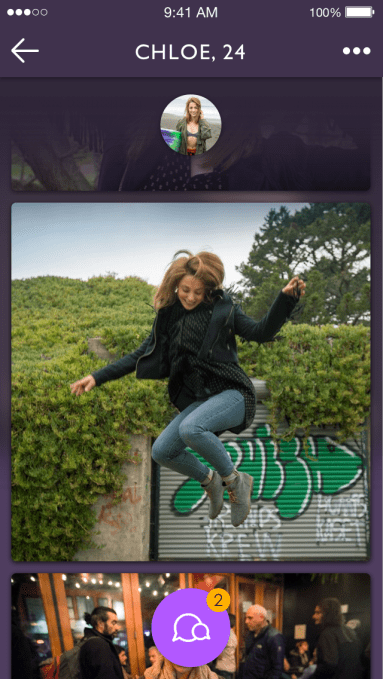 The company also notes that, in a user survey of those ages 18 to 34, the overwhelming majority (90%) said that they were more likely to reach out to someone with more pictures or videos on their profile. And nearly three-quarters of women and over half of men said they found that traditional social media profiles are more informative about a person than their dating profile.

Lively attempts to mimic a more social experience with this “stories” feature. Users can upload new stories at any time, giving profiles a more dynamic feel.

Behrouzi says that these stories can help create chemistry online.

“Experiences replace selfies and moving stories replace text as the focal point of member profiles. Lively helps capture those intangible moments and aspects of someone’s character that draw people together. How they hold a drink, laugh at a joke, or move through a room,” he explains. 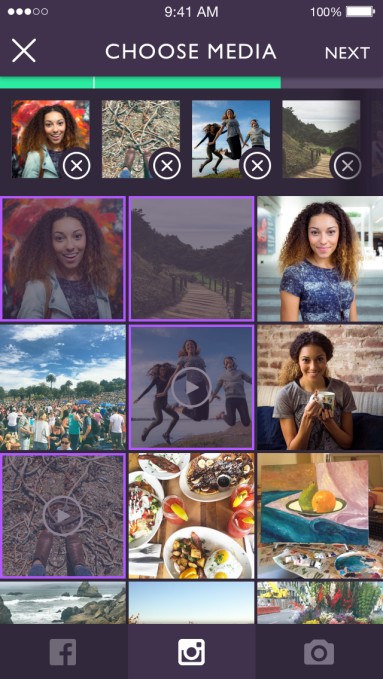 To use Lively, people sign up using Facebook, then pick photos and videos from their social media profiles (including also Instagram), or their phone’s Camera Roll.

While these stories can make for more interesting, engaging collages when complete, the problem with tapping into videos is that people are often recording what they’re doing, not themselves. That means your story might show that you’ve just seen a great band, for example, but it might not include any footage of you.

However, Lively will include rotating prompts that suggest new story ideas to daters which will help remind them to keep their profile up-to-date with more current content. By adding new stories, they’ll also be able to “boost” their visibility on the app. 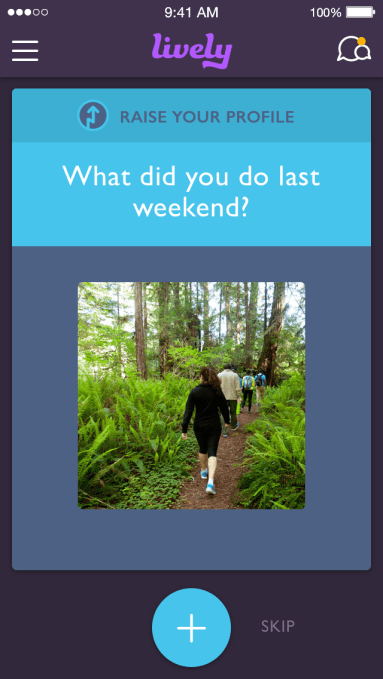 After viewing someone’s story, you can click a heart button to like them. If the match is mutual, you’re alerted, similar to other dating apps. Matched users can then chat via an in-app messaging system.

While Zoosk’s older flagship application is much like Match.com as it requires a subscription in order to actually communicate with other users, Lively will be a free application – at least for the time being. Behrouzi says that the app was designed with monetization opportunities in mind, but declined to provide details.

Lively is “launching” in San Francisco as that’s where the initial user base will be located. However, the app is available nationally on the iTunes App Store. While it won’t prevent sign-ups from those outside the city, there may not be as many users in other markets.

The only requirement for using the app is a Facebook profile, which is how the app checks to see if its users are 18 or older.

The new app isn’t very difficult to use, but its focus on stories comes at the expense of more detailed profiles, I found. Instead of allowing users to write out longer posts to describe themselves, it only asks a few basic questions: height, occupation, ethnicity, religion and an “about me” section – all of which are optional, or pulled in from Facebook.

That said, the app is more visually stimulating than competitors like Tinder, Bumble, Match, OKC, POF, and others, given the way it incorporates these image-and-video collages. But navigating its user interface is not as simple as Tinder, either, which could be a challenge as it gets off the ground.