Finally there’s a better way to gain followers on Snapchat. The app refuses to tell you who to watch. There are no suggested user lists, no leaderboards, no little buttons everywhere begging you to add someone new. You’ve had to go out and find your own people to follow.

Alongside the recent launch of Memories, Snapchat quietly added a new feature it didn’t tell anyone about: The option to suggest that a friend follow someone. After we asked, Snapchat confirmed that account sending is new.

Since the launch of Stories in 2013, average users and aspiring social media stars alike have tried to build big followings. I asked “Who will be the first Snapchat Stories celebrity?” We didn’t have to wait long. From musicians, models, and athletes to Vine and YouTube personalities, people have managed to build their Snap viewerships into the millions.

That’s despite Snapchat being slow to help. It took a year and a half to launch its scannable QR Snapcodes in January 2015, and another year to add traditional profile links.

But it’s still abstained from any top-down guidance of who to follow, like the algorithmic suggestions seen on Facebook and Twitter. Third-party sites like Snapchatters cropped up, and people even resorted to printing their QR code on t-shirts. Now there’s an official way to get found. 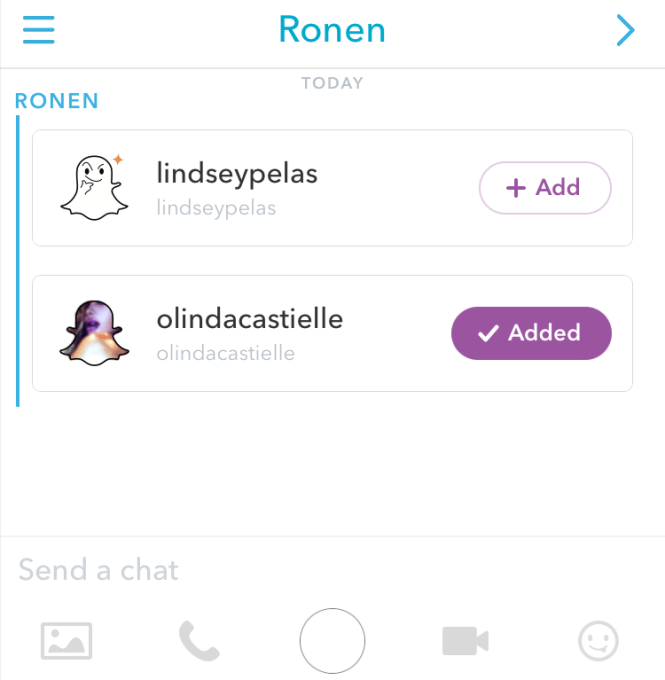 If you go into the Stories list, then tap and hold on someone’s name, a new option appears. Tap the blue arrow on the right, and you can send the account to other people. They’ll receive it as a private Chat message. From there, the recipient can see the suggested account’s name, handle, profile GIF, and a button to Add them.

This new button might become a hit with Snapchat celebs, who could ask that their followers suggest them to friends.

Doing something similar before was way too hard. You’d have to find someone’s exact Snapchat handle and type it out to a friend, who’d then have to memorize it and go to the buried Add Friend interface to type it in. Otherwise, stars would have to take a photo of their Snapcode, ask followers to screenshot it, send it to friends, and then have them use the little known Add By Snapcode In Camera Roll feature. 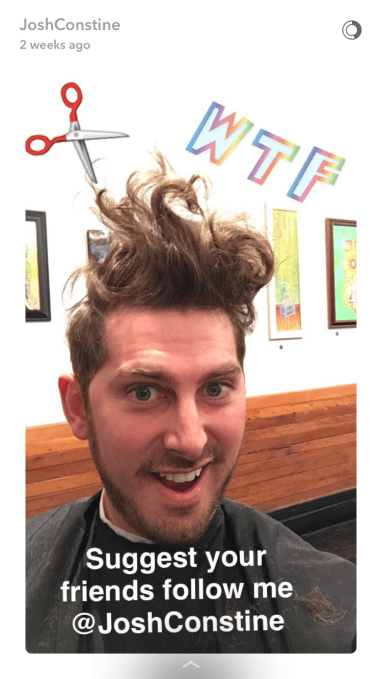 Memories is Snapchat’s attempt to eat the camera roll. But building a place to inside the app to save your snaps had many other repercussions we’re still wrapping our heads around.

You can share old content to your Stories for the first time. Once you have Memories, just tap and hold on anything from your camera roll, and you can edit and post it to your Story.

In a way, that breaks the fundamental authenticity of Snapchat. Previously, you could only share what you were currently doing. No throw back thursdays or perfectly touched-up selfies.

What this feature also unlocks, though, is the ability to screenshot someone else’s Story, then share it to yours. Before you could only send stored content to one person at a time via chat. Now you can broadcast it. So if you follow someone hilarious or insightful, you can easily encourage your own followers to add them.

Some worry the ability to share Snap-recaps could kill what differentiates the app from Instagram and Facebook. At least Snapchat surrounds old content with a white border and timestamp to make it clear these are second-class snaps.

That seems to have appeased many teens. When I asked my 5,000 daily snap viewers, they surprisingly said they didn’t mind Memories in Stories. But as Memories rolls out globally, we’ll see if it truly does get people to share richer stories that span more than the last 24 hours, or it’s abused by lazy users rehashing stale content.

At least now, you’ll have another way to discover the best Snappers in case you’re bored of your current squad.