When you’re on a roll, why not make crowd-pleasing decisions. Nintendo, which has seen its market cap soar thanks to the Pokemon Go phenomenon, just announced that it will relaunch its iconic NES console.

The NES Classic Edition will go on sale from November 11 priced at $59.99. There is a notable change however, the NES will come with 30 games pre-installed, including classics like Super Mario Bros. 1, 2 and 3, The Legend Of Zelda, Punch Out, Final Fantasy, Donkey Kong, Bubble Bobble and more. It’ll also be a little smaller than the original model — Nintendo described it as a “mini replica” — and there will be an HDMI cable to keep with the times.

One important caveat: this looks like a U.S. launch only at this point, but we haven’t confirmed that just yet.

If you’re an old school Nintendo fan (like me!), or know of one, then this might just be the perfect Christmas present… assuming of course that you can stand to wait six weeks to get your hands on it. For first time Nintendo fans or later bloomers, there is also likely appeal here too — particularly since you can pick up a second control pad for two player sessions for $9.99, Nintendo said. That NES Classic pad can also be used with a Wii U and Wii. 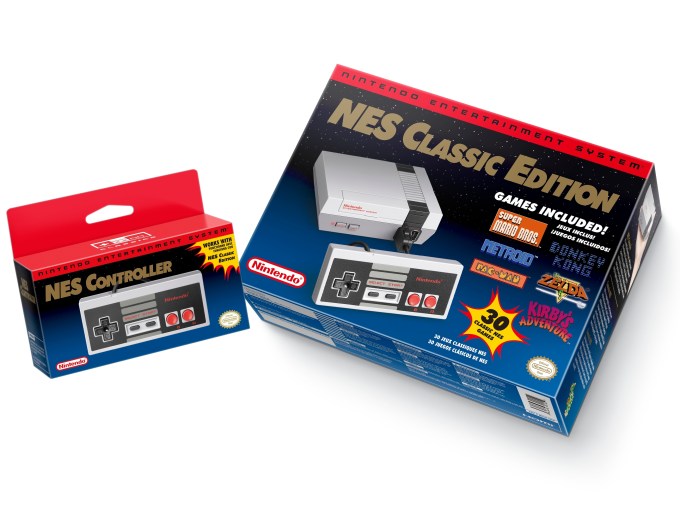 Some other details we teased out of Nintendo: the game selection aimed to strike a balance between popular games and ones that may have slipped through the cracks — “StarTropics was underrated,” said a Nintendo rep — but they’re all you get. No external storage or online capabilities so you can get Bionic Commando or original Contra. Other than that and the fact that it’s HDMI-out only, the company isn’t discussing technical specifications — we’ll have to wait for the inevitable teardown for that.

“We wanted to give fans of all ages the opportunity to revisit Nintendo’s original system and rediscover why they fell in love with Nintendo in the first place,” Nintendo of America President and COO Reggie Fils-Aime said in a statement.

“The Nintendo Entertainment System: NES Classic Edition is ideal for anyone who remembers playing the NES, or who wants to pass on those nostalgic memories to the next generation of gamers,” he added.

Yes, it is indeed.

This year is certainly looking like a time of positive change for Nintendo after years of resting on its laurels. The company has finally released its first mobile games (with more to come), Pokemon Go has become a smash hit, its next-generation NX is coming soon and now the NES is making a comeback.