Even though TechCrunch readers can get really busy with their jobs, their side hustles and everything else in their lives, you’ll probably still have a few moments of downtime today — maybe when you’re driving home from work. A new startup called SpareMin aims to help you fill that time with phone calls.

The app, which is available for both iOS and Android, was created by Neil Mody and Oliver Wellington, who previously founded content recommendation company nRelate (which was acquired, and eventually shut down, by IAC).

“There is this opportunity with your phones … to take advantage of the pockets of time that are underutilized to connect with people and have calls — and that’s SpareMin,” said Mody (who’s also the company’s CEO). “Our hope is those calls could be useful not just for that time but for the future, for everyone else to consume.”

The way it works is that other SpareMin users can send requests to talk to you. Those users could be friends and family, or just random fans or colleagues who want to bend your ear for a few minutes. Then, when you have some free time for a call, you alert the app, which in turn alerts the users whose requests you’ve approved. (That approval process is important — this isn’t just audio Chatroulette.) 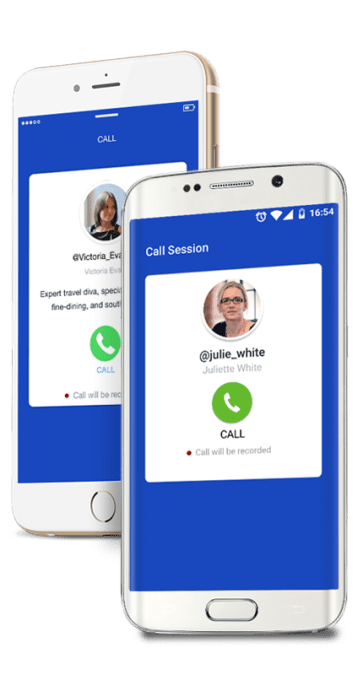 If you’re particularly popular and multiple users are trying to talk to you while you’re still on a call, SpareMin creates a queue — once a call ends (there’s a hard time limit, which is five minutes by default), the next one will begin.

Again, this could be used as a scheduling tool for personal conversations — basically, instead of missing call after call, or going through the trouble of actually scheduling a call, you can get alerted when the person you’re trying to reach is free to talk. It can also be used by comedians who want to connect with fans, or alumni who want to mentor students, or venture capitalists to hear pitches from entrepreneurs. The calls are recorded and can be shared publicly, so SpareMin is also pitching this as an easy way to create audio content.

And naturally, Wellington and Mody have been using it to talk to collect feedback from users about the app.

“The phone call is really broken for today’s world,” Mody argued. “I think we live a much more unscheduled life than ever. Scheduling these calls would just be so much overhead that you’d rather not do them at all.”

As for making money, the app is free but Mody sees opportunities for things like customer service and content marketing: “The use case is as infinite as communication is.”

By the way, if you want to try out SpareMin but aren’t sure what to talk about, the company is also holding a contest for people to share their awkward summer stories.