The Walt Disney Co. is kicking off the third session of its corporate accelerator this week, and revealed 9 new companies admitted to the program. A full list follows at the end of this post.

The companies are developing everything from cinematic virtual reality and holographic content, to robots with human-like facial expressions.

Because alumni of the Disney Accelerator have scored big partnerships with the media and entertainment juggernaut in the past, it is seen as one of the more desirable corporate accelerators out there.

According to research by Future Asia Ventures, there are 131 active corporate accelerators worldwide today, with 13 new programs launching in the first half of 2016. The U.S. has the most with 31 accelerators, representing plenty of competition for dealflow.

Alumni of the Disney Accelerator include Sphero, which created the BB-8 droid Star Wars toy, a best seller for Disney in 2015; and StatMuse, the sports data platform that now provides Disney-owned ESPN with statistical content.

This marks the first year that Disney will be running its accelerator fully in-house without relying on TechStars, the outside partner that helped it get the program off the ground in 2014. Some changes are at hand, accordingly. 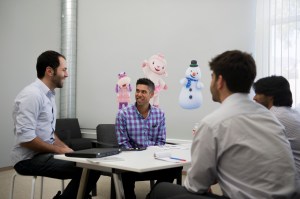 The Walt Disney Company’s Senior Vice President of Innovation, Michael Abrams, said that this year, one team participating in the Disney Accelerator is actually an internal project team, not a startup.

Other participants span from seed- or very early-stage companies to those that have already raised a significant amount of funding and generated millions in revenue.

In the past, Disney Accelerator admitted early stage businesses only and did not include in-house teams. It also applied one-size-fits-all deal terms to all 10 admitted companies. Deals will now be negotiated ad hoc, Abrams confirmed.

“The program has evolved. But we’ve always been very media and entertainment oriented, obviously. What we can do better than other accelerators is to help [entrepreneurs] learn and refine the art of storytelling by working with some of the world’s best creatives, and help them understand the various business segments within media and entertainment from advertising to theme parks,” he said.

Disney often connects startups in its accelerator with operating units of the Walt Disney Co., broadly, so they can pilot projects together or forge partnerships of another kind.

Of the most recent applicant pool, Abrams reported an increase in AI and robotics startups, compared to previous years, and a drop in the number of companies working with GIFs.

The companies selected for the 2016 Disney Accelerator include: