How do you rescue a brand like Ashley Madison after it becomes synonymous with infidelity, poor security, a fateful hack, a massive breach of privacy and at least two suicides? That was the challenge thrown in the lap of the company’s new CEO and president.

The new leadership team’s answer is a complete overhaul of the brand and what it stands for — but will it be enough?

For a CEO, Ashley Madison’s situation is the stuff nightmares are made of, but we’re getting ahead of ourselves. If you hadn’t heard of Ashley Madison before, you probably did when hackers managed to steal their entire customer database, then leaked it online, sending its CEO running for the hills. Why all the brouhaha? Well, Ashley Madison is a site where (mostly married) people turned to get a little something-something on the side. Needless to say, having the sensitive data out on the internet is a huge deal and police have linked the leak to at least two suicides.

A rebrand? But why? 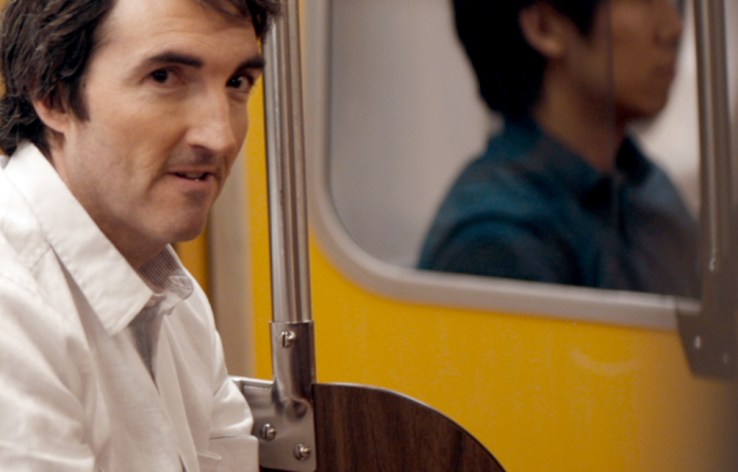 So, erm, not to be rude, Mrs. Madison, but I don’t think this chap eye-humping someone in the subway is the best way to rebrand your company.

I spoke with Rob Segal, the company’s new CEO and started by asking him why the company decided to do a rebrand.

“Wow… Really?” retorted Segal, to what undoubtedly was the dumbest question he’d ever been asked by a journalist. “Everyone knows about what happened in the past and what we have been through. But we also found that 45 percent of our users were single and we didn’t think the brand reflected that. We want to be more inclusive and especially more female-friendly.”

But both the new CEO and its incoming president, James Millership, are confident that the site has life in it, still.

“I think the rebrand is crucial,” says Millership. “It is going to help people take a second look at us.”

Specifically, Ashley Madison is hoping to attract a broader set of people, representing a wider segment of the sexual spectrum.

“We are hoping the rebrand may be appealing to others who have never had an interest in Ashley Madison in the past,” says Segal, admitting it is not going to be an easy battle. Which is the understatement of the century. A lot of the philanderers caught out by the hack were identified by their credit card details and Ashley Madison is going to have to make a solid case to convince people to enter their credit card details. “It is going to take hard work every day.”

In one of the new TV ads, Ashley Madison is attempting to appeal to poly audiences

In the aftermath of one of the most spectacular hacks in recent memory, re-building the trust with the customers is front and center.

“A strong focus on security was a condition on us taking over the company,” says Millership, with Segal agreeing enthusiastically. “We have implemented better, more discreet payment methods and are going through PCI Level 1 compliance as we speak. This work will be completed by September and when it does, we’ll be a leader in the industry.”

In addition to upping the security on a technical level, the company has been working to increase security consciousness on all levels. It has also enlisted the help from one of the top names in security to help shake its bad reputation.

“We are now working with Deloitte, who is doing our cybersecurity along with doing 24/7 monitoring,” Segal explains.

A new name, but not for Ashley Madison

In addition to a rebrand, the name of the company is changing from Avid Life Media to ‘ruby.’

“Yeah, we are changing our name to ruby, like the stone. We want to be reflective, multi-faceted, valuable,” says Millership. But the company isn’t changing the name of its flagship site.

“We looked a the name carefully,” admits Segal. He won’t come out and say that the hack did them any favors, of course, but the fact remains that before the hack, a lot of people wouldn’t have heard of them and the company already revealed its site was growing rapidly in the months after the hack.

“Ultimately, the brand has tremendous brand recognition,” Segal says, concluding that the Ashley Madison name is here to stay. He also suggests that the company has several other properties in the pipeline.

Overall, it’s all change for the company and its 140 employees — the company is moving to a new facility in Toronto and its leadership team is claiming continued rapid growth.

Ashley Madison could have done a better job than airing three adverts all centering around the basic premise of “sad man is made happy by attractive girl.”

Ashley Madison is launching its new brand and re-positioned message with a series of new advertisements (embedded below), which are aiming to re-shape how potential customers feel about Ashley Madison.

I’m not sure how well it’s going to work. The adverts range from someone creepily staring at a girl on the subway, an almost impossibly sad video of a couple in a passionless marriage and an admittedly only slightly curious polyamory-embracing clip. Look, I’m no advertising critic (or am I…), but I can’t help but feel that if Ashley Madison wanted to push for gender equality and appeal to women more, it could have done a better job than airing three adverts all centering around the basic premise of “sad man is made happy by attractive girl.”

I think it’s a fool’s errand to try to separate Ashley Madison’s reputation as a site for cheaters, but that’s the genius of running the television campaign now. Re-activating the audience who found out about the site because of the hack and thought, “Hey! I wish I knew about this site before. I’ll have to check them out once they sort out their security clusterclunge,” could potentially be big enough market to make it all worth while.