Days before the Juno spacecraft is scheduled to arrive, astronomers have captured an enormous aurora at the north pole of Jupiter. The imagery, released this week, was taken back on May 19 using NASA’s Hubble Space Telescope as part of a program to study how solar wind affects auroras on Jupiter.

Hubble Tracks Bright Auroras on Jupiter This composite video illustrates the auroras on Jupiter relative to their position on the giant planet. As on Earth, auroras are produced by the interaction of a planet's magnetic field with its atmosphere. The Jupiter auroras observed by NASA's Hubble Space Telescope are some of the most active and brightest ever caught by Hubble, reaching intensities over a thousand times brighter than those seen on Earth. Hubble's sensitivity to ultraviolet light captures the glow of the auroras above Jupiter's cloud top.The auroras were photographed on May 19, 2016, during a series of far-ultraviolet-light observations taking place as NASA's Juno spacecraft approaches and enters into orbit around Jupiter. The aim of the program is to determine how Jupiter's auroras respond to changing conditions in the solar wind, a stream of charged particles emitted from the sun.The full-color disk of Jupiter in this video was separately photographed at a different time by Hubble's Outer Planet Atmospheres Legacy (OPAL) program, a long-term Hubble project that annually captures global maps of the outer planets.Auroras are formed when charged particles in the space surrounding the planet are accelerated to high energies along the planet's magnetic field. When the particles hit the atmosphere near the magnetic poles, they cause it to glow like gases in a fluorescent light fixture. Jupiter's magnetosphere is 20,000 times stronger than Earth's. These observations will reveal how the solar system's largest and most powerful magnetosphere behaves.Credit: NASA, ESA, J. Nichols (University of Leicester), and G. Bacon (STScI)Acknowledgment: A. Simon (NASA/GSFC) and the OPAL team

The video above was created by pairing many far-ultraviolet images from Hubble with a full-color disk of Jupiter that was photographed at a different time.

Like on Earth, an aurora is produced when highly charged particles interact with the atmosphere. For Earthlings, the light show begins with our incredibly active sun, which sends charged particles, in the form of solar wind, out into the solar system. In addition to the sun, Jupiter has an additional source to charged particles: its volcanic moon, Io. 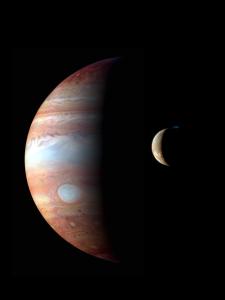 For both Earth and Jupiter, these charged particles ultimately hit magnetic fields, which direct the particles to the north and south poles.

On Earth, we know this phenomenon as the northern lights, or the aurora borealis. They also happen in the south pole (aurora australis). We just don’t hear the term “southern lights” often because there are fewer people there to witness them.

Jupiter’s aurora is especially interesting to study because the planet’s magnetosphere is roughly 20,000 times stronger than the Earth’s. For this reason, Jupiter’s auroras are also hundreds of times more energetic than the ones we have on our planet.

By studying Jupiter’s auroras, scientists can better understand how the most powerful magnetosphere in the solar system behaves compared to the smaller one at home that we know so well.

The aurora seems to be lighting the way for NASA’s Juno spacecraft, scheduled to reach Jupiter’s orbit on July 4. As Hubble observes and measures the auroras, Juno will be on location measuring the properties of the solar wind itself.

“These auroras are very dramatic and among the most active I have ever seen. It almost seems as if Jupiter is throwing a firework party for the imminent arrival of Juno.” Jonathan Nichols, University of Leicester, U.K. Principle Investigator of the Jupiter aurora study

Jupiter’s powerful magnetic field may be good for pretty light shows, but it’s not particularly great for orbiting spacecraft. Juno had to be specially designed to withstand Jupiter’s dangerous environment. Equipment on board was radiation-hardened to make Juno’s electronics resistant to damage, at least for a period of time.

Once in orbit, Juno will measure Jupiter’s magnetic and gravitational fields. It will also have a camera to capture high-resolution images of the planet, including pictures of the poles from above — something that has never been done before.

Unfortunately, Juno won’t be able to survive forever. The mission is designed to complete 36 orbits of Jupiter and then de-orbit into the planet, meeting its end in 2018.

Juno’s journey around Jupiter begins July 4 at 11:18 pm ET. At that time, the spacecraft will ignite its main engine for 35 minutes until it reaches the desired orbit around the gas giant. Scientists will then have just a small number of precious months to capture as much data as possible before Juno succumbs to damage and must end its mission.