Slither.io is not new, but it is crazy popular. The game has been sitting at number one on the iOS gaming charts for some time. Slither.io has been available for just over three months now and, according to the most recent ranking, the game still holds the number one game, action game, and simulation game spots in the U.S. Apple App Store. It’s also the number six free app overall, which means this game currently ranks higher than Google Maps, Uber, Netflix and a variety of other free apps that you likely use on a daily basis.

Clicking into the game description, it looks and sounds a lot like the old desktop game Snake or Atari’s Centipede, and it is. Slither.io is loosely based on these classic arcade games, but refreshed with a modern two-dimensional design, instead of a flat one.

In the game, you are a cute, doe-eyed worm looking for snacks. You maneuver through the void by avoiding crashing into other worms who may cross your path. To grow and gain points, you gorge yourself with glowing light.

When you first start, you are a small, skinny little thing which makes you nimble and easy to maneuver. But as you get bigger, you expand in both length and width. The bigger you get, the harder it is to make a quick turn or get out of the way. If another worm crashes into you, you can gobble up their life force and save yourself a ton of work.

There are two ways to play: online against other players or local against the game’s AI. For both, the gameplay is basically the same. However, if you are on spotty Wi-Fi, playing AI is the way to go.

After playing both ways, I noticed that you bump into many more bigger worms when you play online. Also, since you are against an actual human in the online mode, you often find yourself up against smart, strategic players who will trap you to eat you up. The AI seems to be slightly less aggressive. 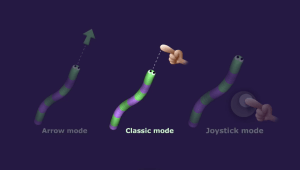 Now let’s talk controls. There are three modes. Arrow mode, for me, was the easiest. You just drag your finger along the screen to guide your worm. Then there is Classic mode, where you tap to change directions. Classic definitely requires more patience and skill. It’s harder to make quick dodges when other worms are headed your way.

Your third option is Joystick, which, skillwise, is somewhere in between. There is a small gray circle in the bottom corner that you use as a touch control in a similar way to a traditional joystick. It’s not as intuitive as Arrow mode, but easier to to get out of a sticky situation. On the customization side of things, you can personalize your worm by changing skins. I was pleasantly surprised by all the free character options. Many other free games make you pay or earn a cooler look, but Slither.io lets you mix it up with a ton of fun designs from the start. 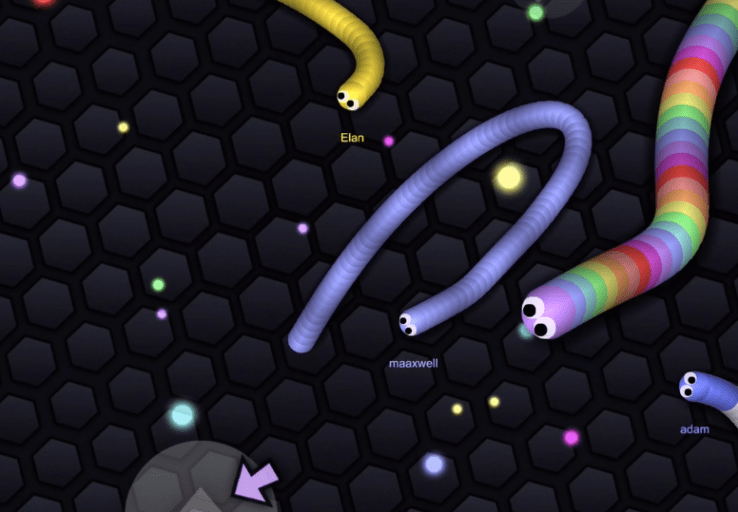 According to a recent article in The WSJ, Sither.io has been downloaded more than 68 million times across mobile devices and averages 67 million daily players on web browsers. The rags-to-riches story behind that app is also quite interesting. The WSJ reports that, prior to the popularity of Slither.io, the game developer could barely afford rent. Now he makes an estimated $100,000 daily, largely from players paying $3.99 to play the game ad-free.

I personally am not super into the game, but tons of folks are. So it’s me, not you.

Slither.io is a free download on the iTunes App Store and Google Play. You can also play online on your desktop at Slither.io.