Before Oculus, most casual observers regarded virtual reality as somewhere between science fiction and novelty, fodder for cheesy 1990s films and overpriced, underperforming tech demos. Now it’s immediate and inevitable, and for those walking through the halls of the Los Angeles Convention Center this week, entirely unavoidable.

In the space of a few short years, the company has gone from duct taped prototype to the forefront of the $23.5 billion gaming industry, and it’s hard to deny after a quick spin with the company’s Rift headset that all of this feels like the future.

Facebook certainly thinks so. In 2014, the social media giant purchased the hardware startup for $2 billion in cash and stock, further accelerating the company’s already impressive growth.

“I don’t remember personally thinking about an acquisition,” says co-founder Nate Mitchell, seated at a table in the media portion of the company’s E3 booth. “I don’t think we thought about that a lot. We were excited about delivering this thing on our own in a big way. We were so fired up about VR. The company was growing. It was going super well. Then, basically what happened is we got connected to Mark [Zuckerberg]. There was this opportunity to turbo‑charge everything that we wanted to do and take it all to the next level in an incredibly accelerated rate.”

“They are one in only a handful of companies in the world that have the resources that it will take to actually push a new platform like this and make it happen,” adds the company’s Hawaiian-shirt-sporting co-founder, Palmer Luckey, seated directly to Mitchell’s left. “They believed in VR, and they believed that it could be the next major computing platform. I’d say not many people, especially then, saw that vision. It seems so obvious now. We look around E3 and we say, ‘Oh, obviously, this is the next step.’ ”

And indeed, Oculus cast an impressive shadow over E3 this week, both through its own large booth and presence at third-party sites, as well as the exponential explosion of VR demos on the show floor. Practically everywhere you turned, more traditional means of interacting with games had been replaced by headsets and motion controls. 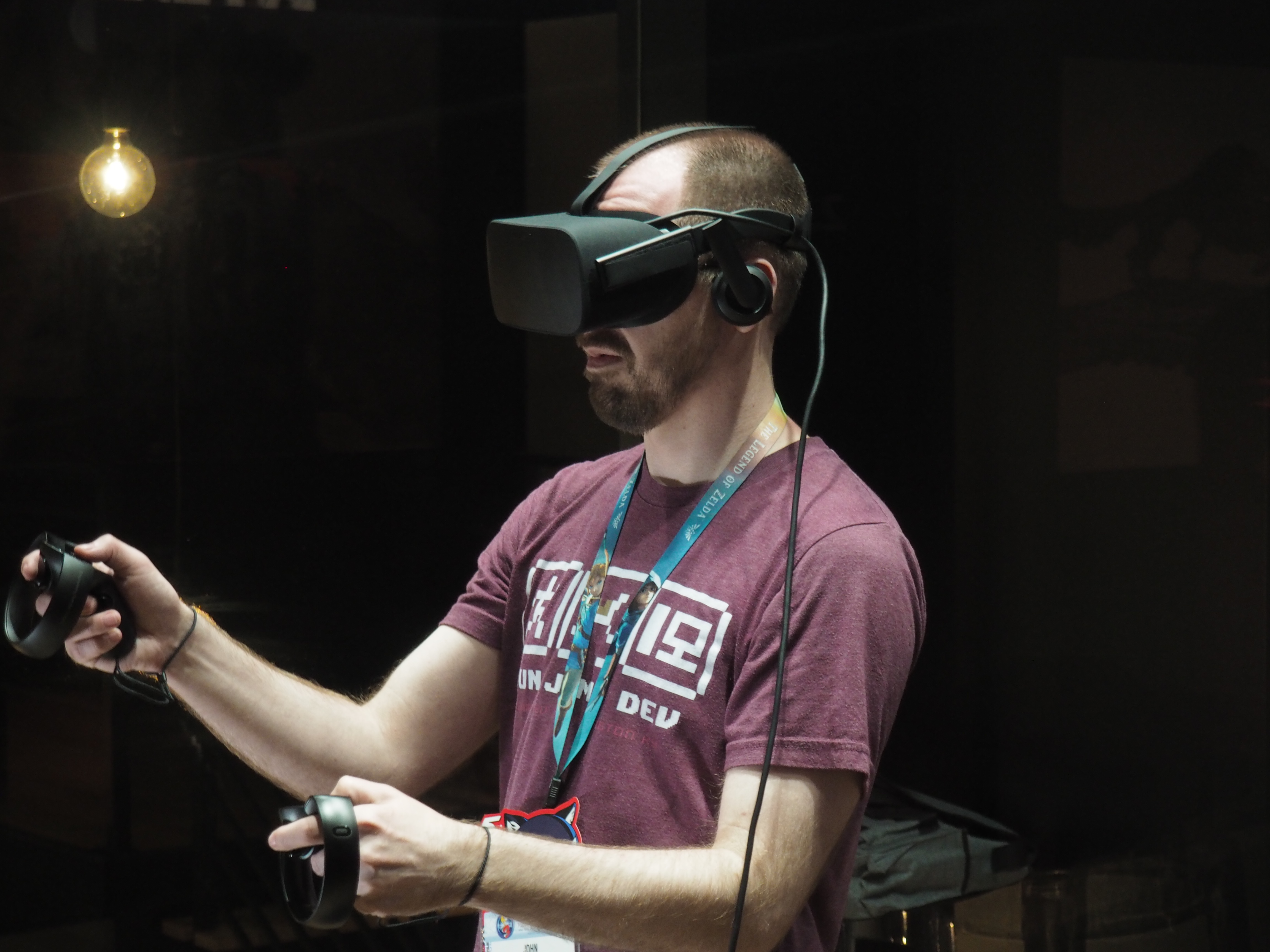 Tech giants like Sony, Google, HTC, Microsoft and Samsung clearly concur with Facebook’s $2 billion bet, each having announced their own unique approach to VR. But will public demand match industry interest? After decades of false starts and unfulfilled promise, it’s easy to see how the public might not want to take a $600 plunge on an untested technology. Luckey and Mitchell both visibly bristle when I make a broad analogy to 3D TV, a recent industry-backed technology that failed to launch because of limited content and virtually non-existent public interest.

“When you have more people investing in VR games, whether it’s us, or Sony, or someone else, that means a greater pool of VR developers out there who know how to make VR games,” explains the 23-year-old Luckey. “The next time around, they’re a lot more likely to make a VR game. They can do it cheaper, better and faster because they’ve already learned so much. The more people enter in the VR industry at this point, the better.”

Luckey and Mitchell believe the sentiment extends to lower-end devices that offer a far more affordable, if less technically impressive, version of the immersive medium. “We’re pretty bullish,” says Mitchell. “Samsung Gear VR is powered by Oculus. We’re very bullish that that’s a great VR experience. In terms of accessibility, adoption and scale, it’s awesome. What we’ve seen ‑‑ we have stats ‑‑ there are over a million people using the device just last month. That’s scale and the tremendous amount of interest that we’re seeing from people, I do think that’s a great gateway into the VR ecosystem.”

Oculus and other manufacturers have also clearly learned from the mistakes of previous hardware platforms by assuring that the device launches with a robust selection of compatible games. “It’s about building great games that are designed for the hardware for the input,” says Mitchell. “That’s always 100 percent where you’re going to have the best experience, especially in the case of gaming.” 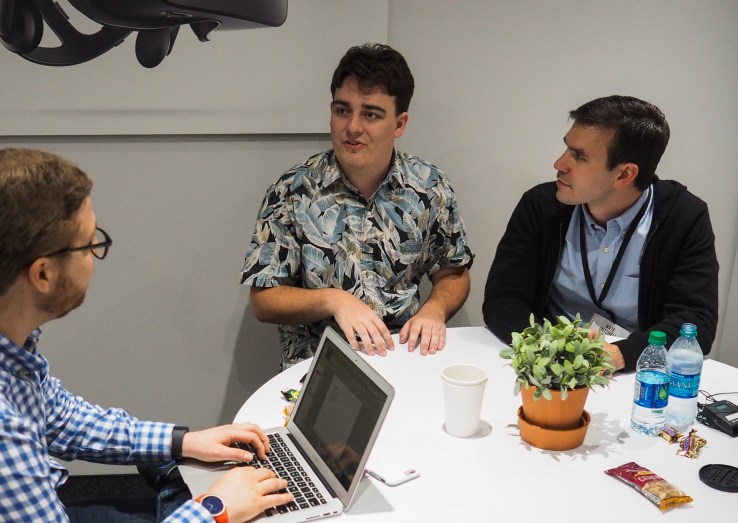 Luckey adds that while examples of good ports do exist, the rush to adapt non-VR content to the platform rarely has the intended effect.

For its part, Oculus has been working alongside developers to help design content optimized for the platform. Within those discussions, the company has struck deals that bring the content exclusively to the company’s platform for a pre-set time. It’s a strategy some users have voiced concern about, because of concerns that it might limit content on the competition’s device or hamper the growth of the burgeoning virtual reality space. Luckey explains that such strategies are standard practice in gaming. 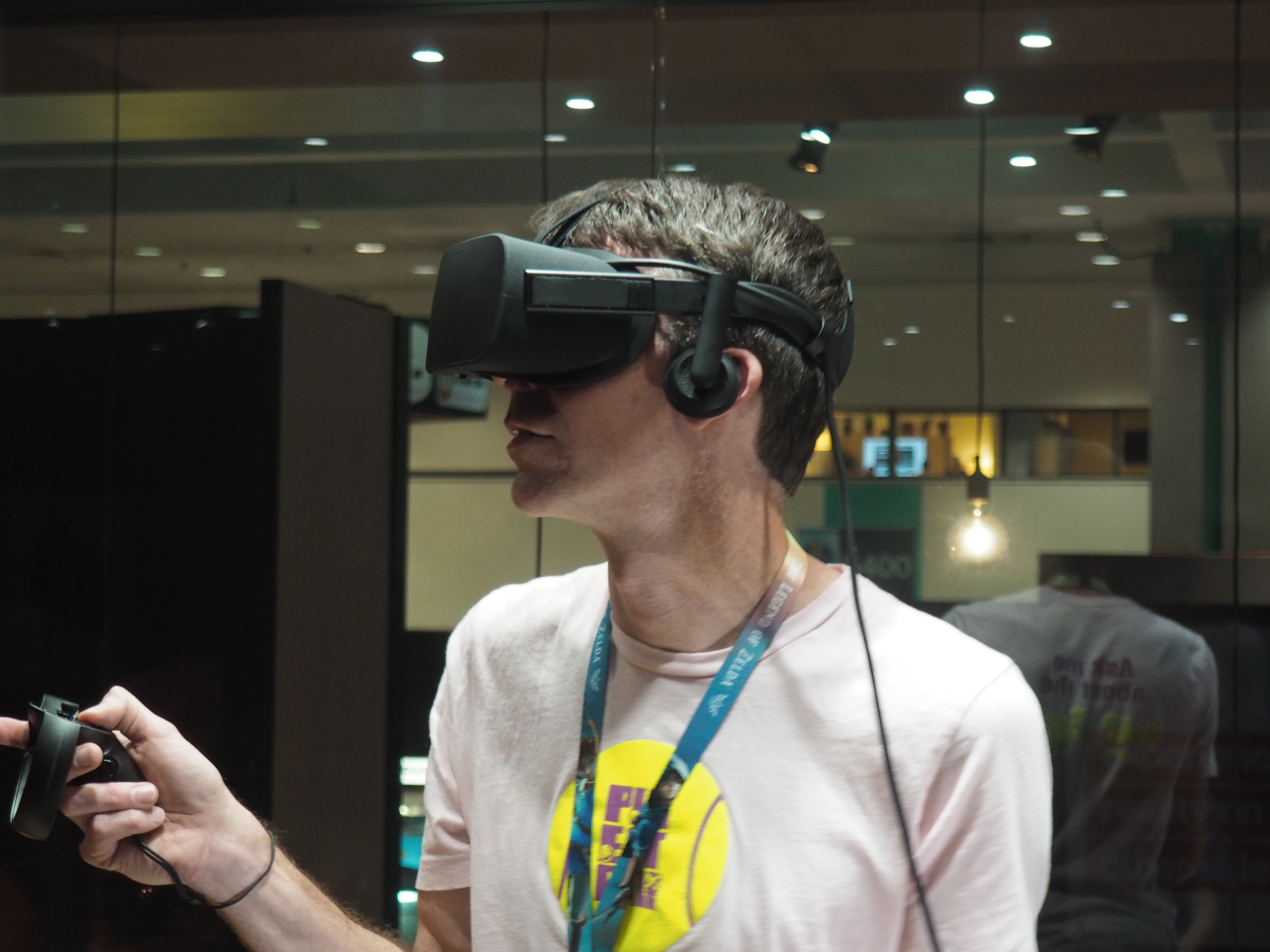 “You see Sony investing in their content the same way,” he explains. “They want to make things that take advantage of their features that they have in the best way possible. Over time, that’s how the VR industry is going to move forward. In the short‑term and the long‑term, it’s good. The short‑term pain that some people feel, and I totally understand, is I want to play this game and I’m not able to right now. The reality is, I can see where that’s painful for some people, but that doesn’t mean that it’s bad for the VR industry, or that it’s fragmenting it, or in the long run, it’s not the right way for the ecosystem to work.”

“The Oculus Studio stuff is going to remain exclusive to the Oculus store and platform,” Luckey continues. “That’s not to say that you’ll never be able to play it on other hardware, but it very much is exclusive to the Oculus platform. When you’re looking at some of these other things, where sometimes you have devs come to us and say, ‘Hey, we need help finishing our game,’ or ‘we want to make this game bigger and better,’ we ask if those guys launched on Oculus first if we’re going to help them fund that. We don’t ask them to stop developing for other platforms. We don’t tell them they can’t launch on other platforms. In those cases, they are going to be coming out on other platforms aside from Oculus in the future.”