Over the weekend, Apple began inviting developers to beta test the App Store’s new Search Ads. Announced in advance of the company’s 2016 Worldwide Developer Conference this month, Search Ads are perhaps one of the biggest changes to the way the App Store operates in years, as it will allow developers to bid to become the top-ranked result when users perform a search by keyword.

The addition of this feature comes alongside a broader App Store overhaul which aims to address the long-term problem of app discovery – that is, there are now so many apps available for download that a simple chart-based system of “top ranks” or featured selections is no longer the best way to find new apps to try. To some extent, the move to search over browsing lists mirrors the change the web itself once saw. Links to websites used to be organized in directory-style systems, but eventually the web grew so large that search engines became a more practical way to surface the content you wanted to find.

The number of available apps, of course, is minuscule when compared to the size of the web. While there are roughly a billion websites, the App Store has just topped 2 million apps. However, that’s still enough apps to make discovery by clicking through lists and charts a serious challenge. 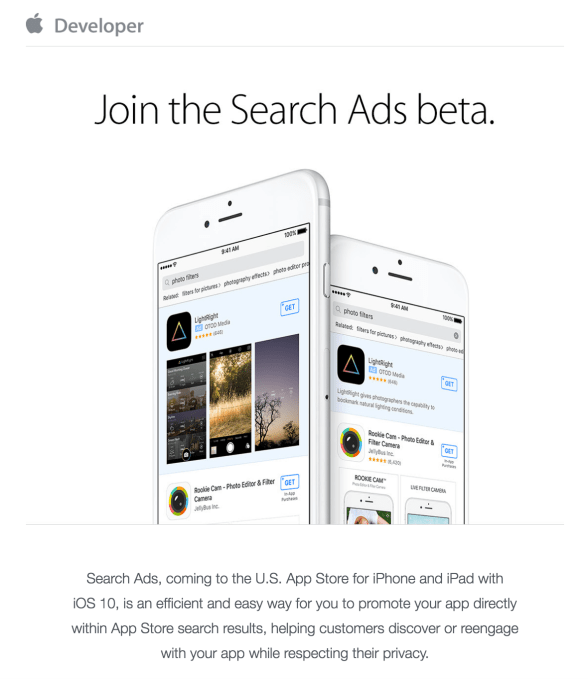 Good App Store SEO, or ASO, has become an increasingly important goal for app developers publishing to Apple’s app marketplace in recent years, as this being able to boost your search ranking means more users will see your app when they search for a related term. Entire businesses have even sprung up to help serve the needs of developers who want to track, understand and improve their ASO.

But the introduction of App Store Search Ads gives developers another way to have their apps appear at the top of the results – through paid advertisements. Apple explained previously that these ads would operate through an auction system, with no minimums and no exclusives.

In an interview at WWDC with iMore, Apple Senior Vice President of Worldwide Marketing, Phil Schiller, offered a little more insight into how that system would work. He explained that, by not requiring a minimum bid, the ads would be open to developers with even a small amount of money and that large developers couldn’t simply outspend on a given term in order to buy it out.

Instead, Search Ads will rotate and relevance as determined by users’ clicks, not bid, will be the top priority. “…The users are the ultimate deciders of what gets shown…they’re a big input to what is relevant to the search result,” he said.

This setting means that irrelevant ads won’t win the auctions – they won’t even get in if they don’t pass a certain threshold for relevance based on keywords, reviews, downloads and other factors.

In addition, he spoke about one of the more debated decisions around Search Ads which is that you can use someone else’s brand in your ads words. That’s not something all developers agree makes sense or will help improve app discovery.

Pretty much what I figured would happen. pic.twitter.com/VTiaKunwCb

Explains Schiller, Apple decided to implement “conquesting” as it’s called (using someone else’s brand in your ad words), because the company believes it will help the smaller developers.

But this system has its faults too – if someone searches for an app by its name, and the developer refuses to participate in Search Ads, then it can cede the top spot in the search results to its competition. This is being debated in Apple’s developer forums. With the App Store already troubled by clones, Search Ads could allow a developer to simply pay to get copycat app listed above the original in the results.

In addition, there’s concern that because of larger developers’ deeper pockets, they can bid more often, then win more often. After all, at the end of the day, you have to have an ad budget to buy ads. Not all indie devs do.

Search Ads are in beta over the summer, and available for free while in testing. Apple says that this way, all developers can try them out and help them improve by offering feedback. During this period, there’s no data provided nor is there access to the Search Ads Campaign Management and Reporting interface, but apps may receive additional downloads as a part of their participation.