There’s a big shift happening in how enterprises buy and deploy software. In the last few years, open technology — software that is open to change and free to adopt — has gone from the exception to the rule for most enterprises. We’ve seen the IT stack redrawn atop powerful open-source projects, with developers opting for an “open-first” approach to building solutions. More than 78 percent of enterprises run on open source and fewer than 3 percent indicate they don’t rely on open software in any way, according to a recent market survey by Black Duck Software. 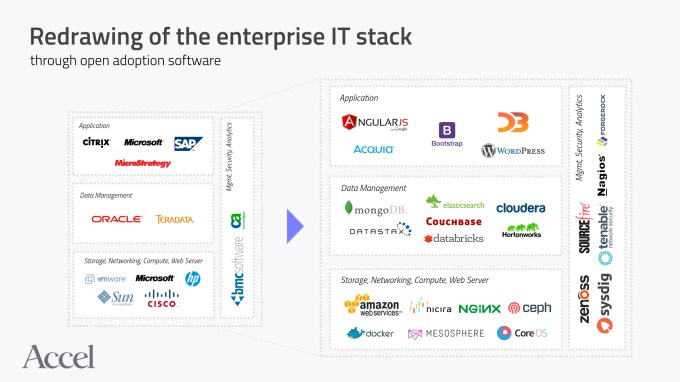 Openness is a near truism in the Valley, but today projects like Hadoop, Cassandra, Docker and Mule are infiltrating even the most conservative and dogmatic organizations. As such, startups like Cloudera, DataStax and MuleSoft are generating hundreds of millions of dollars in revenue each year from real enterprise customers by selling proprietary, value-added products around their open projects.

This is a new wave in software — one that’s not only displacing incumbent markets, but creating entirely new ones. We call these Open Adoption Software (OAS) companies, and we believe they’re primed to build meaningful businesses — and drive large economic outcomes.

We’re witnessing a big shift in how software is consumed.

OAS companies are constructed differently. They go through three phases of company building: Project, Product and Profit. Companies built atop this “3Ps” model need to look largely the same and be held to similar financial standards as traditional enterprise software businesses by the time they make it into the “Profit” phase. We discussed this a few weeks back in a panel conversation with startups and financial analysts — a timely conversation, as some of these companies reach the scale to potentially IPO. This feels an awful lot like 2003, just before the first SaaS companies started going public.

OAS is a customer-driven phenomenon

Open software has already rooted itself deep within today’s Fortune 500, with many contributing back to the projects they adopt. We’re not just talking stalwarts like Google and Facebook; big companies like Walmart, GE, Merck, Goldman Sachs — even the federal government — are fleeing the safety of established tech vendors for the promises of greater control and capability with open software. These are real customers with real budgets demanding a new model of software.

And the drumbeat is only getting louder. Each year we host 15 Fortune 500 CIOs as part of Accel’s Tech Council, and we continue to hear criticism about proprietary software (“expensive, slow to change”). Here are a few trends we identified that are driving customers toward this new model:

All of this is to say: We’re witnessing a big shift in how software is consumed. OAS is openly adopted and openly developed, and is quickly becoming a dominant model for how enterprises build and deliver IT.

While most OAS companies have at least some amount of freely available or open-source components, open source and OAS should not be conflated. Open source describes a software development methodology, whereas OAS pertains more to a go-to-market and company-building philosophy. OAS is not about cheaper alternatives to proprietary on-premise software. It is about creating new markets more so than displacing incumbents. It’s innovative, it’s developer-driven and it’s the next wave of software adoption.

The next wave of software

With each successive wave of technology — from mainframe to client-server to ‘X’aaS (IaaS, SaaS, etc.) to OAS — software has gotten progressively easier to adopt. Therefore, adoption has happened faster and has reached a broader audience than the wave before it. 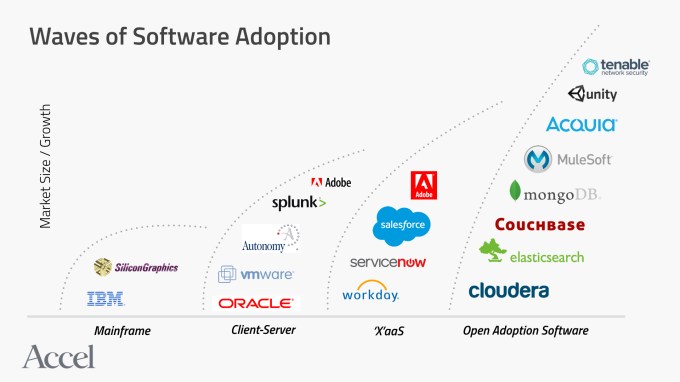 Through it all, the customer desire for bigger, faster and cheaper offerings remains constant. The technological innovations that each wave brings facilitate change in how software is packaged and delivered so that customers can gain some form of efficiency or cost savings.

Being openly adopted is not a panacea.

With all of these shifts, industry pundits predicted that the new wave will commoditize existing categories. While some layers of the stack do get cheaper, consumption on the layer above consequently expands dramatically as more applications are developed and new use cases emerge. This new usage outpaces any commoditization. Thus, the value of the market opportunity expands rather than contracts. Salesforce and Amazon Web Services (AWS) exemplify this. Literally thousands of new businesses exist as a result of these platforms than ever could have in the past.

OAS is not an answer to all problems

While OAS companies drive adoption much faster than their fully proprietary counterparts, being openly adopted is not a panacea. Particularly as public cloud vendors begin hosting open-source projects as a service, it’s tremendously important that these companies thoughtfully decide which parts of the product will be open and which parts won’t. There is definitely a unique failure mode in which OAS companies go too open and fail to monetize sufficiently.

While we certainly believe in OAS, not all open projects are the basis for OAS companies, and not all of these companies are going to be publicly traded — some will be niches, some will struggle, some will be M&A opportunities. It’s hard to predict the winners out of the gate. While OAS companies will likely have the same success rate as traditional software companies, there is reason to believe that the winners will be bigger than their predecessors.