Blue Origin has successfully completed the fourth launch and landing of their New Shepard rocket and crew capsule. With another nominal flight test, Jeff Bezos’ rocket company is marching toward their goal of becoming the first private company to send tourists into space.

And along the way, they’re perfecting the ability to reuse suborbital rockets over and over again – a feat that’s never been done before. After four successful launches and landings with the same New Shepard vehicle, Blue Origin is starting to make this whole suborbital rocket reusability thing look easy.

The purpose of today’s uncrewed mission was to test the scenario in which one parachute fails to deploy during the descent of the New Shepard crew capsule. Blue Origin is using launches like these to test out their New Shepard system before using it to bring humans into space.

A failed parachute is a possible, although unlikely scenario, and the company needed to test their capsule’s robustness to a failure like this. Jeff Bezos has previously explained the credibility of such a scenario, pointing to the Apollo 15 mission when one parachute failed during descent. 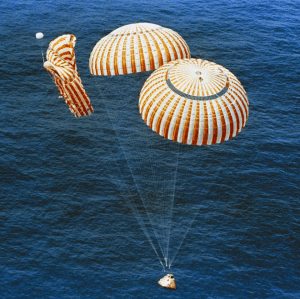 Unlike the three previous launches of New Shepard, Blue Origin changed things up a bit and provided their first ever live webcast of the launch and landing.

Within eleven minutes, the New Shepard system launched into space and both the booster and the crew capsule soft-landed back on Earth.

The New Shepard booster brought the crew capsule, filled with science experiments for this particular launch, on a suborbital flight profile into space where the experiments inside felt four minutes of weightlessness. Shortly after, the booster separated from the capsule to begin its automated journey down to the landing pad. 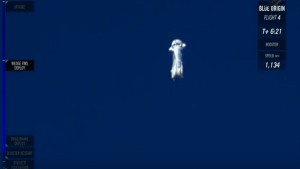 New Shepard upon descent, slowed by circular fin on the top and smaller fins along the outside / Screenshot of Blue Origin webcast

New Shepard’s ring fin on the top of the rocket (where the crew capsule was connected) and deployed fins along the circumference helped stabilize the rocket on the way down. The booster slowed to about five mph as it hovered slightly, just over the launch pad. Landing gear was deployed and the rocket softly touched down. 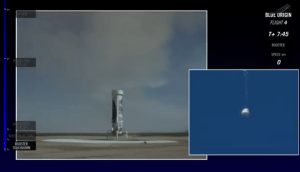 This nominal landing would result in a “soft, pillowy” landing for the astronauts inside, according to Blue Origin. Interestingly, the Blue Origin co-hosts stated that, while three parachutes are ideal, the capsule was designed to keep humans alive in the rare case that only one parachute deploys successfully. 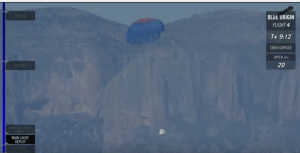 During the live webcast before the launch, Blue Origin explained that if there were any issues or anomalies detected on the crew capsule, all three parachutes would deploy and the one-failed parachute test would be aborted. Because the company wants to maintain the capsule hardware for future flights, they didn’t want to have problems stack on top of each other and risk irreparable damage to the capsule.

The capsule itself is designed with paying human passengers in mind. Blue Origin’s near term goal is to bring tourists into space. Catering to that experience, the New Shepard capsule will contain the largest windows that have ever flown into space in order to give humans the best possible view.

The capsule used in these initial tests, however, does not have any windows (they’re only painted on), but the next iteration of the capsule will include windows that make up as much as 1/3 of the capsule surface area. 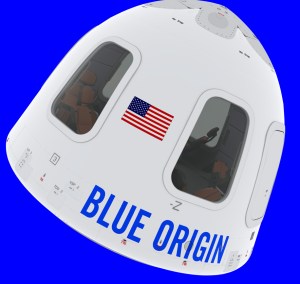 With today’s mission, Blue Origin has successfully flown the same rocket booster and crew capsule into space four times with plans for even more flights with the same equipment.

Earlier this year, Bezos stated that they are working to bring their first humans into space as early as 2018. If tests continue to go as well as the last four New Shepard flights, the company could soon become the first private company to send tourists into outer space.