Today Prince William exhorted tech leaders to do something about cyber-bullying at the Founders Forum conference in London.

Representatives from Google, Twitter, Facebook and Snapchat listened to the speech, but some of the biggest tech firms have already joined the Prince’s taskforce on the issue which will be chaired by Brent Hoberman, former founder of Lastminute.com and more recently a maven and investor in the UK tech scene via Founders Forum.

Sir Tim Berners-Lee, inventor of the world-wide web, has also joined the taskforce, which will work with experts from the Anti-Bullying Alliance, NSPCC, Internet Matters, Diana Award and UK Council for Child Internet Safety.

The Duke of Cambridge said that as a parent he had been “appalled” by examples of online abuse, and while he stressed that new technology could be a “force for good” he added: “What we were seeing was that social media and messaging had transformed bullying from something that was not only the torment of the classroom and playground, but something that followed you home as well – to the one safe haven that children should have.”

William also toured a tech startup showcase with robots and VR companies including Boesky, created by Keith Boesky, former president of Eidos Interactive. The Prince also met with Flex, a Silicon Valley company which produced a talking robot for SoftBank Robotics. The robot helpfully fell over. 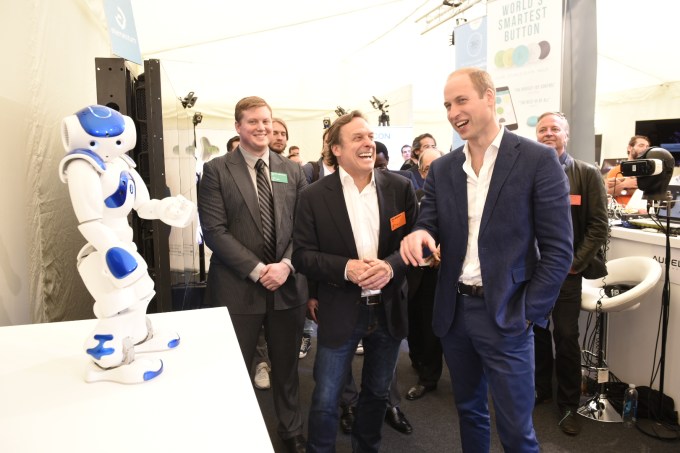 During the visit the Duke, who is an air ambulance helicopter pilot, sat in an experimental drone-like machine that can carry a person. The Snowstorm is a research project created by engineering undergraduates from the National University of Singapore. William sat in the machine as its 18 rotor blades spun, but it did not take off for safety reasons.

Meanwhile at the conference some 50 leading European entrepreneurs, including the founders of Skype, BlaBlaCar and SoundCloud called for a “single start-up market” in Europe.

The joint initiative from the Unicorn Forum and Founders Forum aims to create a competitive startup business environment and follows on from the ‘29th regime’ of the Union, a single economic framework for innovative and high growth startups in Europe.

While the European Commission is pushing a policy it calls the Digital Single Market, to harmonize rules across all 28 member states in areas including copyright law and e-commerce, the Unicorn Forum says the EU’s plans risk favoring larger business, and not helping younger startups.

Hoberman says this deficiency has meant that Europe has not been able to create huge companies such as Apple and Facebook, despite having a population of over 500 million, far larger than the US.

The call for a single start-up market comes as Britain heads towards a referendum on its membership of the EU. Most surveys show the vast majority of UK tech companies believe “Brexit” would be a huge backwards step.

The conference also saw pitches from idea-stage startups in a competition billed as “The F Factor”, which featured X-Factor judge Simon Cowell.

Pollen8 – a marketplace for employment
Who’s in – Crowd-fund a people’s movement
UpLearn – Online courses for students
DeposititWhere – Earn higher interest by depositing cash in a country with a higher interest rate than yours.
accuRx – a big data tool to help clinicians make more accurate prescription decisions and reduce the use of antibiotics.

Founders Forum has ramped up its activity in the past year starting a blistering array of new initiatives, including “Founders of the Future”, a diverse community of young people aged 16-35 selected from across Europe using artificial intelligence and peer recommendations.

FF has also started Founders Factory, with the aim of launching 200 startups in the next 5 years by working with corporate partners.