The SpaceX Falcon 9 launched from Cape Canaveral, Florida, this morning at 10:29 a.m. ET carrying two communication satellites to Geostationary Transfer Orbit (GTO). Shortly after launch, the Falcon 9 first stage returned to a drone ship in the Atlantic, but it came in too hard and the booster exploded upon touchdown.

SpaceX CEO Elon Musk said the rocket experienced an RUD, which stands for Rapid Unscheduled Disassembly and is the term SpaceX uses when a rocket explodes during a recovery attempt.

Ascent phase & satellites look good, but booster rocket had a RUD on droneship

Compared to missions to LEO (about 400 km altitude), SpaceX missions to GTO (about 32,000 km altitude) require their rocket to move much faster, meaning the booster will need to be slowed down from a higher velocity ultimately making a recovery more difficult.

Today’s mission was SpaceX’s second dual communications satellite launch to date. On board the Falcon 9 were two Boeing-made satellites known as EUTELSAT 117 West B and ABS-2A.

SpaceX successfully deployed both satellites, marking on all accounts a successful mission for today’s launch.

Second of two satellites being deployed into proper orbit with today's launch https://t.co/XcHFBPEyfk

As for the rocket recovery, more data is required to understand why the rocket experienced an RUD.

After SpaceX’s four successful recoveries in just the last seven months, it’s easy to forget that soft landing an orbital rocket is still very much in an experimental phase of development. 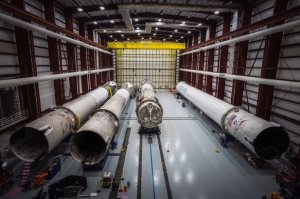 Musk did state that the landing might have experienced the hardest impact to date.

Landing video will be posted when we gain access to cameras on the droneship later today. Maybe hardest impact to date. Droneship still ok.

It’s important to note that the booster did reach its mark on the launch pad; it was just the soft landing portion of the recovery that went awry. Most of the debris remains on the launch pad, which is helpful as it can allow SpaceX to analyze the rocket and collect useful data. 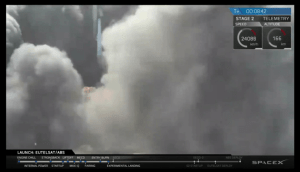 Screenshot of SpaceX live feed of rocket landing, right before the feed dropped

As the booster lands it shakes the drone ship pretty hard, which can cause the video signal to be lost at the last moment.

Like previous failed attempts, SpaceX plans to release the footage of the booster’s RUD to the public. Musk noted on Twitter that this should happen sometime this afternoon once they’ve retrieved the cameras from the drone ship.

Landing video will be posted when we gain access to cameras on the droneship later today. Maybe hardest impact to date. Droneship still ok.