Microsoft has been searching for ways to strengthen its flagging Dynamics customer relationship management (CRM) tool, and it made a couple of moves this week (one quite significant) with an eye toward making life easier for sales people and enhancing its marketshare in the process.

For starters, you might have heard that Microsoft bought LinkedIn on Monday for a cool $26 billion. Microsoft indicated part of the thinking behind the deal was transforming sales to what it’s calling “social selling.” What that means is taking advantage of the data in the core LinkedIn social networking database and combining it with LinkedIn’s Sales Navigator tool to uncover lots of information about customers and leads that could help drive more sales. When you link all of that information to Dynamics CRM, it has the potential to be a powerful combination.

Brent Leary, co-founder and partner at CRM Essentials, who has followed the market for many years says it could give Microsoft Dynamics a significant boost.

“If they leverage the data in LinkedIn alongside the other data sources they have through their systems and run it through machine learning and artificial intelligence (AI),  it could be potentially game-changing,” he said.

One thing to watch is whether Microsoft decides to open the LinkedIn APIs to third party developers, which would also make it available to rivals like Salesforce. Leary believes it will because it will increase the value of the LinkedIn data.

Boosting Dynamics is probably not the only reason Microsoft paid $26 billion for the company, but it’s certainly one good use for it.

Once you’ve identified good customer targets and reached a point where you need to share a quote, sales people need to build sales documents quickly. That’s where this week’s partnership announcement with PandaDoc comes in. It may not be up there with a $26 billion acquisition, but it provides a simple way for sales people to build quotes and get electronic signatures to close the deal. Up until now, PandaDoc, which boasts 5000 paying accounts, had worked with Salesforce and some other CRM tools, but it hadn’t worked with Dynamics.

The product enables reps to build a quote quickly from a library of approved custom content and pricing information that updates automatically for reps as they change the numbers. It links to Dynamics, so a rep can add recipient information right from the database and track quotes they’ve sent automatically in the customer record.

Leary points out that having a tool like this enables Dynamics to keep up with Salesforce, which bought quote-to-cash startup SteelBrick at the end of last year and Oracle which offers its CPQ cloud product. (Dynamics also supports Apttus, an enterprise configure-price-quote product).

Dynamics CRM currently sits way back in the pack with 4.3 percent market share, putting it well behind Salesforce, SAP and Oracle, according to Gartner’s latest numbers from May this year. 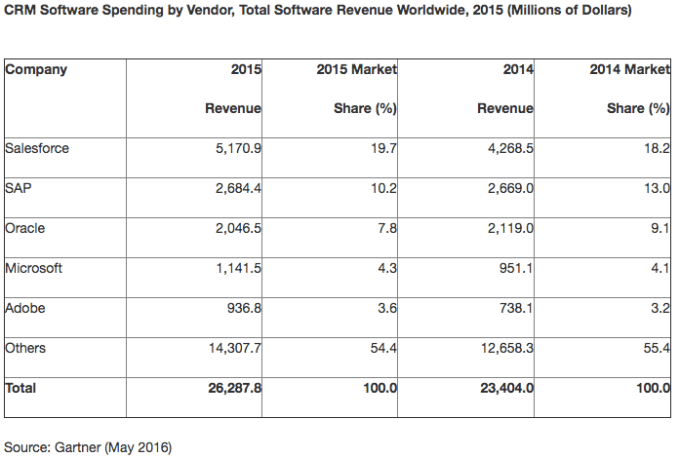 Category leader Salesforce has a healthy lead with 19.7 percent, but 54.4 percent of the market is made up of “other,” slices that are too small to measure. Chances are that means there is still plenty of market left to capture and Microsoft is trying hard to get some of that (but of course so is everyone else).

Leary believes these moves should help increase Microsoft’s marketshare, but it could take some time to have a significant impact. It also depends greatly on how well Microsoft connects LinkedIn with the Dynamics products, but word is they are working on Beta connectors as we speak.