This morning, a friend tagged me on a Facebook post that showed someone hula hooping with her…um, well…her butt. Apparently, he thought this was funny. Thankfully, I have Timeline Review turned on so this kind of content doesn’t immediately appear on my profile for all my friends and family to see. In the future, however, my friend might have a different option for alerting me to posts they want me to see without the potential fallout from this sort of Timeline spam. Facebook has confirmed it’s testing a “more discreet” option for sharing posts with friends via Facebook Notifications, the company says.

The test was first spotted by SocialTimes, when a reader sent them a photo (see below) of a new option that appears when you’re creating a post on Facebook. This option reads “Notify a few friends about this post” and includes a small icon of a megaphone.

Instead of tagging friends in the post or in the comments section, you can click this new link, then choose those friends you want to alert. This will send them a notification as before. But, unlike with being tagged on posts, the content isn’t directed to your profile page where it either goes live or into moderation, depending on your privacy settings. 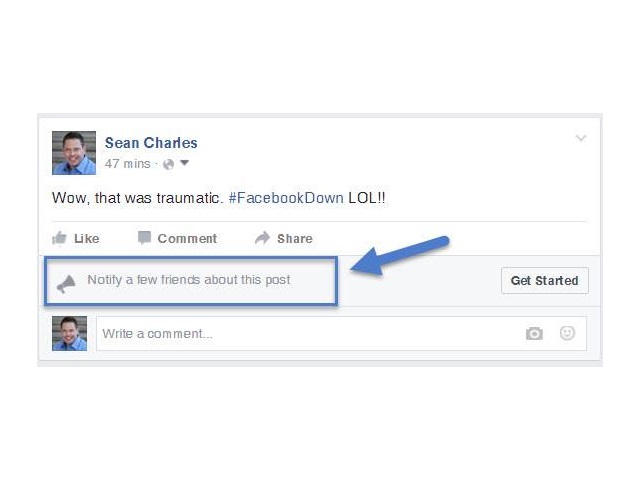 Meanwhile, by eliminating the need to tag friends in the post comments – something that’s often done when you find something you want to share with a specific friend, such as an event announcement, for example, or a news item – the comments section will be cleaned up, too.

That will make it easier for people to actually have conversations around the topic at hand, as opposed to having to read through a stream of tags where people are telling their friends to look.

Facebook confirmed the test, but didn’t say when or if it would be launching publicly.

However, we understand that it’s currently being trialed with a percentage of users in Canada, the U.K., and France on both iOS and the web. (Unfortunately, that means I won’t be opted in to this trial anytime soon. Timeline Review continues!)

Of course, Facebook tests many things that never roll out to its entire user base, but this feature has promise. It addresses an annoyance with the way Facebook operates today – that is, people have to tag you to get your attention. More direct alerts would be far better for the recipient, though this feature does require the poster to play along, too. And if tagging remains the easier, more obvious option, they may simply choose to ignore this feature in favor of the familiar. But that’s what these tests will determine.

A Facebook spokesperson confirmed the test with us, via the following statement:

“When you make a post that is particularly interesting to certain friends – you want to make sure they see it. Instead of tagging friends in the post or the comments section, you will now have a more discreet option to alert them of your post by sending them a notification.”