How do big businesses optimize IT-driven processes? Often by hiring management consultants to cast an expert eye over digital traceries and deliver recommendations for improving core operations like logistics and production.

But Munich-based B2B SaaS startup Celonis reckons software can do a better job of flagging up areas where there’s room for business optimization.

Its software integrates with around 60 existing enterprise-level business management IT systems — including systems from SAP, Oracle, Microsoft, Salesforce.com and ServiceNow — processing customers’ data in real time to generate recommendations for enhancing business performance. It can also plug into legacy systems, typically using a partner company to do the implementation in those instances. The only requirement is that a customer is using IT systems to manage their business processes.

Celonis describes what its software does as a new sub-set category of big-data mining, called process mining. “It’s a new kind of big data analytics,” says co-founder and CEO Alexander Rinke. “We didn’t invent it, we just found out about it very, very early.”

One example he gives of the kind of business process intelligence it is generating for customers could be that sending a particular standard customer service response frequently results in callbacks — therefore implying the answer is not clear enough and that process needs to change.

Celonis customers are also using the tool to optimize procurement processes — perhaps identifying invoicing problems with particular vendors, or problems with outsourcing costs in particular locations. Accounting, customer service and e-commerce are other areas of focus for applying the tool, he adds.

“What we do is we figure out these are the processes, these are the orders which went well. And then these are those that took longer, which had more interactions — so more people worked on it etc. So what’s the difference in the structure? Is it the vendor? Is it the customer? Is it the branch office? Is it the country that produced the goods?” he says.

“In order to point the company to — out of these 15 million cases [for example], these are the five areas where you can improve. Because we see a  big number of transactions going the wrong way.”

Celonis claims it’s been able to improve operational efficiency for its customers by between 20 and 30 percent. It trains its customers to use the tool but is not offering consulting services on top of its SaaS — rather, it delivers them with the software that generates a dashboard view of how their business is functioning so they can figure out what to do to improve overall business efficiency. The tool also provides a sub-set of focus area recommendations, based on the data it has crunched. 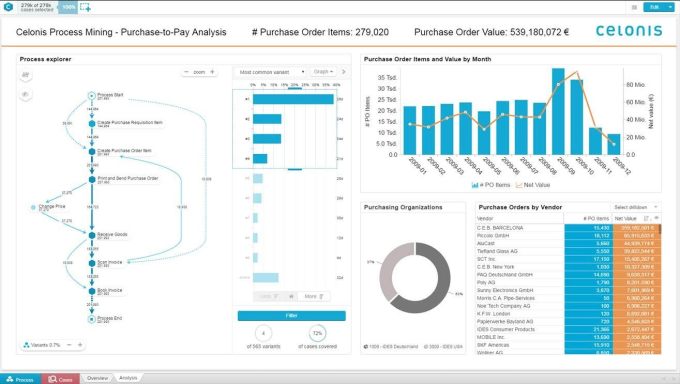 “Supply chain is [another] big area,” adds Rinke. “It depends a little bit on the industry but I would say supply chain, production, procurement. I would never have believed before starting this how big of an issue the whole procurement operation is, especially for larger companies.”

Celonis was founded back in 2011 after the three co-founders, who met at the Technical University of Munich, had been working on a university project with a local media company that wanted help optimizing the efficiency of its IT help desk operation.

“They gave us the data. All the logs, everything, and said… okay tell us how to improve. What we did is we used visualization technology, we used data mining technologies, we used everything we could find on the market to crunch this data — and what we really missed out on is okay we have 20 teams in this IT service operation, how do they work together, where are they losing time… We lacked a real insightful analysis of the process,” he says, explaining how the idea for the startup was born.

Fast-forward to today and Celonis has more than 200 customers across 15 industries in 25 countries — including global Fortune 500 companies such as Siemens, KPMG, Deloitte, Bayer and Vodafone, plus a range of mid-sized customers. Last year it also signed a global reseller agreement with SAP, which is combining its process mining tech with its own in-memory database, SAP Hana.

“There will be some projects they won’t do anymore because we can automate so much of it,” he suggests. “However there will be new things that they will do — probably even more. We are even collaborating with some, so have a lot of the consultants, like Deloitte, KPMG, Roland Berger, McKinsey, are even our customers. And use our product.”

Areas where Celonis’ software can’t help business efficiency are aspects of a business where there’s no step-by-step IT process involved, such as creative processes. “Everything where it’s rather creative than transactional” is how Rinke sums up what’s outside its reach.

“I wouldn’t say that we replace anything, I’d say that we give customers new possibilities — it’s like before you used Google, you went into a library. But Google doesn’t really replace the library… it just offers you a new way to get information. And what I like to think of Celonis is we offer companies a new way to understand how they can improve,” he adds.

Celonis been revenue-generating and profitable for multiple years — although it’s not breaking out revenue at this stage (but will say it grew around 4,000 percent over that period) — but is now announcing its first external funding, pulling in a $27.5 million Series A round led by Accel and 83North.

It’s planning to use the financing to ramp up its operations in markets such as the U.S. Its main markets at this stage are Germany and Europe, according to Rinke, with what he dubs a “growing presence” in Benelux and the U.K.

“Especially in the US we want to invest a lot in building the market out there, and also making our technology even better and growing the value for our existing and new customers even further,” he tells TechCrunch. “Our main focus is really creating the category and building our marketing and sales operation worldwide.”

So why take VC funding now, having successfully bootstrapped the business to profitability since 2011? Rinke flags up what he dubs the “important opportunity” to get expertise and knowledge from the investors in question on scaling an enterprise tech company globally as one key motivation, along with eyeing the wider opportunity he believes is accelerating down the process mining pipe.

“We grew 4,000 percent in the last four years, and are very profitable, so we could have continued that path however we think that this funding provides us with two things: 1), a lot of expertise, because the investors have repeatedly been involved in companies that became pretty big and went IPO,” he says, adding: “The second aspect is we believe it adds a lot of strategic flexibility and we see… the virtue of process mining accelerating a lot.”