Skillz quietly brought Mooney on in February this year. Earlier, at EA Mobile, he managed teams that were responsible for games in the Simpsons and Star Wars franchise. And before that, he worked at Zynga and Lucas Arts’ games divisions.

Mooney spoke with TechCrunch about his vision for Skillz, and why e-sports is changing everything about video games. 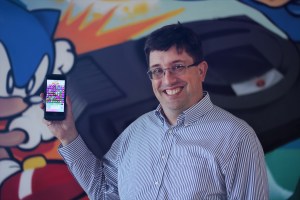 You were working on some choice titles at EA, with Star Wars Galaxy of Heroes under your management. What made you want to leave for a startup?

If you stay in this industry a while, you see that gamers are always kind of evolving their behavior.

When I was at Zynga we were able to win casual game players over, turn them into hardcore players, tapping into a massive audience on social. Would you believe that people got married after they met through a clan playing Mafia Wars?

More recently, streaming started to turn hardcore gaming into more of a community thing than it had ever been before. I think competition is going to make it even more so, and wanted to be part of this new evolution.

How do you think e-sports will change the video games industry?

At least a fifth of people who play video games want to do so with other people, and making a game tournament-playable for points or cash lets them do that.

Probably the most important effect of e-sports becoming more mainstream — it will get people to play a game not just until they finish it, but to get better at it, and keep playing with a community of friends they know from life on or offline.

Massively multi-player games have been around a while. Why do you feel like “community” is new with the advent of e-sports and popularity of streaming?

Right now, when you think of e-sports you think of classic games like League of Legends, Call of Duty or Starcraft. And you think about elite gamers who play against each other, and form tournaments for prestige, rankings and prizes.

But we talk about this all the time at Skillz. There are only 450 NBA players, but tens of millions of people who play basketball in the US.

So many people watch football, soccer and basketball, and love it, probably have leagues, but obviously not as many are professionals like elite gamers in e-sports.

E-sports is starting to bring new people into the fray, while turning people who might play occasionally into hardcore gamers.

How do you see Skillz helping gamers or the industry to thrive?

Skillz is making e-sports happen for the other 99 percent. We give companies infrastructure so that any one of their games can be put into a tournament, and streamed. And we provide high quality competition around games.

For the gamers, we’re there to enforce fair game play, a kind of digital referee. If you used Skillz for a multi-player tournament for Tetris, we’d make sure competitors get the same pieces falling in the same places. They’d be playing the exact same game.

We also match people with someone at their level. We don’t want gamers getting crushed or being bored because they’re so much better than their competitors.

Can Skillz tech work in interactive entertainment more broadly, like to run competitions in VR environments, or to run robotics competitions?

We think of ourselves as the “fair tournament tech” platform. Nearer term, we expect to see major e-sports tournaments coming up around titles that haven’t been played this way before whether that’s Word With Friends or something else.