It’s been almost five years since we heard that “software is eating the world.” The number of SaaS applications has exploded and there is a rising wave of software innovation in the area of APIs that provide critical connective tissue and increasingly important functionality. There has been a proliferation of third-party API companies, which is fundamentally changing the dynamics of how software is created and brought to market.

The application programming interface (API) has been a key part of software development for decades as a way to develop for a specific platform, such as Microsoft Windows. More recently, newer platform providers, from Salesforce to Facebook and Google, have offered APIs that help the developer and have, in effect, created a developer dependency on these platforms.

Now, a new breed of third-party APIs are offering capabilities that free developers from lock-in to any particular platform and allow them to more efficiently bring their applications to market.

The monolithic infrastructure and applications that have powered businesses over the past few decades are giving way to distributed and modular alternatives. These rely on small, independent and reusable microservices that can be assembled relatively easily into more complex applications. As a result, developers can focus on their own unique functionality and surround it with fully functional, distributed processes developed by other specialists, which they access through APIs.

Developers realize that much of the functionality they need to build into an app is redundant to what many other companies are toiling over. They’ve learned not to expend precious resources on reinventing the wheel but instead to rely on APIs from the larger platforms, such as Salesforce, Amazon and, more recently, specialized developers. We’re still in the early innings of this shift to third-party APIs, but a number of promising examples illustrate how developers can turn to companies such as Stripe and Plaid for payment connectivity, Twilio for telephony, Factual for location-based data and Algolia for site search.

Indeed, the area is booming. On last check, ProgrammableWeb was providing searchable access to almost 15,000 APIs, with more being added on a daily basis. Developers can incorporate these APIs into their software projects and get to market much more quickly than going it alone.

While getting to market more quickly at a lower cost is a huge advantage, there is an even more important advantage: Companies that focus on their core capabilities develop differentiated functionality, their “secret sauce,” at higher velocity.

The benefits for the rest of the software development ecosystem are profound.

Another advantage is third-party APIs are often flat-out better. They work better and provide more flexibility than APIs that are built internally. Companies often underestimate the amount of work that goes into building and maintaining the functionality that they can now get as a third-party API. Finally, third-party API developers have more volume and access to a larger data set that creates network effects.

These network effects can manifest themselves in everything from better pricing to superior SLA’s to using AI to mine best practices and patterns across the data. For example, Menlo’s portfolio company Signifyd offers fraud analysis as an API. They aggregate retail transactions across hundreds of companies, which allows them to understand a breadth of fraud markers better than any individual customer could.

A new breed of software companies

Releasing software as an API allows those companies to pursue a number of different adoption routes. Rather than trying to sell specific industry verticals or use cases, often the customer is a developer, leading to an extremely low-friction sales process. The revenue model is almost always recurring, which leads to an inherently scalable business model as the end customers’ usage increases. While the ecosystem of API-based companies is early in its evolution, we believe the attributes of these companies will combine to create ultimately more capital-efficient and profitable business models.

This opportunity is not limited to new upstarts. Existing developers may have the opportunity to expose their own unique functionality as an API, morphing their product from application to platform. Some outstanding companies have built API businesses that match or exceed their original focus: Salesforce reportedly generates 50 percent of its revenues through APIs, eBay nearly 60 percent and Expedia a whopping 90 percent.

The model is attractive to entrepreneurs and investors. Rather than trying to create the next hot app and having to invest heavily in marketing and distribution before validating scalable demand, it may make more sense to build a bounded set of functionality and become an arms merchant for other developers.

The API model creates a compelling route to market that if successful can scale capital efficiently and gain a network effect over time. Currently, there are 9 million developers working on private APIs; as that talent sees the opportunity to create companies versus functionalities, we may see a significant shift to public API development (where there are currently only 1.2 million developers).

This enables new types of competitive barriers, as in Twilio’s ability to negotiate volume discounts from carriers that no individual developer could obtain, or the volume pricing that Stripe enjoys by pooling payments across many developers. Companies like Usermind (a Menlo Ventures portfolio company) show great promise in allowing enterprises to move beyond their single-application silos by creating workflows and simplifying the API connections between their existing SaaS applications.

While the ecosystem for API startups is attractive today, we believe it will only become stronger. Over the last five years there’s been a broadening of interest in enterprise-oriented technologies like SaaS, big data, microservices and AI. APIs are the nexus of all four of those areas.

As the world of enterprise software development further embraces third-party APIs, we expect to see a number of large companies emerge. The low-touch sales model, recurring revenue and lack of customer concentration lead to a very attractive business model. In addition, the benefits for the rest of the software development ecosystem are profound, as app developers can focus on delivering the unique functionality of their app and more quickly and less expensively deliver that ever-important initial product. 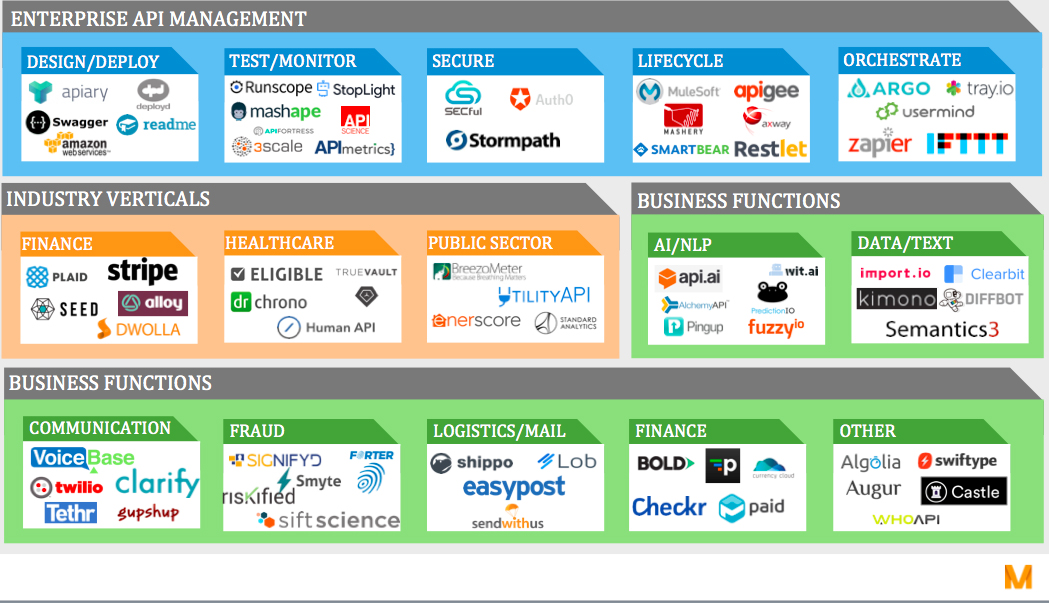