In the world of kitchen appliances, everyone wants to be the next Keurig, it seems.

First, there were single-cup coffee brewers that followed and claimed to be better than Keurig, from Nespresso, Mr. Coffee and Lavazza to name a few.

Later came cold drink machines like the Bartesian for cocktails, or PicoBrew for craft beer. And most recently, the Juicero cold press juice machine promised to save us all the pain of chopping and cleaning up our own organic fruit.

Now chai is having its hardware moment with a new appliance called the Chime by Camellia Labs.

Camellia Labs, founded in 2014 by CEO Guarav Chawla and Samip Bhavsar, recognizes that coffee isn’t king the world over. In India, chai is a daily or even five-times-daily ritual for most families, Chawla explained. But making chai the standard way entails a lot of waiting around for milk to boil, yet not boil over, and waiting for the right flavors to be extracted from various spices and black tea. It also leaves brewers with a sink full of spent leaves.

Camellia Labs created a single-cup brewer for chai, and sees a huge potential market in the South Asian diaspora in North America. Eventually, the startup wants to get everyone hooked on chai.

Real chai is a completely different thing than the watery imitations and sweet, boxed or powdered mixes that pass for a chai or chai latte at most U.S. coffeeshops, including Starbucks, the cofounders said.

The cutely-named Chime, which is about 14-inches tall, includes a spot for the company’s recyclable tea capsules, and a separate tea boiler and milk carafe. It promises to brew a cup of authentic chai in 3 minutes.

The Chime is also “smart,” allowing users to adjust their tea to milk ratio, cup size, brew strength and temperature via a bluetooth-connected smartphone and app. Users can keep their preferences as pre-sets. 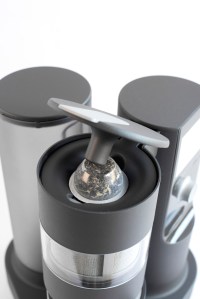 While Camellia Labs is still readying its prototype for manufacturing, it is also developing tea capsules with tea and spice suppliers from India. The capsules contain ingredients like cardamom, ginger, rose and masala, traditional chai ingredients, and retail for $1 a piece, a source of recurring revenue for the company on top of hardware sales.

Part of the YouWeb 9Plus incubator, Camellia Labs made its Chime available for pre-order this week at BrewChime.com, promising to ship to customers by early 2017.

Early-bird customers will pay $249 for a machine in total, including shipping and 60 “Chime Caps” of tea and spices.

The company intends to sell the Chime at retail eventually for about $400 the co-founders said.

Asked if he worries about adding waste to overflowing landfills by turning chai into a habit that requires disposable capsules, not just looseleaf spices and teas, Chawla, the company’s CEO, said environmental sustainability remains an ongiong concern.

Camellia Labs is constantly evaluating new recyclable or compostable materials that could work in their machine, he said.