Highway1 is a rare breed of accelerator that has realized the companies that most need help are the folks who are doing the startup thing with hardware products. In the final-version-is-final world of hardware startups, the companies passing through the accelerator are facing some of the biggest challenges in the startup world today. Here’s a salute to the teams that survived the Highway1 summer 2016 program…

Okio is creating wrist-wearable comms tools for kids. It’s so clever it hurts.

If you have kids, you’re facing a challenge: Do you give them a mobile phone (with all the negative aspects that brings), or do you not? Okio falls in between, creating a communications device that is an awful lot like a phone, but much simpler, and far easier for kids to get their head around. Okio creates age-appropriate communication devices for parents to stay in touch with their children; it’s a simple voice messaging tool utilizing a smartphone app and a discreet device kept by the child. Designed by parents to fit into a child’s lifestyle, Okio is a unique wearable that is convenient and unobtrusive for children ages 5-12.

I think Okio would really have to try hard to fail: They’re filling a gap in the market that hasn’t been properly addressed, and it feels like Okio have a product that parents have been clambering for a long time; it strikes the perfect balance between communication and letting your kids do their own thing, and having a way of communicating important messages without interrupting your kid in class seems like a no-brainer. If you’re looking to invest, this is my pick of the bunch. 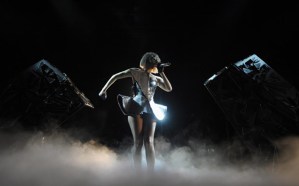 Hiding behind the genuinely an un-googleable (and therefore terrible) name, XO has a fantastic idea with the execution skills to match. The company aims itself at the fashion-conscious ‘gen Z’ 10-to-25-year-old consumers who have a passion for fashion and tech, hoping to merge the two. The company has an incredible track record, working with icons like Lady Gaga, Arcade Fire and the Black Eyed Peas, having been featured on stage at the Grammy awards. At the demo day, the company announced that they signed up Lady Gaga as an advisor to the company.

I think the company has created a perfect storm of fashion and tech that is just itching to go mainstream viral. The company has built a platform to make it easy to create wearable technology clothing items at an affordable price point, and it’s easy to imagine high-street brands embracing its tech in huge marketing campaigns. If the company can get its messaging right and market its products in the right way to the right people, they’re going to make it huge.

Blümio is a tremendously interesting startup that is trying to shake up the way blood pressure monitors work by adding a stick-on monitor using radar technology rather than an inflatable cuff. The company makes it possible to monitor a person’s heart health throughout the day.

I think Blümio has positioned itself in a tremendously competitive market, but with a potentially huge pay-out at the end — heart health is a big topic, and while their technology still has a lot of challenges ahead of it before it’s ready for prime-time use, it’s definitely one to keep an eye on if you’re a medtech investor or medical device manufacturer.

If the TV show Silicon Valley is to believed, every company wants to change the world.Sensassure didn’t mention that in their post (thank god), but that may just be the path they’re on. The company is tackling a challenge in senior care — specifically, with its Talli product, taking on the challenge of incontinence in elder care. Talli is a reusable sensor that sits on the outside of incontinence product, which wirelessly alerts caregivers when wetness is detected. In essence, it tells nurses when it’s time to change a diaper. It’s a huge market worthy of disruption. The team deserves a mention for its dedication, too: They’ve been living in nursing and care homes for the past year, to really get on the pulse of the challenges that this market is facing.

I think Sensassure has a bright time ahead of it. It’s solving a very real — if not very sexy — problem in an industry that is both well-funded and desperately overlooked from a tech point of view. The company is certainly facing an adoption challenge, but it does find itself in the enviable position of being both needed and in a space where acquisitions are many and frequent. I’d be surprised if the company wasn’t facing a bright future.

Aiming squarely at the always-worried-parents market, Cocoon Cam is a wellness camera and software platform that provides real-time insight on the safety and well-being of your baby. The company is able to detect heart rate, respiration and skin temperature of a newborn, all without having to attach scary medical sensors to the child.

I think the company taps into a world of fears for first-time parents, which may just be enough to become a successful business. The company has shown tremendous hustle — including appearing at the White House to demo their product to the First Family of the United States — and is tapping into a staggeringly huge market. The team gets what’s at stake, and I’d be surprised if the company didn’t make a huge impact in the world of Tiny People Tech. Interestingly, the tech can be used beyond baby monitoring, too; the company showed off how they were able to detect signs of life on a sleeping inmate, which sparks some real inspiration; the technology can be used in all sorts of contexts.

Coming slightly out of left field — or is that a reference to a different sport — is Courtmatics. The company is aiming to help athletes up their game. The first sport they’ve aimed their wizardry at is tennis, with a in-racket (!) Internet of Things device in the form of a ‘smart dampener’ to help coaches and players improve their game. The product tracks gameplay and streams data to a mobile app, where players can see their strengths and development areas.

I think the product is more niche than some of the other ones presented today, but with “tennis players” as their audience, it’s certainly aimed at a generally affluent audience willing to spend the money. More interestingly, the company is aiming at a much broader audience than just tennis. Its name — Courtmatics — may just hold it back in its mission, but look beyond that, and you may just have a winner on your hands.

If you’ve ever wished that bicycles had a common operating system, OpenBike is about to become your best friend. OpenBike is a connected bicycle ecosystem empowering the next generation of bicycle technology through an on-bike hardware product and software solution. One shared battery powers all accessories on the bicycle, charging your lights, your phone and other connected accessories. The platform enables interoperability between components, enables new features and integrates the hardware with apps and services in the cloud.

I think cycling is becoming a bigger part of our urban lives, and having a smart bike makes an awful lot of sense. The company is working with Marin bikes to create a series of prototypes, and it’s easy to see how a more in-depth partnership might just leap-frog the competitors to market. I remain to be fully convinced that a bike really needs to be part of the Internet of things, but there’s no denying that there’s plenty of cyclists who are willing to spend real moolah on their two-wheeled friends — and OpenBike may just kick open the door to a big change in our ideas about what a bike ought to have in its accessory package.

If you’ve ever found yourself thinking that VR isn’t reality-like enough, OBE by Machina — where OBE is short for Out of Body Experience — might just have the answer. The company has found a way to blend the digital and physical worlds to create an immersive gaming experience. The company’s first product enables users to feel and control virtual reality worlds. The jacket seamlessly integrates motion sensors, directional control and full-body haptic feedback into a single garment. In short, it’s some truly sexy shit, and Samsung seems to think so, too; they ordered 500 of the OBE jackets for trialling and demoing in its retail stores.

I think OBE solves a problem I can’t really relate to; yes, haptic feedback seems like something that should exist, but I can’t really say it’s something that’s been missing from my life. They’re hoping to pair the experience with entry-level VR experiences like Samsung Gear or Google Cardboard, and I just can’t really see how there’s a need in this market for something like OBE — but, having said that, it’s cool enough that I’d be delighted to be proven wrong.

The team behind Calliope is trying to bring the Internet of Things to your water usage. The company’s first product is Buoy, a connected water meter that gives homeowners real-time information about their water use, with a remote shut off in case of emergencies. Water consumption data is presented with actionable insights and notifications in a user-friendly app, enabling homeowners to achieve up to 20 percent reduction in water use, without a huge impact to their lifestyle.

I think Calliope is thinking along the right lines, and that a big utilities provider may just see the need for the product in the marketplace. Having said that, they currently aim their product at consumers. To the utility companies, this may be a problem worth solving, but I have a hard time believing they’ll be able to find enough customers who care enough about the problem to build a viable business in the B2C space.

Not one to waste any time, Highway1 is sending the hopeful companies into the world to spread their wings and do their things, and at the same time opened applications for the next Highway1 cohort. If that sounds like your sort of thing, get your applications in now.