Mobile apps often provide a better user experience than browser-based web apps, but you first have to find them, download them, and then try not to forget you installed them. Now, Google wants us to rethink what mobile apps are and how we interact with them.

Instant Apps, a new Android feature Google announced at its I/O developer conference today but plans to roll out very slowly, wants to bridge this gap between mobile apps and web apps by allowing you to use native apps almost instantly — even when you haven’t previously installed them — simply by tapping on a URL.

Typically, downloading and installing an app would take a while, but with Instant Apps, developers will have to partition their apps into small, runnable parts that can start within a few seconds.

“Instant Apps is really about re-thinking where apps are going,” Google VP of Engineering for Android Dave Burke told me. The idea behind Instant Apps is to make the native app experience as convenient as surfing to a web site. “Web pages are ephemeral,” he said. “They appear, you use them, and never think about them again.” Apps, he argued, have lots of friction and often you only want an app to perform one action or to get a specific piece of information. 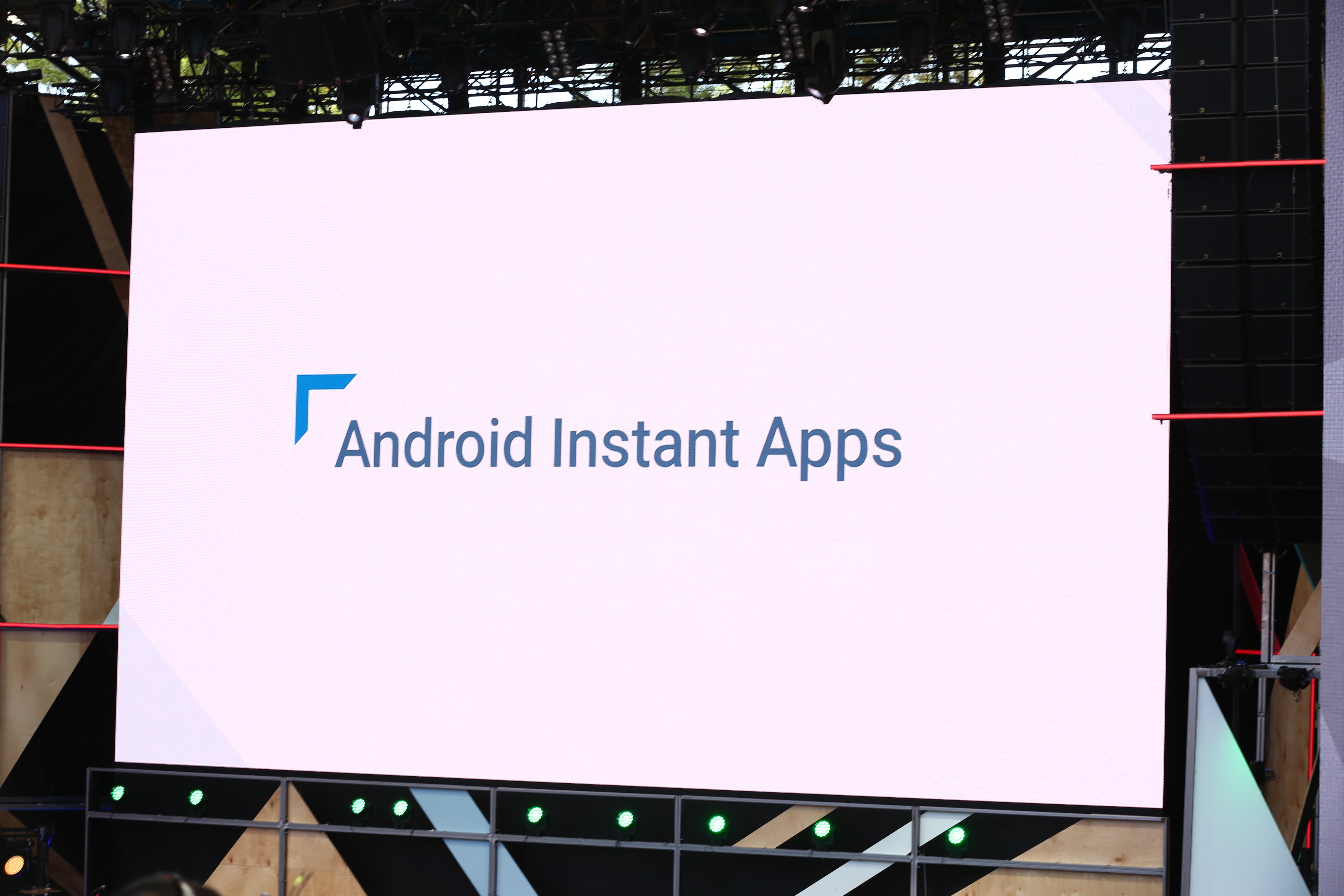 As Google’s Michael Siliski and Ficus Kirkpatrick told me, the idea here is to allow a mobile experience to start in about the same time it would take to render a standard mobile web page. While the team is still working out the limits, Siliski and Kirkpatrick expects downloads for Instant Apps to clock in at under 4 megabytes.

Here is what that would look like in practice: say you are in a new city and want to pay for parking with whatever parking app the local municipality is using. You hold your phone to the parking meter, the built-in NFC chip reads the info, and the native app appears almost instantaneously. There is no need to download the app or even log in (or to uninstall it later).

The focus here, they argued, is on making the experience as seamless as possible. Because you’re already logging in to your phone, the app will allow you to pay with your Google Wallet account and then disappear again, for example. “There are classes of apps that are better as a native app but aren’t being experienced like this because of the install hurdle,” Siliski said.

Google also worked with BuzzFeed on an early test that lets you open up an instant version of the Buzzfeed Video app to watch a video, and with B&H to show how developers could use this feature for an ad hoc online shopping experience.

Developers will have to do some work to enable all of this new functionality, of course. Kirkpatrick noted that this is more of an upgrade to an existing app than a complete rewrite, though. They can still use the same source code and some developers may be able to implement Instant App support in as little as a day (assuming they have a very basic app, of course). 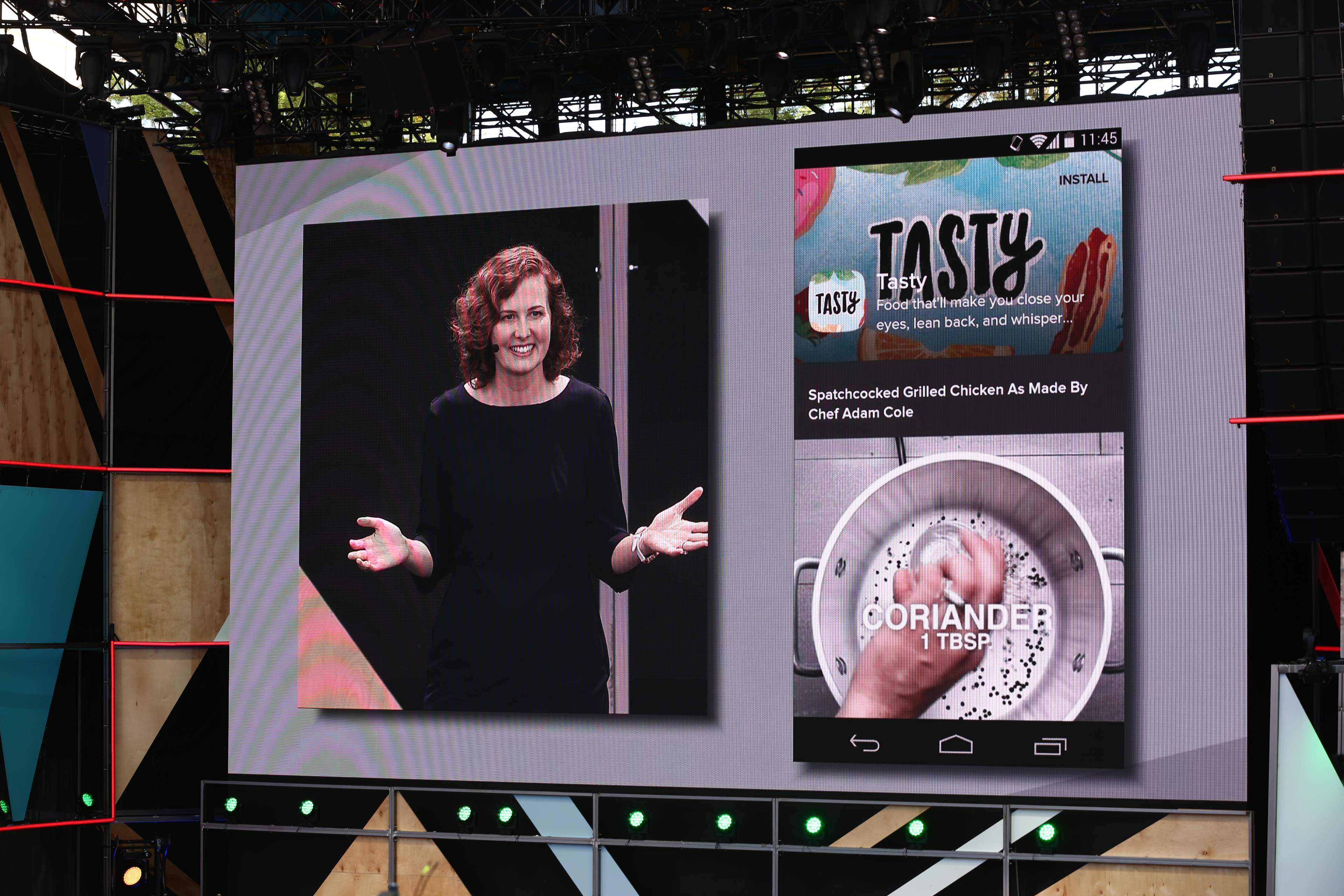 Apps will run in a secure sandbox and that this feature, once released, will work all the way back to Android Jelly Bean.

Burke connected the idea behind this new kind of app with the current hype around bots. They, too, promise to make it easier to perform some actions without having to install a new application for each task. As Burke argued, though, bots aren’t really all that convenient in practice (yet) given that you have to go through multiple steps and maybe type a bunch of sentences to get anything done. Instant Apps, he said, gives you “the good stuff from bots without the negatives.”

It’ll likely be a while before you’ll see any Instant Apps in the wild, though. Google is announcing this feature today to gather input from developers. It has already worked with a few early testers and the team feels it’s ready to provide today’s sneak peek at the functionality. The capability to use Instant Apps will roll out to users later this year and Google plans to expand the set of developers with access to this feature over the course of next year.

Why so slow? The company argues that this is a tricky feature to get right. “There are a lot of changes to the developer experience and we want to make sure we get this right,” Siliski said.

Google in the past has experimented with a number of ways to bridge the gap between the web and native applications, including surfacing content from Android and iOS apps in search and even streaming virtualized apps from the cloud. But Instant Apps is about making it more seamless and natural to download then use real, native applications.

The move comes at a time when the app stores are overrun with content, and consumers are becoming less inclined to seek out and try new applications. A 2015 study indicated that consumers spend 85 percent of their time on smartphones using apps, but only use a small handful of third-party apps on a regular basis.

This shift in consumer behavior means that it’s difficult for developers to get their app onto users’ devices – something that Instant Apps could help to address, if implemented correctly.