Slack is pushing to become the identity layer for all enterprise apps.

The workplace chat app has already captured the eyes, minds (and wallets) of the tech world with its deceptively simple, zippy platform for people to communicate and collaborate with each other on projects. One of its chief hooks is the ease with which you can integrate lots of different apps so that you can communicate about work within each of them all in one place.

Now Slack is colonizing the enterprise landscape beyond the walls of its own app. Today, the company is unveiling a new feature called “Sign in with Slack” — which will let Slack users sign into and use other apps using their Slack identities. 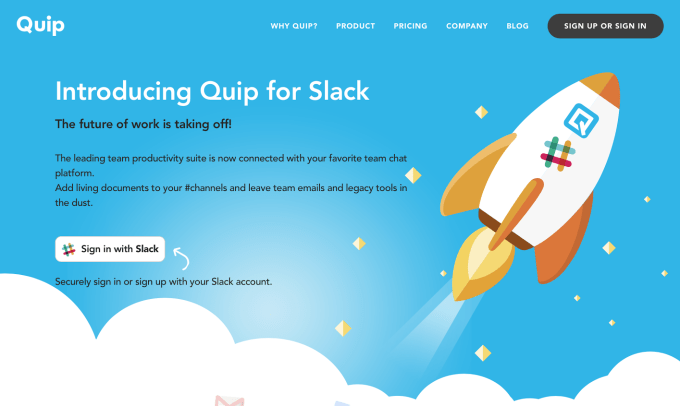 “Sign in with Slack” could turn Slack into the identity provider for the enterprise. Rather than having to remember a login and password for every different workplace app, you’ll be able to just use your Slack login.

The move takes advantage of the fact that everybody in a company needs chat. While other workplace apps might only be necessary for certain departments, messaging is the thread that ties a business together. As we’ve been writing about since last year, that ubiquity within a company and the fact that it’s constantly used throughout the day primes Slack to be an identity layer.

You can think of it as Slack’s answer to Facebook’s Connect (now called Facebook Login), and perhaps more to the point of Slack, a sign that it’s continuing to make advances on how to turn its platform into its own formidable social networking platform for businesses. (Watch out, Facebook @ Work?)

The feature is launching today with several key partners. They include the cloud-based word processing and collaboration app Quip, Figma, Kifi, Officevibe, Smooz and Slackline. 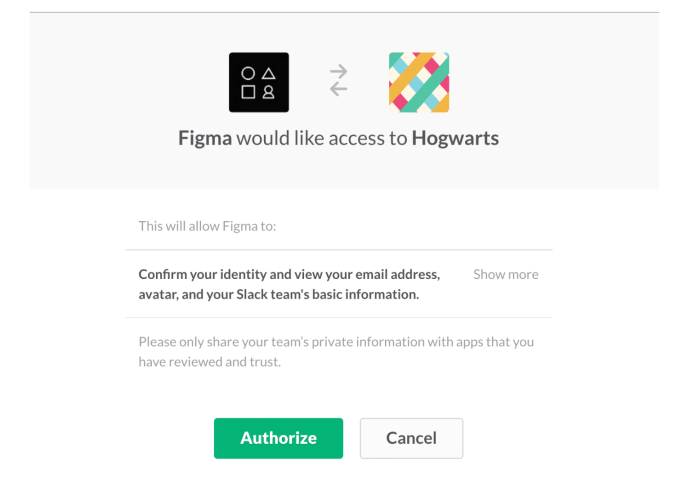 Quip is an especially poetic coincidence, considering the startup was co-founded by the former CTO of Facebook, Bret Taylor, and counts Facebook among its earliest and biggest customers. It’s also been the subject of a number of tips we’ve received, where anonymous sources claim that Slack is buying the startup. For what it’s worth, though, we’ve heard these are just rumors, likely coming out of the fact that Quip has been visiting Slack a lot in the lead up to this announcement, working on the integration. We’ll see if that remains the case, though.

Indeed, while Quip is using the new sign-in feature, it’s also adding a much deeper integration. “We always wanted to integrate more deeply with Slack because our products are used together by so many of our customers — especially in media and technology,” Taylor told me. “The two together represent the way modern teams are productive without email.”

I asked if there is likely to be any conflict of features, or degradation of use of some of the key areas of Quip — specifically Quip’s own communication channel that runs alongside documents. “No,” he said.

“The conversations attached to Quip documents are different than Slack channels,” he said. “They are topical and more often than not embedded in the document itself — a conversation on an item in a project checklist or feedback on a paragraph of a document.” He added that teams tend to use Slack for real-time chat and Quip for writing and project management, and our focus in building the integration was making sure you get notified about changes in those Quip documents in Slack, recognizing that the temporal use case of Slack and more permanent use case of Quip were pretty distinct in practice.

The idea behind Sign in with Slack is interesting. Apps can already integrate with Slack by way of its API. This lets developers create short-cut commands that users can type in to essentially call up content from the third-party app. This is a platform that got a big boost in December when Slack announced a revamp of its developer platform, directory and a new Slack Fund to encourage more apps to be built to exploit the platform.

The new features will turbo-charge this: You will now be able to interact a lot more with the third-party app, adding content in-stream. This will keep people in Slack longer, and make it even more useful for them when working on shorter and less involved updates to those documents. (Recall that Slack’s revenue model is based on usage: you pay more if you use it more.)

But perhaps just as important, it’s giving Slack an identity outside of its own app, with people able to use their Slack IDs to sign in everywhere. 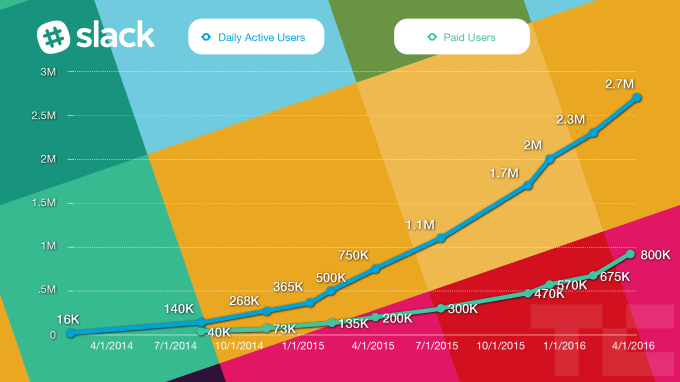 While Slack is small in absolute terms right now, with 2.7 million daily users and 800,000 paid seats, its momentum is extremely strong. Both those figures are up 3.5X in a year.

Competitors are piling into the market, trying to clone Slack’s core features. But it’s much harder to clone a developer ecosystem. By using its early traction, buzz and connections to establish “Sign in with Slack” partnerships with other enterprise apps, it could build a moat against copy-cats. And with each additional app tied to Slack, its engagement and stickiness grows.