When B.J. Novak, best known for exec producing, writing and starring as Ryan on “The Office,” teamed up with Dev Flaherty to create a mobile application that allowed people to create lists and share them with others, they gave it a playfully anti-tech name: “The List App.” But following its late-2015 debut, more than 150,000 users have signed up to create some 250,000 lists on the app, using only their iPhone keyboards. Today at TechCrunch Disrupt NY 2016, the founders announced they’re rebranding the app with a friendlier name by simply calling it li.st. The app is also arriving now on Android, with a web launch soon to follow.

In case you missed it the first time around, the idea with li.st was to offer a simple platform for sharing lists, which could be of anything you wanted — a list of the best restaurants or bars, top travel tips, entertainment suggestions or recollections (like “albums that changed my life”) or even just funny time-wasters.

Lists are not only a popular medium for written content on the web because they’re easy to peruse without feeling like you’re committing to reading a long essay, they’re also ideal for mobile because they can be digested in a brief period of time.

The app’s debut was aided in part by getting a number of notable names on board, including Lena Dunham, Mindy Kaling and Snoop Dogg, along with publishers like The NYT, Washington Post, Slate, The New Yorker, TED, The Onion, PBS, Vox and others.

Having so many well-known accounts to follow initially made people believe the app was an attempt at aggregating high-quality content from around the web for the rest of us to follow — or worse, some thought it could be another example of a Hollywood actor’s attempt to capitalize on fame to establish a presence in the App Store, à la the Kardashians’ mobile empire.

However, li.st isn’t about either of those things. What ended up happening is that the app attracted a community who took to the list-making format as a form of self-expression — something that fit in between the brevity of using Twitter and the sometimes longer blog posts found on sites like Medium. 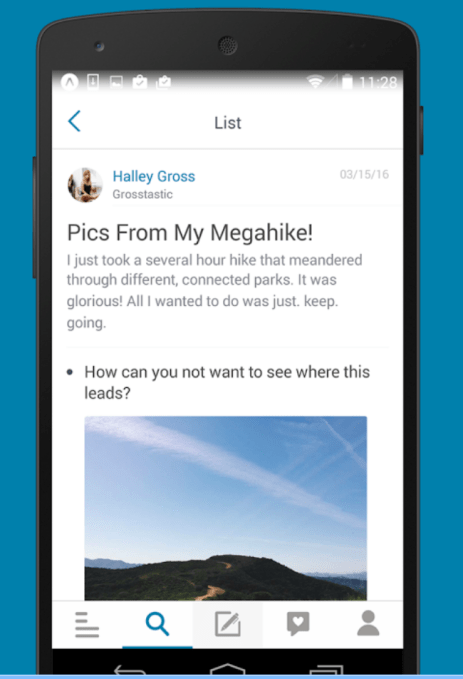 Lists, after all, seem approachable. Ask someone to write an essay about a topic and they balk. But ask them to make a list of superlatives or tips or anything else, and all of a sudden, the ideas flow.

It’s almost as if lists can trick people into becoming writers.

The app, explains Flaherty, lets you write and get your thoughts out without having to worry about the structure of those thoughts.

And by making writing more accessible, the type of content that people share becomes more personal, too. Today, users are sharing things like favorite jazz albums, tips for new grandparents, “being a fat girl in a skinny world” or “names men call me that make me uncomfortable,” for example.

“Self-expression is the core use of this product,” Flaherty says.
“We’ve really tried to embrace the strength of the community. We’re always trying to come up with new ways to get people exposed to new people they might like,” he adds, hinting at the personalization features the team plans to ship in a future release.

That being said, having celebrity accounts on the app is not a bad thing. It gives people interesting content to follow right away.

Celebrity has opened doors for the company, too, Novak admits.

“But at the end of the day, it will not take you the distance,” he says. 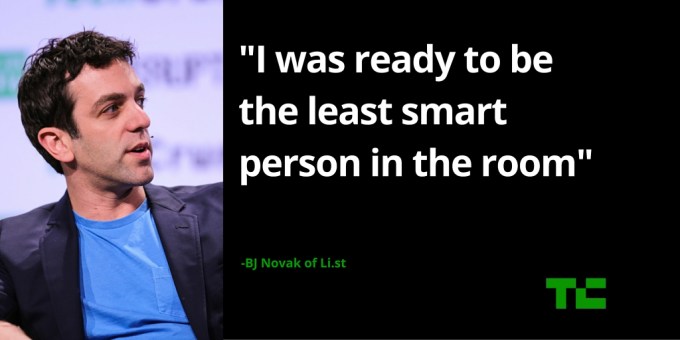 Celebrity didn’t score him his co-founder either, as it turned out. In fact, Flaherty had never watched “The Office” and had to ask his wife who Novak was.

But Novak says he appreciated that Flaherty didn’t treat him like a celeb, but rather a guy with a good idea that wasn’t great yet.

“I was ready to be the least smart person in the room,” he says, of getting into the tech world, which he still — even after being immersed in it for six months — characterizes as “glamorous.”

“Ideas are front and center,” Novak says of the industry. “Being star struck by someone who is actually inventing the future…that, to me, is so much more interesting than someone who has a slightly different take on a horror movie.”

The founders also disclosed they had raised $2 million in seed funding for the app last year.

Li.st’s web version is due in around four to six weeks. This will allow users to type out their thoughts using a computer keyboard, instead of tapping on a mobile phone’s small screen.

However, the new Android version is live today, to complement the previously launched iOS app.