Deep Space Industries, the asteroid mining company, has signed a Memorandum of Understanding with the Luxembourg Government to co-fund the development and launch of DSI’s first spacecraft. Known as Prospector-X, the small spacecraft will test key technologies in Low Earth Orbit that will be necessary for future asteroid prospecting. 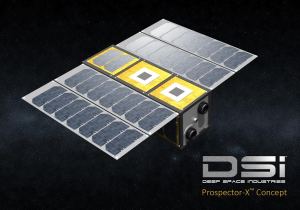 The agreement is a small, but important step toward developing the technologies necessary to enable the potentially very lucrative business of asteroid mining.

“Our promising cooperation with DSI within the spaceresources.lu initiative clearly demonstrates the strong commitment of the Luxembourg Government to support the exploration and future use of space resources.” Étienne Schneider, Luxembourg Deputy Prime Minister and Minister of the Economy

Back in February, Luxembourg became the first European country to announce their intention to establish the necessary legal and regulatory framework required for in-space commercial mining activities. 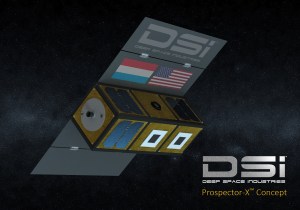 In Luxembourg’s February announcement they mentioned that they were considering investing in already-established asteroid mining companies like DSI and Planetary Resources.

Today, Luxembourg begins a partnership with DSI, and they’re already planning to work with others, stating that “separate negotiations to formalize our relationship with other companies active in this field are underway.”

Planetary Resources seems like a likely contender, considering they already launched their first spacecraft in July of 2015 in order to test their own asteroid prospecting technologies.

DSI, which has an office in the NASA Ames Research park and has worked with NASA through several contracts, will open up a second location in Luxembourg.

While parts of the spacecraft are currently under development, DSI will work with Luxembourg to complete the full system. Prospector-X will be built and tested at both locations. 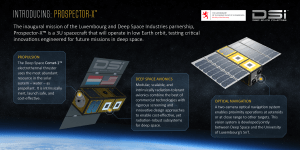 Rick Tumlinson, Chairman of the Board of DSI, told TechCrunch that one of the key technologies that will be tested on Prospector-X is an electrothermal thruster named Comet-1.

While Tumlinson wasn’t giving away many details, he notes that it’s a very advanced type of thruster that uses water as its propellant. He noted that advancing this technology would be of great benefit to the space industry, especially if a company could find a way to harvest water from asteroids.

DSI, of course, hopes to be that company.

In general, asteroid mining involves harvesting resources that will either be kept in space – asteroids could be made into gas stations for traveling spacecraft, for example – or with the intent of bringing these resources back down to the ground to sell on Earth.

“We are going out to places that are dead and deadly, and we’re harvesting the stuff of life so that humanity can go out there and live and explore.” Rick Tumlinson, Chairman of the Board, DSI

For now, DSI is focusing on harvesting water from asteroids for in-space applications like providing fuel for other spacecraft. This activity also ties nicely into their goal of perfecting a rocket thruster that requires water as propellant.

Tumlinson likened their plan to the oil industry saying, “It’s almost as if we were drilling for the first oil and we were developing the internal combustion engine.”

DSI has plans to harvest valuable metals and gasses from asteroids as well.

However, asteroid mining technologies will take years to develop, so deriving revenue from harvested asteroid materials isn’t likely to happen in the near future. In the meantime, DSI plans to make money by selling the technologies and spacecraft capabilities they develop in the process.

“Part of the beauty of what we’re doing is that the thruster and the other technologies and capabilities that we’re demonstrating are applicable to the space market right now.” Rick Tumlinson, Chairman of the Board, DSI

After Prospector-X flies in Low Earth Orbit, DSI plans to launch their next spacecraft, Prospector-1 on a mission to an asteroid. Estimated to launch in four years, Prospector-1 will return information about the asteroid’s composition and what Tumlinson referred to as “diggability” (essentially how easy the asteroid would be to mine).

Down the road, Tumlinson said that multiple Prospector-1 spacecraft could be sent to different asteroid candidates in order to identify appropriate mining locations.

The business of asteroid mining certainly holds a lot of promise. Many asteroids have water ice that can be harvested to create rocket fuel. Others contain useful metals that are considered rare here on Earth. The value of asteroids is unquestionable. Extracting that value in a cost-effective way, however, is the part humanity hasn’t quite figured out yet.

Companies like DSI and Planetary Resources are making the bet that their technologies and business plans will ultimately bring them to the goldmine of asteroids. We’ll just have to wait a awhile to see they’re right.