While there are a number of mobile apps that serve as a panic button of sorts – alerting friends or family when you feel you’re in danger – last year’s TechCrunch Disrupt NY hackathon winner Witness resonated with the event’s audience because it also promised a way to discreetly record incidents of civil disobedience and police brutality at a time when high-profile clashes with police were making headlines.

Today, that app, now called Parachute, is rolling out its first significant update since its 2015 launch. In addition to an expanded feature set, the app also allows organizations to connect with Parachute in order to receive live incidents recorded and shared by end users.

The way Witness originally worked was by allowing users to launch the app and immediately start live-streaming from their phone. This video stream was geolocated and immediately shared with those on the users’ emergency contact list, who were alerted to the incoming video by way of an automated phone call, email and text message.

Plus, when a cell signal was not present, the app would store the footage on the device then send it out when a signal again became available. Once on Parachute’s servers, the data on the phone is wiped. 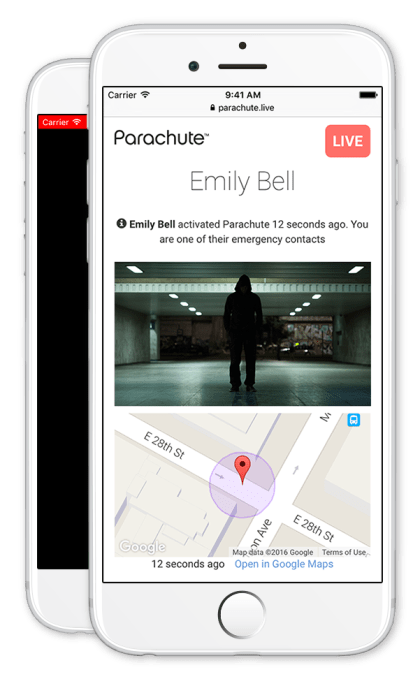 Another notable feature was that the app would black out the screen to allow users to record discreetly – something that could help them in the event of an emergency, an abuse scenario, or when documenting evidence of police brutality, human rights violations, or even just a news event where recording was prohibited.

Because Witness handles sensitive data, it doesn’t look at the incidents recorded unless users request it. But the company says that in some cases, users asked for footage to give to police or lawyers.

But users weren’t the only ones interested in accessing recordings, as it turns out.

Founder Marinos Bernitsas, who left the world of algorithmic trading in New York to focus on building apps, says that since Witness’s App Store launch in July, more than 50 organizations reached out asking if there was a way to receive live Witness incidents from users, and archive that recorded footage for further analysis.

This is now what the Parachute platform aims to deliver. 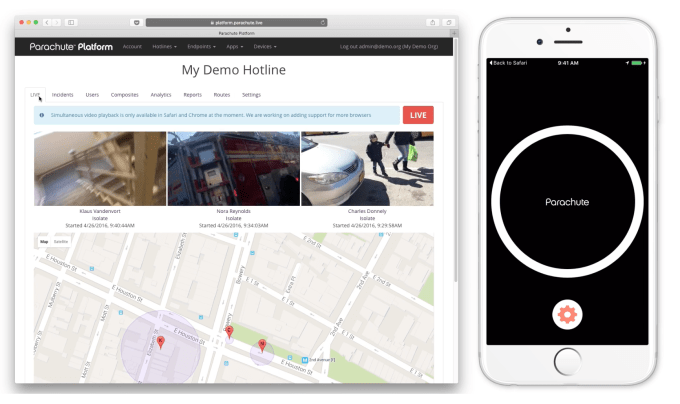 Included in the platform is a live view of active incidents, which resembles a CCTV monitor showing video, audio and location. 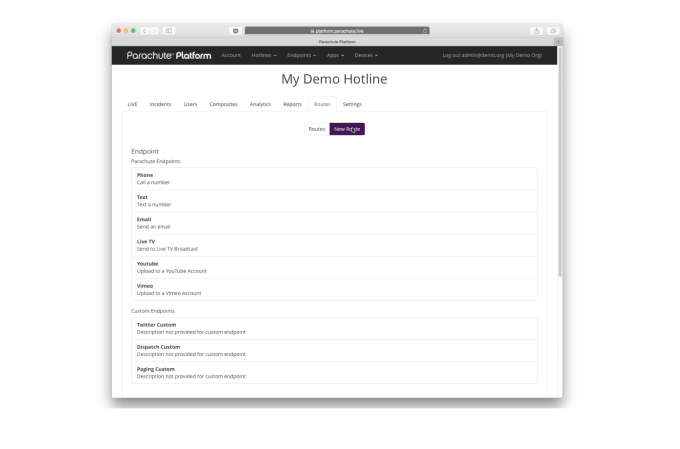 Early testers of the platform include organizations in the safety, healthcare, insurance, news, transportation, and human rights space, notes Bernitsas.

In order to receive these incidents, however, users have to opt to add the organization to their list of emergency contacts by clicking an “Add us on Parachute” link.

This sets up a virtual hotline of sorts which not only alerts the organization by way of emails, calls or texts, but also lets them route the incident to dispatch systems, TVs, social media, and more.

Beyond the launch of the platform, the updated Parachute app today introduces a number of new features and enhancements as well. It now blacks out the screen for discreet recording, but allows you to press on an “eye” button to check on the recording, if need be.

It also identifies altitude (like the floor of the building you’re on) using sensors, includes a better streaming algorithm for low-bandwidth situations, allows you to delete incidents after 24 hours via a link to your email, and includes an iOS widget.

This widget lets you more quickly activate a recording, as all you need to do is press and hold the widget for one second.

Bernitsas tells us that he had been focused on scaling the infrastructure and keeping up with demand, but now that Parachute is live, he’s looking to make growing the team the number one priority.

“We’ve only scratched the surface of what technology can do to make the world a safer place,” writes Bernitsas in a post introducing the new features and branding. “As we head on to our second year, we will keep pushing the boundaries of technology towards our mission to provide the simplest, fastest and most reliable experience in the event of an emergency,” he says.