The U.S. House of Representatives has passed H.R. 699, the Email Privacy Act, sending it on to the Senate and from there, hopefully anyhow, to the President. The yeas were swift and unanimous.

The bill, which was introduced in the House early last year and quickly found bipartisan support, updates the 1986 Electronic Communications Privacy Act, closing a loophole that allowed emails and other communications to be obtained without a warrant. It’s actually a good law, even if it is arriving a couple of decades late.

Representatives used the 40 minutes of debate time on the floor to hearken back to 1986, when “Top Gun” was new and “Cabbage Patch Kids were flying off the shelves.” Times have changed since then, pretty much every legislator explained, and this amendment is “long overdue.”

“Under current law, there are more protections for a letter in a filing cabinet than an email on a server,” said Congresswoman Suzan Delbene (D-Wash.) during the debate period. 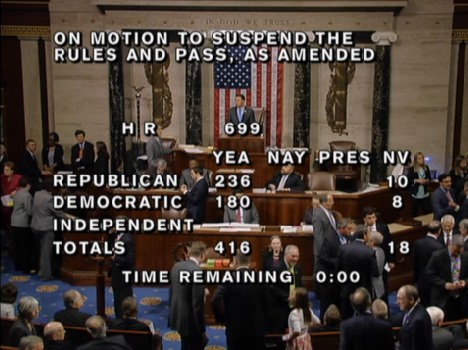 Note: 3 more votes were added to the Yea total after the time ran out, for a total of 419.

An earlier version of the bill also required that authorities disclose that warrant to the person it affected within 10 days, or 3 if the warrant related to a government entity. That clause was taken out in committee — something trade groups and some of the Representatives objected to as an unpleasant compromise.

Compromises, however, make popular bills, it seems: H.R. 699 had a whopping 314 co-sponsors. An oral vote after the debate was all yea and no nay, but the official vote was put off until the end of other business so a proper tally could be done and the broad bipartisan support of the bill put on the record.