Facebook continued its winning streak as other tech companies floundered, reaching 1.65 billion monthly users and surpassing estimates in its Q1 2016 earnings report with $5.38 billion in revenue and $0.77 earnings per share. Facebook’s share price climbed more than 8 percent in the moments after earnings were announced, reaching more than $117 in after-hours trading.

For reference, Twitter was only able to add 5 million users this quarter. Facebook added 12X as many users as Twitter, despite only being 5X its size. 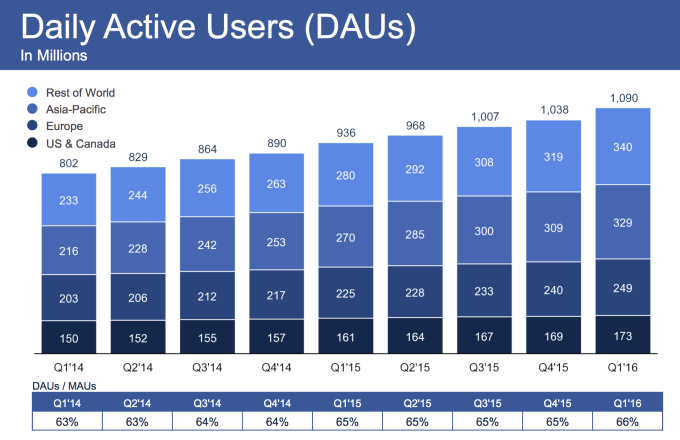 Analysts expected $5.25 billion in revenue and $0.62 EPS, which Facebook handily exceeded. Facebook is also adding a new class of stock to let the public buy in without getting voting rights that could disrupt Mark Zuckerberg’s iron grip on the company’s direction, including long-term bets on artificial intelligence, virtual reality and Internet connectivity.

While many focus on monthly users, Facebook’s daily user count more accurately reflects its health. It reached 1.09 billion daily active users in Q1, compared to 1.04 billion in Q4 2015, up 4.8 percent — even faster growth than its monthly user count. Facebook’s stickiness, its DAU to MAU ratio, grew to 66 percent from 65 percent last quarter, meaning even more of its monthly users access it every day than before.

Overall, Facebook’s family of apps strategy is working. Facebook is now at 1.65 billion users, Messenger has 900 million and Instagram has 400 million. Users of these apps now spend an average of 50 minutes per day on these three.

Slow revenue per user growth in the developing world

One problem spot for Facebook’s earnings was that average revenue per user for the Rest of World region, which includes developing countries where Facebook’s core growth comes from, saw a steep decline.

It fell to $0.91 per user, expectedly down from $1.10 in the Q4 holiday, but also down from $0.94 in Q3. The region’s ARPU was up just 13.75 percent compared to 32 percent worldwide. That indicates Facebook may be adding users in the developing world faster than it’s able to effectively monetize them.

Facebook also said it doesn’t expect to see a material impact on 2016 revenue from virtual reality, including its Oculus division. 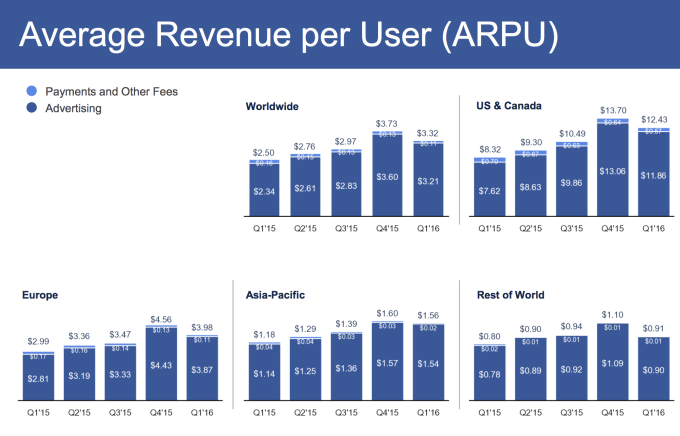 As many users in the developing world leapfrog passed desktop computers and straight to smartphones, Facebook’s mobile-only user count grew to 894 million, up 8.62 percent from 823 million last quarter. While Facebook has hit saturation in some early markets, it’s still growing solidly in the developing world. Monthly mobile users grew to 1.51 billion, meaning 91 percent of Facebook’s users visit on mobile.

While not reported in the earnings release, it’s possible that Facebook Messenger has hit 1 billion users, with that ubiquity helping it box out competitors and the SMS standard. While the company had some trouble with its LiveRail video ad division, it’s still showing strong user growth and revenue momentum in its 12th year.