Microsoft announced this morning the launch of Skype for Business for Mac Preview  – the business-focused version of Skype’s communications services aimed at a commercial client base. I.T. administrators and individuals can sign up to test the new desktop software, which introduces features like Outlook integration, additional security, and calls that allow for up to 250 people versus Skype’s 25 max. However, Microsoft says invites will roll out first to I.T. admins before becoming more broadly available.

The company says the Preview build will be released in three stages, starting with today’s launch, before the public version is made available.

Interested testers can visit SkypePreview.com to sign up for an invite. Once an I.T. admin receives their invite, they can then choose to share it internally in their organization with other testers.

The new Mac Business client has some handy features for those in the corporate world, including the ability to see your meetings for today and tomorrow pulled in from your Exchange-powered Outlook Calendar, right in the Skype for Business app. 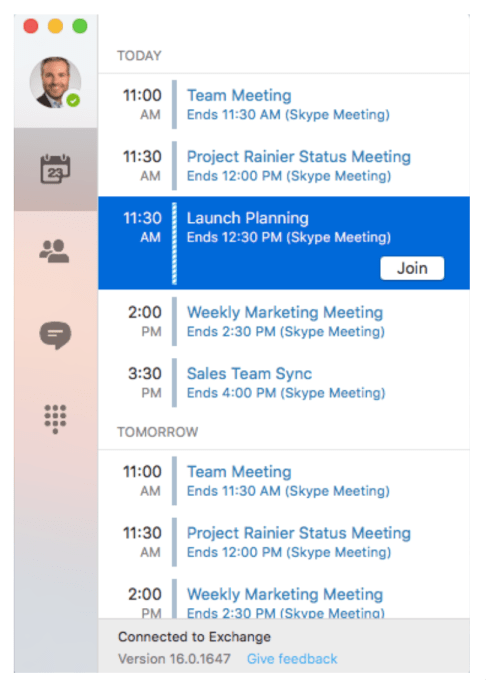 In addition, users can join in meetings with a click, use full screen video, view content, share screens, and chat while in meetings, as well as invite others to join.

There’s also a “Meet Now” option in the Meetings menu for more spur-of-the-moment meetings – like those that come up as a result of a chat, for example. This feature aims to best the newly launched calling option from upstart competitor Slack, which last month debuted a way to launch conference calls in its app that others could also join with a click.

In the next Preview release arriving this summer, Microsoft will add instant messaging, presence, and the contacts list. The third release will introduce telephony features. Without these features, Skype for Business for Mac is not something I.T. will likely want to roll out company-wide at this point. Instead, the idea is to simply start testing the software for issues and help offer feedback on what’s working and what’s not.

The Mac app takes advantage of APIs from Mac OS X El Capitan, says Microsoft. It also joins the mobile builds of Skype for Business, which launched to the public on iOS and Android last year.