Postmates, the delivery app, is often seen as emblematic of the struggling on-demand businesses. Countless venture capitalists have told TechCrunch that the company, despite its popularity with consumers, is doomed because its unit economics don’t add up.

The costs of paying the couriers is greater than the money generated from delivery fees, according to the narrative.  And naysayers say that the financial struggles mean that Postmates will have trouble raising additional funding.

Yet the venture capitalists who backed the company defended it, promising that the business looked healthier than what the Silicon Valley echo chamber hypothesized. But without actual numbers, it was hard to say who was right.

So when we got our hands on documents that detailed Postmates’ financials, we were curious to take a look. It turns out that the truth is probably somewhere in the middle.

The files, dated last fall, show a glimpse at Postmates’ rapid growth in the delivery business, despite a competitive landscape which includes DoorDash, Grubhub and now Uber Eats. We’ve also obtained more recent numbers that suggest that the growth has continued.

The documents highlight Postmates’ gross profit margins, which we understand are now above 20%. This is not the same thing as actual profitability because it excludes operating costs, but it does demonstrate that Postmates brings in more revenue than what it pays the couriers. We are told that the costs associated with each transaction have been accounted for in COGS. (Postmates is also forecasting net profitability in 2017 – we’ve confirmed that they are still on track).

Postmates does not mark up the cost of the items– beyond the delivery fee, the customer does not pay more than what they would at the store or restaurant. But Postmates has 3200 merchant partners who pay 15-30% commission per transaction to be highlighted on the app, since the service is helping them facilitate more sales. The delivery business generates additional income from companies including Apple and Starbucks, which have used the Postmates API to integrate the ordering technology into their platforms. And Postmates sometimes gets bulk discounts, when they place large orders on their express delivery service, Postmates Pop.

Postmates only pays its workers per delivery because they are 1099 instead of salaried W-2 employees. (Yet if proposed regulation were to eventually require Postmates to hire full-time delivery personnel, it would fundamentally change their business model). 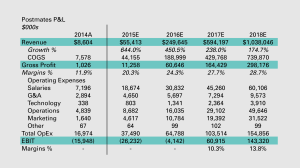 We’re also hearing that the actual numbers turned out to be better than what was forecasted in documents and that Postmates facilitated $56 million in gross merchandise volume  in just the third quarter of last year.  About $14 million of this was net revenue and gross margins were about 22%.

While the documents from last year listed the 2016 revenue forecast to be $250 million, we hear that the revenue this year is expected to be between $200-$250 million.

Postmates raised capital earlier last year at $5.27 per share, a nearly $500 million valuation. They are now in the process of raising new funding, although we’re told they have at least half of the financing from the last round in the bank. Existing investors are expected to participate. Some are hoping that the company could eventually even IPO.

But the venture capitalists who speak negatively about the on-demand category are correct that it has its challenges. There is an endless sea of competition and a similar business, DoorDash, faced some investor skepticism with a reported down round. Competitor SpoonRocket shut down. It is very hard to make the unit economics work and without the right partnerships, it can be impossible.

From Uber to Lyft, there are a handful of on-demand “unicorns,” with sky high valuations. But until one goes public, only the occasional glimpse at leaked financials gives us an accurate sense at how the businesses are doing.