Scandy is aiming to make it easier to print full-color 3D prints of photographs, from sources such as depth-aware cameras and technology like Google’s Project Tango. Scandy today announced it raised a $1 million angel/seed round from Callais Capital in an effort to bring the technology to a broader audience. 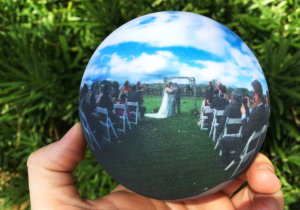 If you’re shooting 360 photographs taken with the rapidly growing number of 360 cameras, Scandy can make you some really nifty spherical prints. The challenge with 360 photography is, of course, that (most) screens are flat.

Using a VR headset is one way to solve that problem, and looking around a 360 world using a headset is undeniably appealing. However, as anyone who has ever stared at a map of the world in globe form knows, the only sensible way to look at these type of images in printed form is in three dimensions.

Of course, showing a 2D photograph of a 3D object puts us right back on the same problem, so here’s a video that illustrates why this is nifty:

Pretty cool, eh? Finally, a way for me to print those Ricoh Theta S pictures I’ve been capturing.

It’s not just about spheres, however; Scandy has a whole gallery of prints showing off what they’re up to. If you don’t have a 3D camera laying about, the company also creates its own iOS software to enable you to take full-surround photos.

“Scandy has an opportunity to define how users capture and consume 3D content. We are excited to be part of this tremendous growth opportunity,” said Hal Callais, Managing Director and CIO of Callais Capital Management. “By allowing a user to create 3D content, share it on social media, and order 3D prints from the same application, Scandy has made 3D easy for the average consumer.”

The company’s iOS app is live already, and the Android app is coming “by the end of the month.”