My kids don’t turn off the damn lights. Ever. And now, with Curb, I have a new way to see when they leave on their lights. All I have to do is look at an app. This is the future of parenting — and, well, energy monitoring.
Curb is a comprehensive household energy monitoring system. The system monitors the entire home by using sensors installed in the circuit breaker. For many consumers this means being able to monitor the energy consumed by a clothes dryer or electric range or all the outlets and lights in a bedroom. It cannot, however, easily monitor and report how much energy is consumed by a computer or espresso machine.

I had the system installed in my house over a month ago. It took licensed electrician about three hours. He had to install a sensor on each breaker and configure the system through an iPad app. This is not something an average homeowner can install themselves and that’s kind of the point.

Curb aims to serve a homeowner with data not previously available. Other energy monitoring services either monitor the entire home or individual outlets. Curb sits in the middle of the two at the circuit break box. Each breaker gets a sensor and an app can display real-time consumption information as well as a dollar approximation of how much the energy is costing the homeowner.

The data can be revealing and now I don’t ever want to use my electric clothes dryer again. 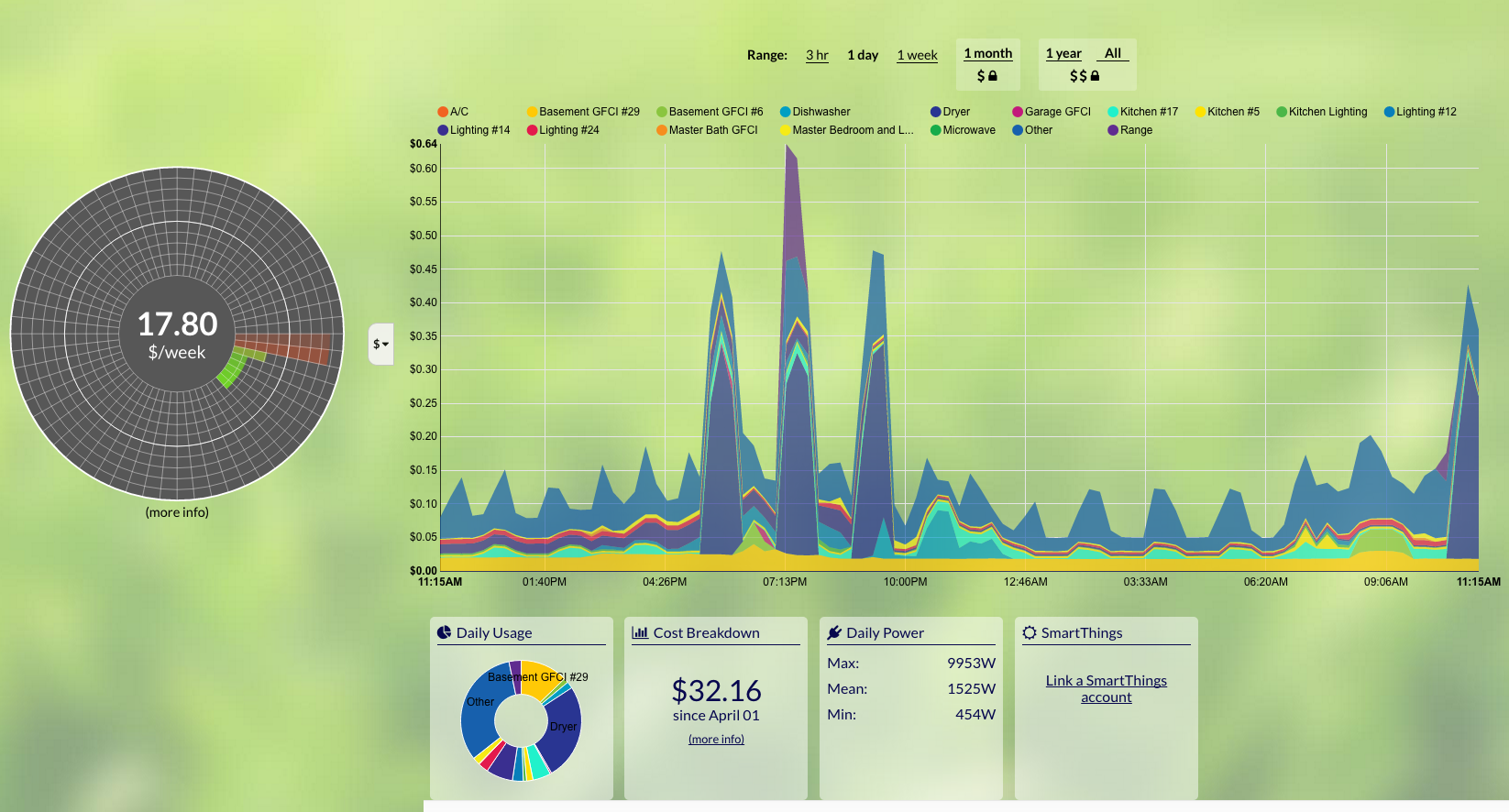 In the graphic above, you can see a few things. The yellow line at the bottom a basement circuit which powers a cable modem, file server and networking equipment. It never goes off. That circuit also powers the lights in the basement, where were used for family time just before 7:00PM. The large dark blue spikes are the electric clothes dryer. It’s brand new, too!

Just after 7:00PM on the chart, you can see when the stove was used and then again just before 11:00am (that’s when I made some eggs). Other highlights include the light green which is the other basement circuit. This was used just prior to 7:00PM for a movie with the kids and then again at 9:00 AM for a quick workout. 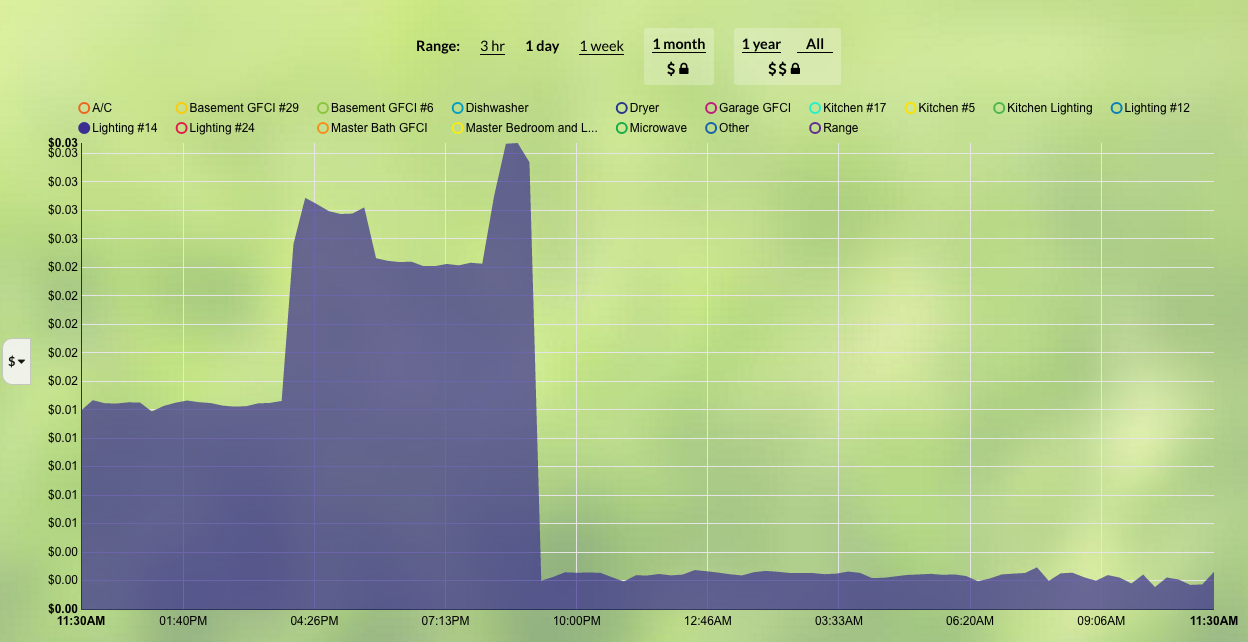 In this chart, you can see the circuit that powers my son’s room. He went to bed around 9:45, but apparently had on several lights nonstop starting around 4:00 even though I know he wasn’t in his room during that time. He’s the worst.

But what do I do with all this data? That’s where the system stops being useful. Obviously I can stop using my electric dryer and hang the clothes outside. Or teach my kids to turn off their lights. But I need help from there.

The system should be able to display more historical data. Right now all it can do is show how much energy a particular circuit consumed — but now a total amount of watts. It can show how much power a home has consumed over a set of dates and also what the average was during that period. But what about the individual circuits? I want the system to let me dial down to a granule level.

The web and smartphone app are basic at this point. The founder tells me the company is working towards implementing new features. The team is also playing with weekly emails that gives the consumer a breakdown of their energy usage and if anything abnormal occurred. Apparently, according to him, the system can identify when an appliance is consuming extra electricity, which could be a sign that it is nearing the end of its life.

Currently, just after launch, the user experience of Curb leaves me wanting more. It is collecting so much information about my energy usage yet I feel it’s not benefiting me in a major way. Of course I should use appliances less. 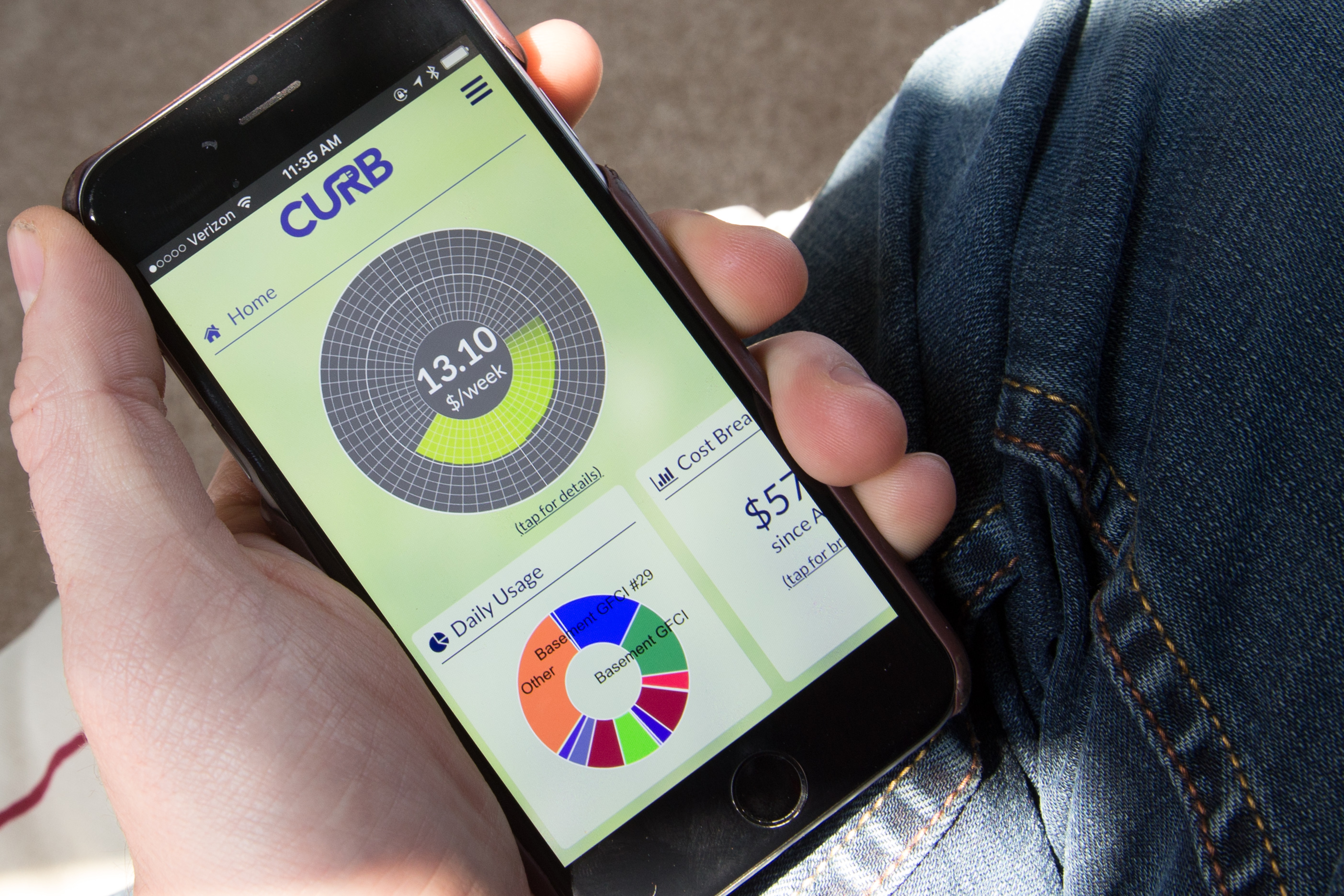 Yet the system shows a lot of promise in surprising ways.

A few weeks family and I were standing in line for the Easter Bunny. This was the day before Easter so we were in line for over an hour. And like any good parent, I spent the time putzing around on my phone. Mindlessly, I opened the Curb app and discovered the stove was drawing power though I thought I had turned if off. I texted my neighbor who went over and discovered the oven was still on.

Curb hails from Austin, Texas where a small team built the product. The company acquired $117,000 in preorders and pledges through an Indiegogo campaign and later went on to raise $1.25 million in seed funding from angels, strategic partners and Austin’s Capital Factory.

Currently Curb is available through Indiegogo and Amazon. The company has sold just less than a thousand units and are working with electricians to get these systems installed. Alternatively, Curb is talking with solar power providers to use the Curb system to monitor the energy output of panels while also providing the deep energy usage data.

Data is power and Curb has the potential to radically change how consumers use their electricity output. At the moment the system is rather basic and only provides a high level overview but hopefully as the company grows and expands, capabilities are added and new insights are gained.